If Only Matthew Brady Had This Robotic View Camera 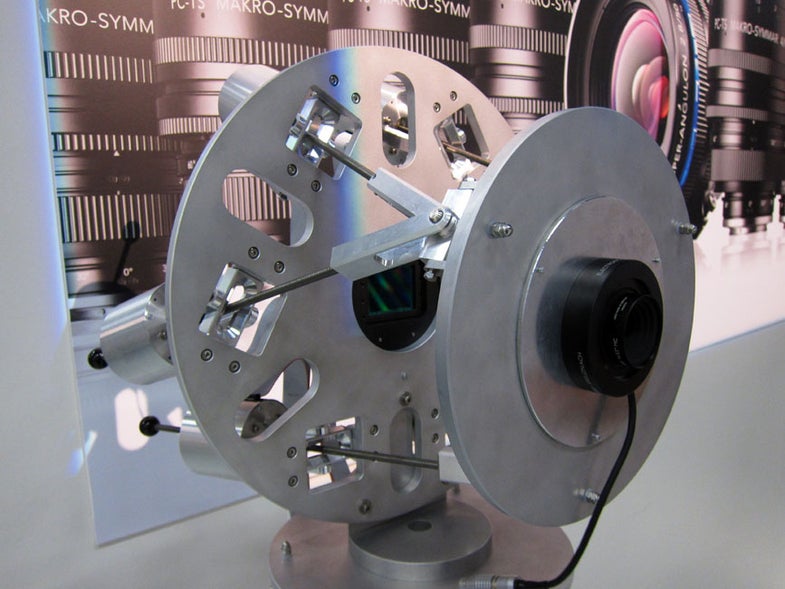 When complete, most of the machined metal body will be covered with a bellows system to keep out light.
SHARE

Tucked in a corner of the Schneider Optics booth, was by far one of the coolest demonstrations at Photokina 2010. The CAPcam, developed by GFAE, is a fully robotic view camera that is controlled by an individual running software on either a PC, Mac or a Windows 7 tablet (no iPhone or iPad compatibility just yet). The software offers complete independent control over the position of both the lens and the sensor, which allows for all kinds of creative focus and composition effects without having to spend hours under a dark cloth.

As you can see in the video below, a series of actuators move the machined plates automatically. The base plates that are holding up the camera work in the exact same way, allowing for movement of the entire rig. It has a wide range of motion, though this was a prototype and the final range is still to be determined. Because it can move so freely, it offers a multitude of cool features, like the ability to shoot stereoscopic 3D images (of stationary subjects) without the need for two cameras. It simply moves back and forth to capture different perspectives, which can later be translated into a 3D image. It can also capture huge panoramas, not unlike the Gigapan heads.

The controller we saw was a multitouch Windows 7 tablet, running prototype software (which is why we don’t have any up-close images). The positioning system looked robust, but easy enough to use. Another cool feature was the ability to to help match the focal plane to objects in the image. In the demo we saw, the operator locked onto a notebook that was set on an angle. When he tapped on the corners of the subject, the software placed small beacons on the screen and then automatically adjusted the lens and film plane to match the angle of the notebook. Of course, the software also stores custom positions for easy recall of commonly-used configurations. While the version we saw was just a simulation, it was extremely promising.

The process for correcting converging parallel lines was impressive, too. For those who are unfamiliar, this phenomenon is caused by perspective. If you’re taking a photo of a building, the lens and film plane will, obviously, be much closer to the bottom than the top. This causes the building to look skinnier at the top. A view camera can remedy this by changing the angle of the lens as it relates to the film plane. It can be an extremely tedious and time-consuming process, but the CAPcam was able to take care of it, requiring the user to simply move two lines to the desired position on the screen. It almost had the feel of playing an iPad game.

Because GFAE doesn’t make optics or sensors, they have equipped the CAPcam to accept a wide range of backs and lenses. The version we saw was using a Phase One digital back, but a DSLR can also be mounted in front of the rear plate (all of which will be hidden by bellows, of course) and used as a back, much like with Sinar’s P SLR view camera system.

GFAE didn’t have a specific price to give us, but were able to say that it’s “priced competitively with other view camera systems,” which should in no way be taken to mean “cheap.” It will be available early next year, at which point they plan to sell most of their stock to big time rental studios and other shooters that don’t mind trading big bucks for extreme precision. They also made it clear that they’re trying to appeal to the research field, as they plan to open up the operational source code on a case-by-case basis to allow for maximum tweaking.