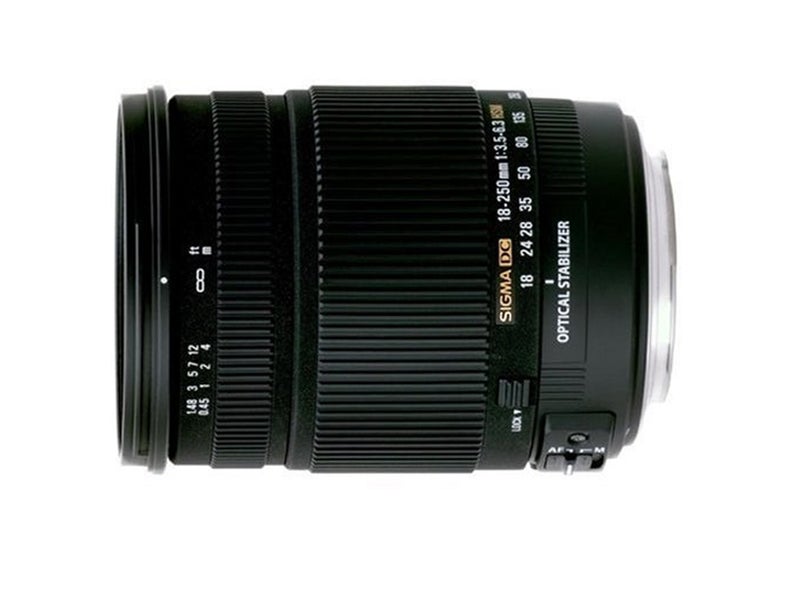 At 13.8X, this digital-only 29-400mm equivalent (on DSLRs with 1.6X lens factors) offers the broadest zoom range of any Sigma lens. Joining Sigma’s first digital-only superzoom of 2004, the 18-200mm, this $530 (street) lens adds optical stabilization (OS), four elements of super-low-dispersion glass (SLD), an internal focusing design that facilitates use of lensbarrel accessories, and an extra 50mm.

HANDS ON: Somewhat smaller (zoomed out) than Tamron’s comparable 15X 18-270mm VC optic, this attractive, matte-black lens is compact at 18mm, and notably light. The zoom action is very smooth for a lens that nearly doubles in length as it racks out. The AF action (on the Canon EOS 50D) is rapid and sure, even in low light, and the HSM motor delivers near-silent autofocus. Manual focus is well damped, but inoperable in the AF mode. Well marked with easyreading scales, the barrel also offers handy magnification ratios for its macro range.

IN THE LAB: On the Pop Photo optical bench, the lens produced SQF numbers in the Excellent range for the 18-, 35-, and 100mm focal lengths. As is common for superzooms, sharpness and contrast dipped at the longest focal length, here down two levels to Good. Performance is just a tad below Tamron’s 18-270mm at the 11×14 magnification, our benchmark for sharpness and contrast.

Light falloff was gone by f/5.6 at 18mm, f/6.3 at 100mm, and f/8 at 250mm, and the 35mm focal length produced no discernable falloff. That’s an average showing and not up to the Tamron, which produced no vignetting at three of four zoom settings.

Lab tests of the optical stabilization system for three different users discovered between one and three stops of extra handholdable sharpness, compared to non-OS shooting.

CONCLUSIONS: With its massive zoom range, optical stabilization, top notch AF, well-controlled distortion, and attractive macro performance, this handy lens has something for just about everyone.