It's sweet, hot and comes with a flash. 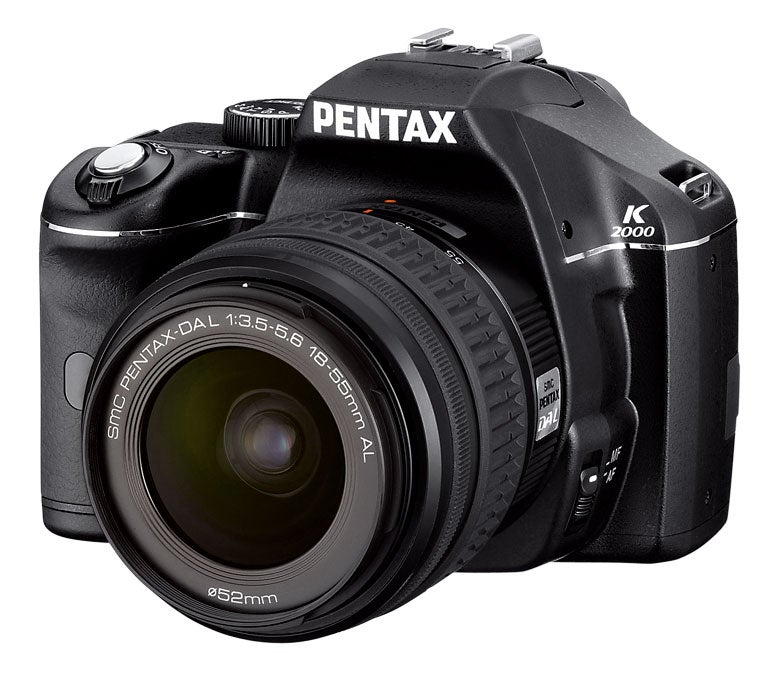 Pentax increased the burst speed to 3.5 frames per second for up to 4 JPEG or RAW shots, up from the K200D’s 2.8 fps. It includes the same Lo burst mode, which chugs along at 1.1 fps but allows unlimited JPEG capture up to the capacity of your SD or SDHC memory card. RAW capture stays capped at 4 frames.

What else has the K2000 inherited? The eye-level pentamirror with 96 percent coverage and 0.85X magnification, plus the same 16-segment metering system, including multisegment, centerweighted, and spotmetering options.

This shouldn’t be much of a problem though, since Pentax includes its compact AF200FG (GN 66) hot-shoe flash in the the K2000 kit. It covers the field of view of a 28mm (equivalent) lens and has a built-in flip-down diffuser to spread that coverage to 24mm. It neither swivels nor tilts for bounce, however, and it’s an inch shorter than Pentax’s next-larger flash, the AF360FGZ.

You won’t find live-view shooting, but the entry-level field is still split on this feature. The Nikon D60 and Sony A200 also lack live view, while the Canon Rebel XS and Olympus E-420 have it.

Image stabilization? It’s in here, making the K2000 the only entry-level DSLR beside the Sony A200 (and the K200D) to have it built into the body. (To be fair, both the Canon and Nikon include kit lenses with image stabilization.) Olympus makes you step up to the E-520 for this.

For budget-minded shooters, in-body IS tends to make more sense, since it works with any lens. With a Pentax, you can use a K-mount lens that predates autofocus and handhold at slower shutter speeds.

Overall, the K2000 stacks up strongly against its competitors. We find the menubased control system more intuitive than some others — just one of the details that makes Pentax a favorite among savvy photographers who watch what they spend. The K2000 should help Pentax hold onto its stellar reputation.