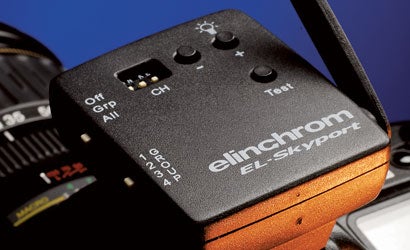 Last winter, I described Elinchrom’s EL-Skyport radio slave flash triggers in our coverage of the PMA annual trade show as being compact and affordable, but with a generic feature set. First impressions can be misleading.

Now, after extensive tests, I’ve found more. The EL-Skyports have all today’s wireless bells and whistles (digital signal encryption, transceivers, etc.) plus, as befits their Swiss heritage, a compact and stylish design. Switches are well marked, controls are intuitive, and the system is easy to use.

The Skyport Universal Trigger Set ($185, street) includes a matchbook-sized shoe-mount transmitter that sends a radio signal about 400 feet outdoors or 165 feet indoors — through walls and around corners — to the flash-firing Universal Receiver. Not quite up to the range of some competitors, but fine for most studios.

Compatible with most strobes, Skyports offer eight channels (to prevent false firing from other Skyports) and four work groups. I set one group each for main, fill, background, and hair lights, and could fire each independently to easily set lighting ratios — no more shielding the meter from the main light while taking a fill reading.

In addition to the Universal set, Elinchrom offers a Skyport set just for its RX-series strobes ($260, street). A five-pin RX-series transceiver mates with the RX head. Once it’s in place, up/down buttons on the shoe-mount transmitter let you set the strobe’s output from the camera (hooray!). That’s more control than most studio slave systems, and more convenience than most IR remotes.

Are Skyports rugged enough? I haven’t dropped one, so I can’t be sure, but the antennas do look vulnerable.

The last chapter of the Skyport story is a bidirectional Computer Remote/Trigger set ($354, street) that lets you control RX heads from the camera and/or a computer. Among other uses (and there are many), it lets you save and reset lighting ratios without ever touching an RX head.

Who should look into the Skyports? Any studio photographer who needs to fire a flash wirelessly, of course. But the RX strobe/RX Skyport combo should also be on the short list of anyone who’s upgrading to new strobes.

Q. In my indoor flash pictures, why are the backgrounds always dark, even when the room is well lit?

Q. You’re probably shooting in Program mode. Switch to Manual, which will automatically expose your subject correctly for whatever aperture you’ve set, and let you play with background brightness via the shutter speed. Set longer shutter speeds for brighter backgrounds; shorter speeds for darker.