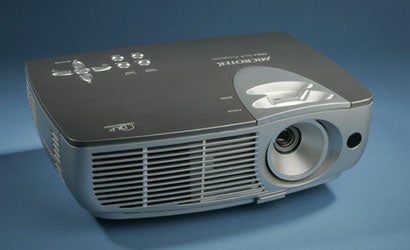 In November 2004, pop photo tested four digital projectors that were bargains at $1,000 each (“The New Digital Slide Show”). Fast-forward to early 2006: You can get a projector with the same resolution, array of features, and level of performance those four shared for $700 (direct)–the Microtek MS4. Now that’s what we call progress.

Of course, the deal comes with some limitations, such as the projector’s 800×600-pixel resolution. This is probably a lower resolution than your computer monitor, and you’ll be viewing the images when they’ve been blown up and projected on a wall. If you sit too close, your photos won’t look as sharp as they do in your digital darkroom.

That’s why, with an 800×600 projector, we recommend a compromise in picture size. Set the 1.16X zoom lens to its smallest picture size. This compresses the pixels, so it’s less likely to have a “screen door” effect. Also, view the image from a distance of at least two to three times the image’s height. We set the MS4 up 8 feet from our screen, for an image size 4 feet wide, and it looked great from our seat about 9 feet away.

Projected color was vibrant. As with most projectors, the Microtek MS4’s color wasn’t very accurate right out of the box; the picture had a blue-green cast. But after a few adjustments in the User Menu, the colors looked far more neutral. A full-scale calibration would do even better, but would cost more than $200.

If you plan to take this projector to a friend’s house, you’ll appreciate its small size (3.8x11x8.1 inches), light weight (4.5 pounds), and handy carrying case. And the horizontal and vertical keystoning makes for a quick setup, especially when the projector is set up in a less-than-ideal location.

Like most projectors this size, the Microtek MS4 runs hot. But it vents air out from the front, so the exhaust won’t bother viewers. Another nifty extra feature is the remote, which has a built-in laser pointer.

If you want an entry-level projector and don’t mind a low resolution–the best you’ll find at this price–the MS4 deserves a look.