The real strength of the 40D's Live View function is in the studio, where creative possibilities abound. Also, Windows users now have third-party software solutions for remote-controlled Autofocus. 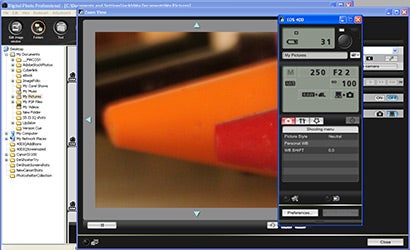 We’ll admit it. It took us some time to warm up to the idea of “Live View” functions on DSLRs. No more! Now that we’ve spent some time in the studio with the Canon EOS 40D and its Live View capabilities, we’re sold on its uses in the studio and other controlled situations.

Sure, there are times in the field when Live View on the camera’s LCD may come in handy for low or high-angle framing, but the real strength of Live View is in the studio, when the 40D is tethered to a computer and the view is displayed on your monitor via a camera control utility.

Mirroring the display to a computer monitor via the extra-long, shielded USB cord that ships with the 40D affords the studio shooter several real advantages:

• The camera can be positioned for the best possible shooting angle, with less concern about making it optical-viewfinder accessible.
• The display on the computer monitor can be displayed larger than is possible on the 3-inch LCD.
• The photographer, art director, client, and others can easily view an image on a computer screen at the same time, in real-time.

It is a very different feel than looking through the lens, and a mouseclick or hotkey doesn’t have nearly the tactile satisfaction of a shutter button, but it works. And in our tabletop experiments, it really helped make the shot without compromises, and without straining anything to peer through the viewfinder at wacky angles.

The shot of our studio set-up (see photo gallery) shows you where the camera is located: mere inches above the sweep. And between the tripod and lightstand legs, it was a clunky angle for employing the optical viewfinder, or even the on-camera LCD. But tethering the 40D to a laptop on a swiveling table allowed us to compose, focus the camera manually, and re-compose our shot from the sides of the sweep past the lightboxes. All this was possible even while keeping an eye on the composition in real time on the computer monitor and controlling the camera via EOS Utility’s remote shooting interface. Zooming in to 10x for focus confirmation was a real help, especially when we were a few feet from the monitor.

With this shoot, we were able to position the camera and lights in such a way that it was possible to adjust the focus by physically moving the lens’s focusing ring, since the EOS Utility software that is bundled with the camera does not allow for remote autofocusing via computer. All in all, we like what Live View on a computer monitor can do for the creative studio photographer. But the lack of an autofocusing abilities left us longing for a mouseclick solution.

Next Page****: An independent programmer to the rescue! (For Windows, only, that is.)

Just hours after we went to press with our Hands On article on the Canon EOS 40D, Chris Breeze of Breeze Systems announced the latest version of DSLR Remote Pro (Version 1.5) (street: $95), which brings remote-controlled Autofocus with the Canon EOS 40D to your computer monitor, provided that your computer is running Windows.

By simply clicking CTRL+F, DSLR Remote Pro runs a series of contrast algorithms, twitches the lens focus motor and runs the algorithms again until focus is achieved. It’s not lightning-fast, but it works. It took a few seconds to find focus on our high-angle floral macro piece; however, it was a lot easier than trying to climb atop a stepstool and dodge a lightstand and tripod legs as we recomposed to make sure our angle, lighting, and background were all perfect. Throw in overlay grids and flashing overexposure highlights, and DSLR Remote Pro becomes a very powerful addition to the studio photographer’s toolkit.

Trust us — it’s slow! You won’t be able to use Autofocus to track a basketball player approaching the net for a slam-dunk; however, you will be able to tweak your focus on the hoop itself.

If computer-controlled focusing was the only feature on DSLR Remote Pro, that would probably be enough for many photographers. But it doesn’t stop there.

• It can bracket up to 15 shots, changing either aperture or shutter speed — which will make many High Dynamic Range (HDR) photographers happy.
• It can be used to capture Time-lapse sequences.
• It can “Onion Skin” (fade back for overlaying and alignment purposes) a previous image for DSLR-based stop-action animation sequences or panoramic stitching.
• It can append IPTC data during capture for quick cataloging.
• There’s a focus-adjust functionality currently in the works that will allow for photo-merged, extreme depth of field via Helicon Focus or CombineZM.
• All these functions, asides from Live View focusing, will work with any current EOS camera, by the way!

It’s a bare-bones interface, not nearly as slick in graphical interfaces as the very capable EOS Utility, but this is certainly a case where function is fashion. We’d rather have the basic Windows skin with serious programming power than a pretty package minus functionality any day.

In either case, tethering your Canon EOS 40D to your computer for Live View photography adds a very cool dimension to your creative toolkit. Whether you use the included EOS Utility or trade up for the extras that DSLR Remote Pro offers is up to you. We just recommend you explore the potential of Live View as soon as possible!