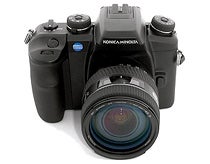 A fundamental truism of photography is that the single most effective accessory for sharper shots is the one most universally despised.

The tripod. Your lip curls just reading the word, doesn’t it? Clumsy, unpackable, finger-pinching pests that are heavy if steady, flimsy if light. Damn!

While there’s no substitute for a rock-steady camera support, a magic bullet called image stabilization (or vibration reduction, or optical stabilization, or anti-shake) can help you get sharper handheld shots at shutter speeds that would have once mandated a tripod. Since these systems were first introduced in 1994 (on a Nikon point-and-shoot) and 1995 (in Canon lenses for EOS SLRs), image stabilization has become mainstream technology. So we thought it was worth a thorough look at the current state of the art in anti-shake.

The state is pretty good, and getting better. As we speak, the two behemoths of the SLR world, Canon and Nikon, offer a range of stabilizer lenses, and a top independent lensmaker, Sigma, has just come out with an Optical Stabilizer lens. All these can be used with film as well as digital SLRs. The 8-megapixel Konica Minolta DiMAGE A2 EVF camera employs a unique “chip shift” Anti-shake system. And three digital compacts, the Canon PowerShot S1 IS plus the Panasonic Lumix DMC-FZ10 and DMC-FX5, use in-lens image stabilizers. Let’s, um, shake down all of them.

How we tested
To some extent, any realistic test of image stabilization has to be subjective: Human beings are going to hold the cameras and lenses in the real world, and so human beings-not “shake machines”-should hold them as part of the test procedure. We therefore had four editors, all experienced SLR shooters, handhold five representative lenses and three cameras, and averaged their results over 3,500 shots.

But the actual measurement of image blur was quite objective. Using our new DxO Analyzer software, we were able to measure precisely how much test images of a pattern of dots deviated from those of a crisp image.

A typical baseline “blur factor” (about 1.0) is the average score of a camera set to 1/100 sec, with a 100mm lens, mounted on a sturdy tripod, and fired by remote release. This is what can be expected in a handheld shot, stabilization off, by a very steady shooter-an Excellent rating. A blur factor of 2.0 represents the minor fuzziness you’d get by applying the Blur filter once in Photoshop. Up to about 2.5 we consider a Good rating. By blur factor 3.5, the image will be noticeably unsharp, but could be usable in modest magnifications after some sharpening was applied-a Marginal rating. A higher blur factor will give you an unusable image (unless, of course, you want blur), and we call that Unacceptable.

This test is also considerably tougher than the one we used back in 2001 (“Canon Image Stabilization vs. Nikon Vibration Reduction,” September) in which we shot the test lenses at infinity. Because this time we used a test target at relatively close distances, the angular displacement-the movement that makes the shake-was much greater than at infinity. The test distances were about what you’d use for a wildlife portrait with a 400mm lens, a head-and-shoulders portrait with a 100mm lens, and tight available-light candids at wide to normal focal lengths-typical real-world shooting distances.

The pictures at bottom of the facing page show the four blur levels on our test targets, and corresponding shots of our “test butterfly.”

The steady bottom line…
Our tests confirm what anecdotal evidence has suggested: You can generally expect to handhold lenses two shutter speeds slower than you ordinarily could, and sometimes stretch it to three.

But our tests also confirm that this technology is not a cure-all. Here are some caveats and tips regarding use of anti-shakers:

It doesn’t prevent blur due to subject movement. Except specifically for panning, anti-shake is not well suited to action subjects. Sports photographers-except those specializing in wheeled sports-usually don’t need it.

Anti-shake gives you consistency, not perfection. We got a huge variation in blur factor without stabilization as shutter speeds went down. In simple terms, sharp shots became a matter of luck. Anti-shake improves your odds, but won’t cover for sloppy technique.

Practice makes better. Use the stabilization in the viewfinder as a form of biofeedback-wait until the image calms down, and fire the shutter gently during that lull. With Nikons, you can choose to have VR actuated only at the moment of exposure, but we don’t recommend this.

You can use slower speeds the farther away the subject. We tested at moderately close range, where shake is magnified. At infinity, you might gain as much as two more shutter speeds over our “safe” speeds. Conversely, in tight close-ups, you may need faster speeds.

Think depth of field. Nature shooters love anti-shake-it lets them stop down an aperture or two for more focusing accuracy in close-ups.

Little cameras are steadiest. Good results handheld at 380mm or 420mm at 1/50 sec-and slower? The Lumix, PowerShot S1, and DiMAGE A2 blew everything else out of the water. These cameras are easy to hold steady, and have no SLR mirror slap or focal-plane shutter shudder.

Steady shooters, beware. Paradoxically, human tripods can see greater quality dropoff as they go to slower speeds. Steady holders can get away shooting at lower speeds than shaky shooters, but at the point where they can no longer keep the camera steady enough, they may be using shutter speeds so low that even anti-shake won’t help much.

Take a picture with shaky hands and/or a too-slow shutter speed and you get a blurry image. The image blurs because it’s moving across the imaging plane while the shutter is open; the picture quite literally smears across the frame area.

Optical image stabilization works by shifting the image projected through the lens in an equal and opposite direction to the movement of the shake. This is done with a motorized 1.0X corrector lens or lens group located at the optical center of the lens. (The other system in use, Konica Minolta’s Anti-shake in the DiMAGE A2, shifts the CCD to compensate, but the principle’s the same.)

Fine, but how does the corrector know which way to shift, and by how much, and in real time? That’s where the second major component of image stabilization comes in. Motion detectors (tech types know them as microaccelerometers, or gyro sensors) measure the amount and direction of shake, and transmit this information to a CPU built into the lens. The CPU in turn directs the corrector motors to shift accordingly.

And, voilà, your picture is sharp.

Anti-Shake for tripods?
Should you leave image stabilization on or off with your camera mounted on a tripod?

It’s not a silly question. After hearing that stabilization was degrading tripod-steadied shots, Canon researched the issue and found that IS may actually try to “compensate” for steadiness. As the company’s report noted, “When there’s not enough motion for the IS system to detect, the result can sometimes be a sort of electronic ‘feedback loop,’ somewhat analogous to the ringing noise of an audio feedback loop we’re all familiar with. As a result, the IS lens group might move while the lens is on a tripod, unless the IS function is switched off and the IS lens group is locked into place.”

For this reason, makers of anti-shake lenses recommend that you turn off the system when the lens is mounted on a tripod.

But Canon didn’t let it rest there. On a number of Canon IS lenses (listed below), the IS sensors can detect that the lens is being held steady, and automatically engage a “tripod mode” that detects and corrects for mirror slap and shutter movement at slow shutter speeds.

But don’t try following a moving subject like a bicycle rider-the motion sensors will do their damnedest to “correct” your panning motion, resulting in a totally blurry mess.

The answer is to disable the horizontal axis of stabilization, leaving only the vertical axis active. This lets you pan a moving subject, at the same time counteracting your up-and-down shakiness to produce a nice, smooth pan with a creamy blurred background.

This was the innovation Canon put in its IS lenses, and termed Mode 2 stabilization, activated by a switch on the lens. Sigma uses a similar approach.

Nikon has panning stabilization, too, but there’s no switch. When the VR sensors detect smooth horizontal motion, it automatically puts the lens into panning mode.

All sorts of factors come into play with panning, most notably the ability of the shooter to keep a steady bead on a moving subject (made more difficult by SLRs’ viewfinder blackout). It comes down to probabilities: an experienced shooter can expect to get more sharp pans with stabilization than without, but not a perfect score.

Keep in mind that panning stabilization won’t give you sharper shots of any creatures that bound or bounce while running-they will still blur in the vertical direction.

(A) Up-and-down shaky: Shot without image stabilization, background blur curves and is uneven due to vertical movement of the camera during exposure. Rider is unsharp.
(B) On the level: Panning stabilization counteracts vertical shake for a sharp shot of the subject and smooth straight background blur.

Maxxum Steadiness
When we first got a look at Konica Minolta’s “chip shift” Anti-shake System in the DiMAGE A1 (forerunner of the current A2), we said, Wow, put something like that in a digital SLR, and you’d have image stabilization across the system’s entire lens line.

And Konica Minolta did. Or, we should say, will do when the Maxxum Digital SLR is introduced this fall. KM was mum on how similar the new Anti-shake system would be to the one currently used in the A2, but we suspect the fundamentals will be the same.

It will be an interesting addition to the competitive mix, given that Nikon’s and Canon’s stabilization systems are available only in dedicated-and higher priced-lenses. A spokesman for Canon questioned whether KM would be able to make Anti-shake work across the lens line. “Konica Minolta’s approach may require a new set of lenses with larger coverage (circle of illumination) to accommodate the movement of the image sensor during the stabilization procedure,” he said. “Canon’s IS lenses, on the other hand, already have this capability incorporated in their design.”

KM would say only that, because the new Maxxum Digital SLR will use a smaller-than-35mm APS-C size chip (16.7×25.1mm), current Maxxum lenses “in theory” could work with Anti-shake. (The 35mm format requires a circle about 43.5mm, while the APS-C chip requires only 30.1mm diameter.)

Nikon and Canon, of course, have the estimable advantage of a large installed base of digital SLR users, both consumer and professional, while Minolta is rather late to this game. Both Canon and Nikon stated that they will continue to develop anti-shake lenses and work toward further improvements in these systems.