1st Place: Jamming Jellies Underwater photography without getting wet? Sure, just ask SNEHENDU KAR. A professor at UCLA’s School of... 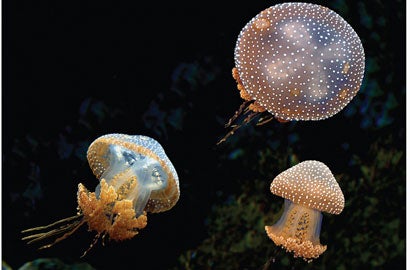 Underwater photography without getting wet? Sure, just ask SNEHENDU KAR. A professor at UCLA’s School of Public Health, the 72-year-old likes to photograph at the Long Beach (CA) Aquarium. To avoid flash glare, he positioned his camera at a 45-degree angle as close to the aquarium window as he could get it without touching the glass, and prefocused on a spot.

“I had to take hundreds of pictures for just a few that came out well,” he tells us.

Early one evening, Chicago resident STEVEN JONES hit the streets with his camera, a tripod, and a friend, planning to shoot the “amazing” colored lights of the bridges downtown. Instead, the 17-year-old, now a senior in high school, turned around and caught this passerby in a composition seemingly made for black and white.

“I cropped the photo square to eliminate a lot of buildings on the left cluttering up the scene,” he says. “I’ve been experimenting with the square format lately.”

As soon as it stopped raining in Oxford Station, Ontario, WENDY STEVENSON, 45, grabbed her camera and ran to the back yard. “Rain is such a great saturator of color,” she says. The stay-at-home mother found this ladybug clinging to a shasta daisy.

Not shy to direct her model, “I scooted him over a bit,” she recalls. “He was very obliging.”

“Barcelona is so rock-and-roll,” says JEREMIAH WILSON, 24, of his weekend spent roaming the Spanish city with his camera. Night scenes like this one “are pretty much what I shoot now,” says the pro photographer from Warren, IN. “The exposures last minutes or even hours. You’re just digging the scene while you’re waiting for the camera to capture the image.”

ERNEST LEE, a 51-year-old teacher from Hong Kong who now lives in Sydney, Australia, set a tough goal for himself: to photograph this type of dragonfly on the move, legs tucked aerodynamically close to the body. This one flew around his head for 10 minutes, forcing him to focus manually.

But he was unhappy with the “boring” background, so later he sought a setting whose color matched his subject, then digitally sandwiched them together.