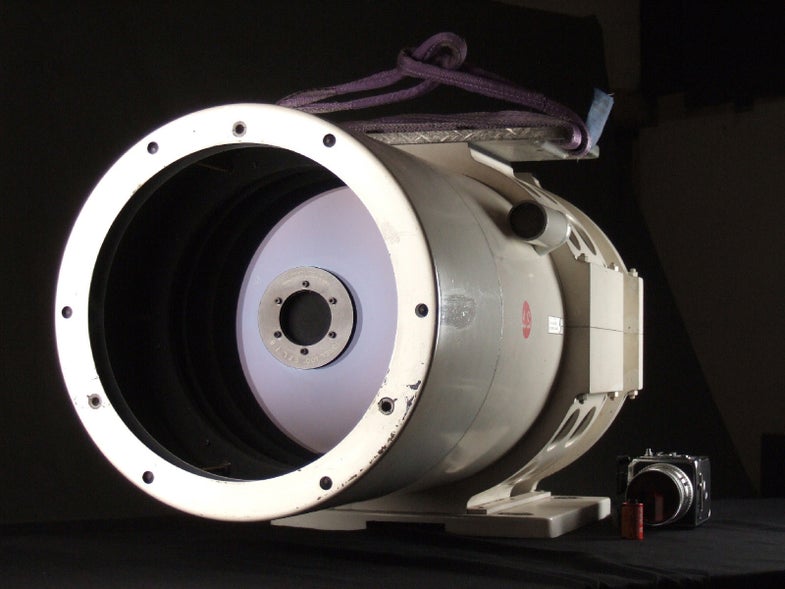 NASA is responsible for some of the coolest gear on earth, full-stop. Their crazy demands for gadgets that perform insane tasks have resulted in some truly amazing pieces of equipment. This enormous Jonel 100 2,540mm F/8 mirror lens is no exception.

There isn’t a ton of authoritative information about this massive lens on the auction page, but it does suggest it was used with a Photosonics 70mm 10R camera that shot up to 125 6×6 frames per second. That’s a lot of film stock to churn through.

Shipping on the auction is set at $350, which actually doesn’t seem that outrageous since it likely needs to be shipped as freight. The total asking price of the lens, however, comes in at a cool 33,500 Buy It Now, so maybe cutting a little discount on shipping is worked into the asking price.

Lenses like this really are pretty amazing. You need an impressive tripod to hold the thing and a focusing unit to use it. It’s also likely that when it says F/8, it’s not saying that’s the maximum aperture, but rather the only aperture. Feel free to correct me if you’re familiar with this thing and Im’ wrong.

This likely isn’t something someone would ever buy and shoot with, but if I was every Terry Richardson rich, this is the kind of cool stuff I would buy to display and use for cool Frankenstein DIY photoshoots.