A clever classic camera that shoots 360-degree panos on film 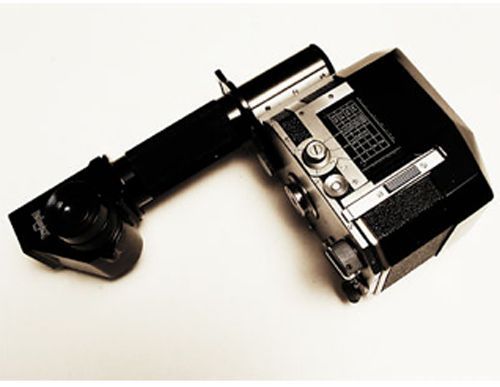 As with many things, smartphones have spoiled us when it comes to shooting panoramic photos. Now, we can simply select the pano mode in our cameras, rotate and shoot. It wasn’t always that easy, though, and there were special cameras made specifically for committing ultra-wide viewing angles to film. This Japanese Panorax-ZI camera was built for that specific reason.

Rather than a traditional aperture and shutter mechanism, the camera has a vertical slit. The film is exposed through the vertical opening and the camera is then rotated, which basically paints the image across the film. You can shoot up to 360-degrees with the camera, which takes up a fair bit of your film roll.

Lomography actually sells a modern version of this kind of panoramic camera called the Spinner 360. That one actually has a string you pull in order to rotate the camera. It’s clever, but doesn’t quite have the same appeal as this vintage model.

The Panorax also appears to have a periscope finder, which I’m guessing is so you can use the camera above your head, thus preventing a large portion of the panorama from being taken up by what is essentially a selfie of you holding the camera itself.

The auction is sitting a just under $20,000 at the moment, but I would be surprised to see it fetch that much since it’s something of a novelty and the big bucks are usually a lot easier to command when it comes to a big name camera maker like Nikon, Canon, or Leica.