The best new gear and accessories from the showroom floor. 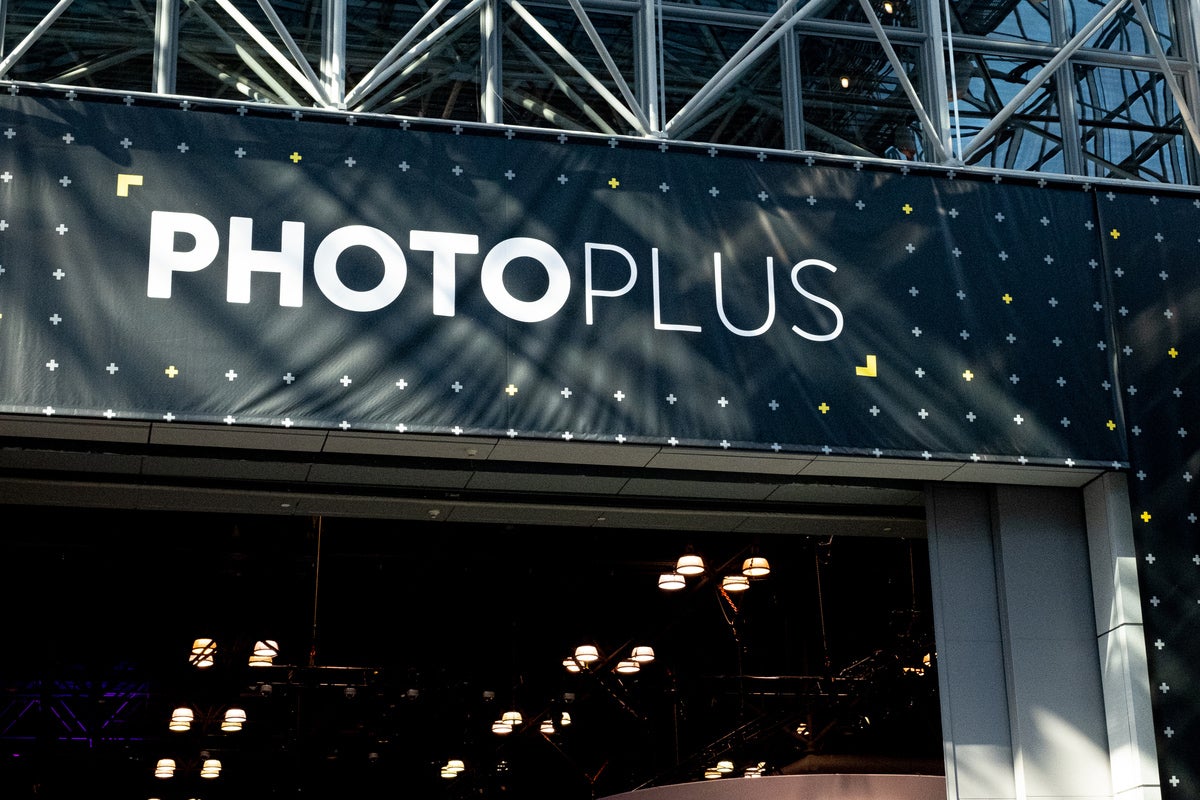 The PhotoPlus Expo kicked off today New York City with three days of talks, workshops, portfolio reviews, and, of course, new camera gear and accessories. This annual show is an excellent opportunity for photographers to check out new products in-person. We’ve spent the afternoon scouring the showroom floor for the best new products available to photographers. Here’s what we’ve loved so far.

Prototypes of the forthcoming 1DX Mark III lived under glass in New York City. While we still don’t know when the new flagship will be available to the public, the development announcement did include some exciting tech specs. The camera will have a brand new CMOS sensor and DIGIC processor, the ability to capture 10-bit stills using HEIF, an enhanced autofocus system with improved tracking and an autofocus sensor with approximately 28 times the resolution of the 1DX Mark II. Expect to see them abound at the 2020 Olympics.

The Fujifilm X-Pro3 is a digital camera that will make you think a bit more like a film shooter. The new camera essentially has the guts of the DSLR-shaped X-T3, but a hidden LCD screen encourages users to slow down and compose through the viewfinder. We got some nice hands-on time with Fujifilm’s new X-Pro3 earlier this week, but the company had some samples of the two new colors on the showroom floor in New York City. This Duratect Silver version reminds us of an old Contax camera, which is a very good thing. 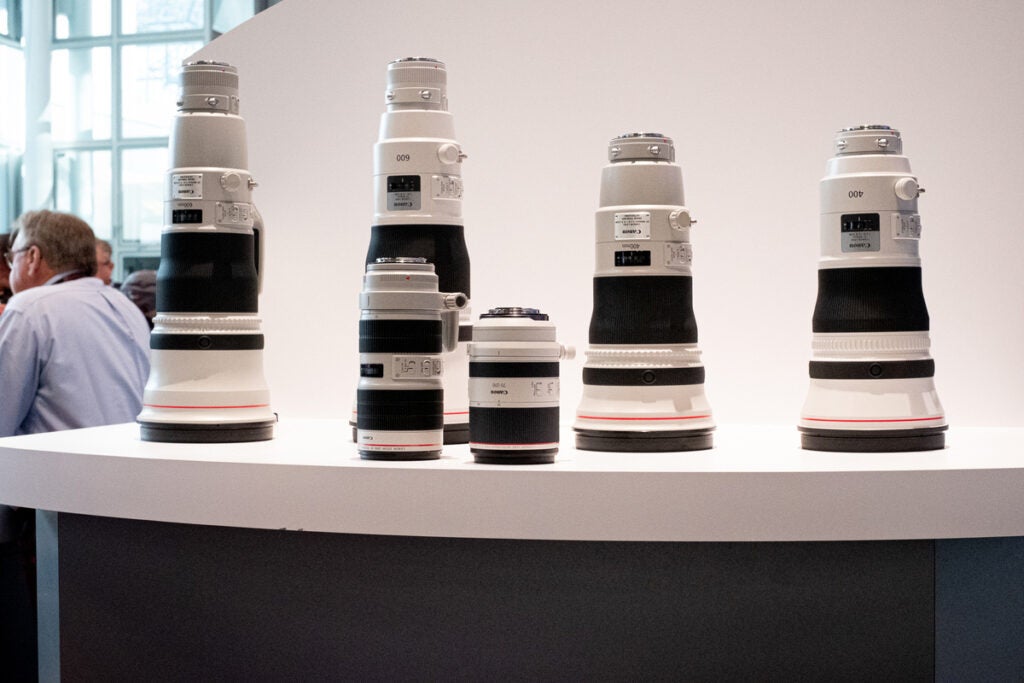 Canon’s two new RF lenses, the RF 85mm f/1.2 and the 70-200mm f/2.8, were also on view at the Canon booth. These are the ninth and tenth lenses for Canon’s mirrorless system, and both are impressive in their own right. The 70-200mm f/2.8 is one of the world’s shortest telephoto lenses—it’s compact size is even more evident when you see it compared to Canon’s other telephoto glass. The RF 85mm f/1.2 features a new DS coating, that gradually decreases the transmittance of light in the image to create beautifully blurred backgrounds. We weren’t able to actually shoot with the version that was on the showroom floor, since it was a pre-production model, but looking through the massive piece of glass gave us better insight into its nearly $3000 price tag.

Nikon’s very pricey and very niche lens, the 58mm F/0.95 Noct was available for some in-booth shooting for the first time ever. The $8,000 manual focus lens is one of the fastest the company has ever made, and although it’s specifically made for niche subjects like astrophotography, it can give shooters some pretty interesting results with portraits as well. The lens has 17 elements in 10 groups, and, while it’s a bit of a monster when attached to the Z camera, the bokeh is really impressive.

Sigma’s super compact full-frame fp camera was on display in New York City. We learned about this camera over the summer, but this was the first time we got a sample in our hands. It’s tiny, but solid. The camera uses Leica’s L lens mount and is built around a 24.6MP BSI-CMSO Bayer sensor—a departure from the Foveon sensors you might expect in a Sigma camera.

Sandisk’s new Extreme Pro Portable SSD has a read speed of up to 1050MB/s and comes in 500GB, 1TB and 2TB versions. It has a forged aluminum body that protects the SSD core and helps keep it cool. This rugged little drive has an IP55 rating for dust and water and higher impact resistance compared to its predecessor. It connects with USB Type-C and Type A, and it’s small size makes it perfect for a photographer on the go. 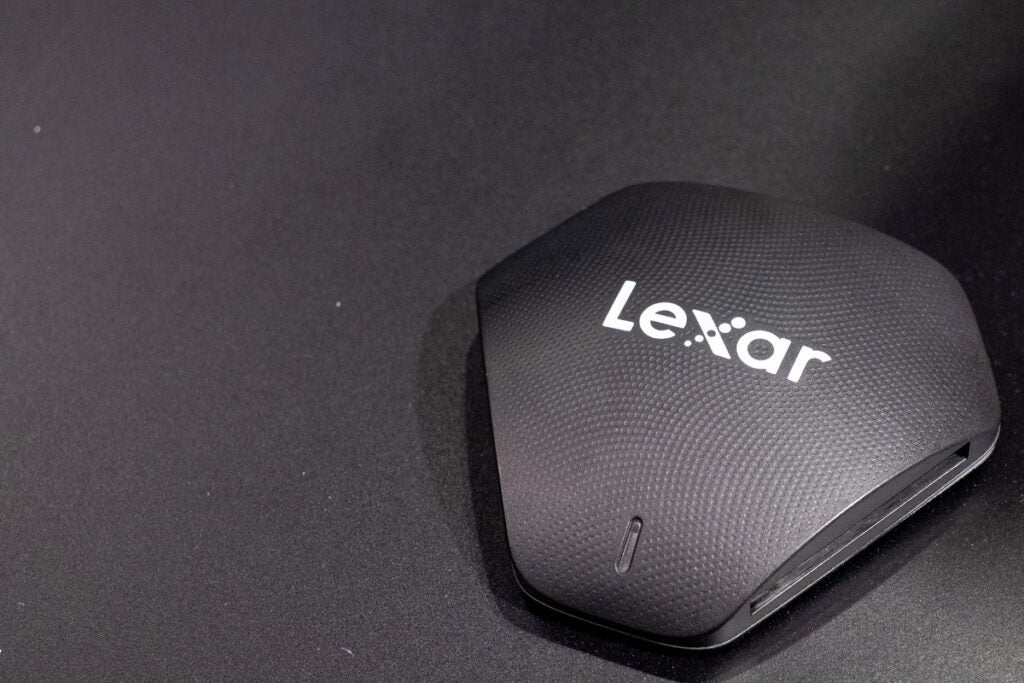 A compact multi-card reader from Lexar. 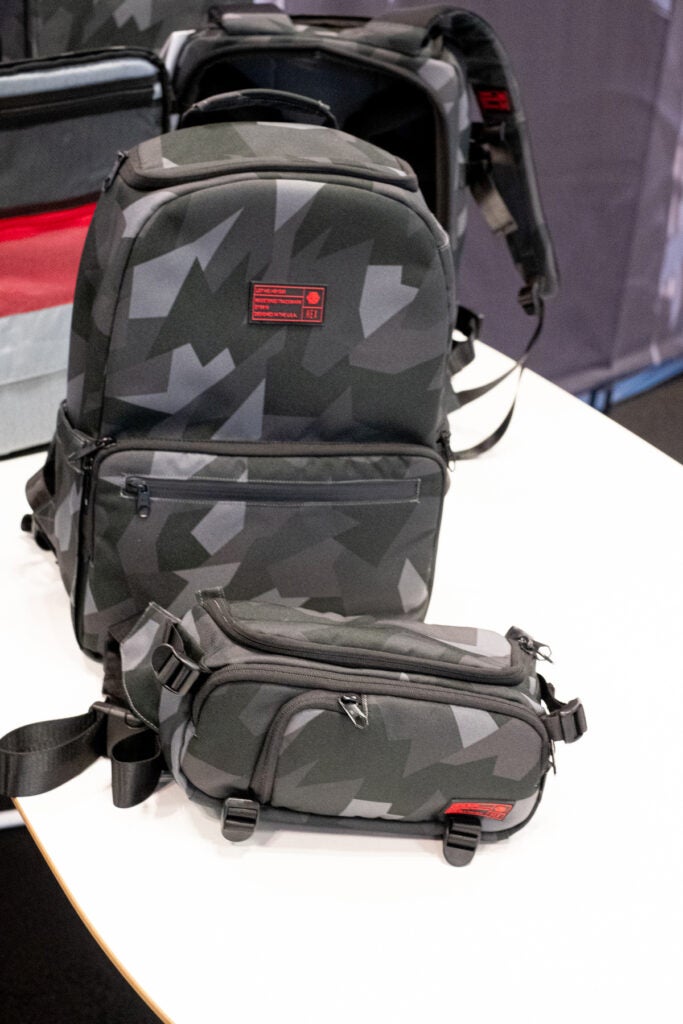 HEX’s new compact backpacks and slings should be available just in time for the holidays.

We’ve been using and loving HEX’s camera backpacks for a while now, and although they are great for travel, they can be a little bulky for everyday use. That’s changing though—in part, they say, because of the feedback from women who have been using the bags. This December the company will be releasing scaled down versions of the backpack and sling bag. The new compact designs come in all three colors: black, blue camo, and green camo. 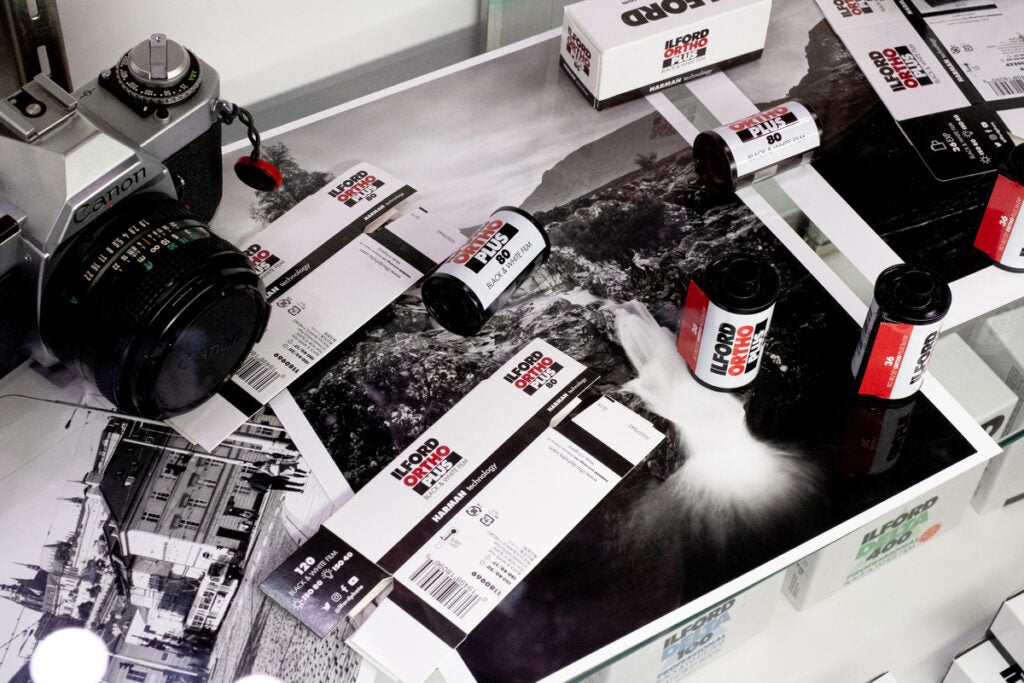 Ilford has a ton of new analog products hitting stores, including a brand new ISO 80 film.

Ilford had an array of exciting new products on the showroom floor at PhotoPlus. First up there is a brand new film called Ortho Plus that comes in 120 and 35 formats. It’s an orthochromatic black and white film that is rated at ISO 80 and isn’t sensitive to red tones and has a fine grain and sharpness.

Ilford also announced the fifth generation of its best-selling Multigrade RC darkroom printing papers—the last update came 25 years ago. According to the company the new emulsion on the paper has been in development for the last eight years. The new version has a slightly warmer base tint, deeper blacks and offer a more consistent contrast throughout the tonal range. 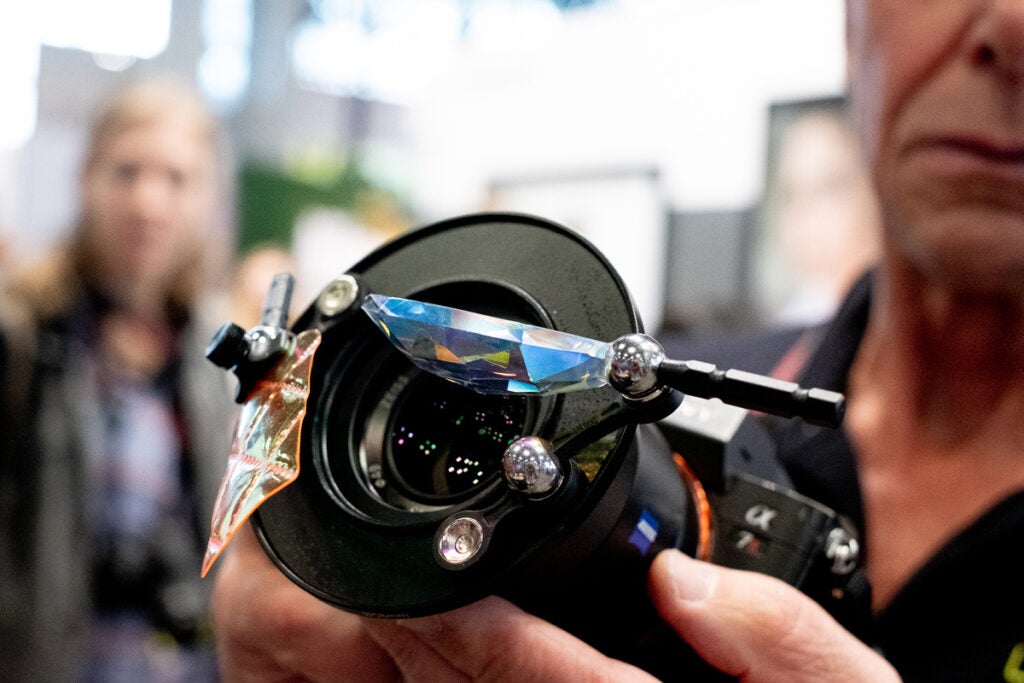 Add a pop of color to your images with Lensbaby’s add ons for the OMNI Filter System.

Lensbaby had a new pack of colored accessories for its OMNI Filter System on view on the showroom floor. These multi-colored crystals, films and gels attach to the front of the specially designed Lensbaby lens filter using magnets and allow photographers to inject a range of colored tones into their scene. Unlike other Lensbaby products the OMNI Creative system works with standard zoom and prime lenses. 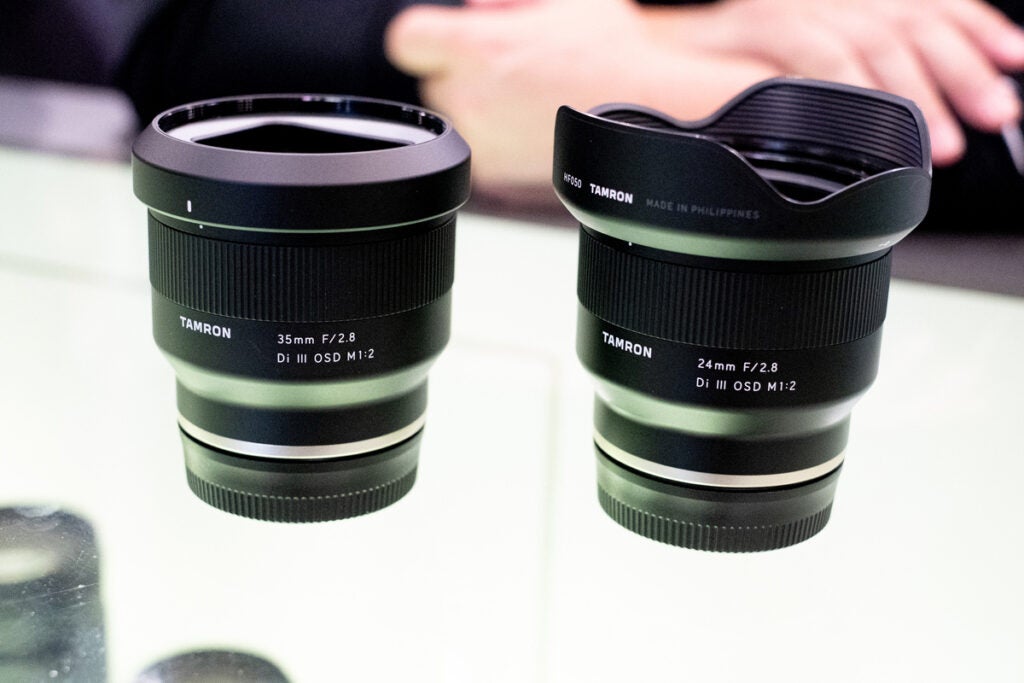 Tamron announced a trio of wide F/2.8 prime lenses for Sony shooters at the show: a 20mm, a 24mm, and a 35mm and a 70-180mm telephoto zoom lens. The lenses all have the same 67mm filter size, moisture-resistant construction, and a fluorine coating on the front element to prevent fingerprint smudges. The lenses support Fast Hybrid AF and Eye AF features in Sony cameras, plus they are a lot more affordable than Sony’s native lenses.