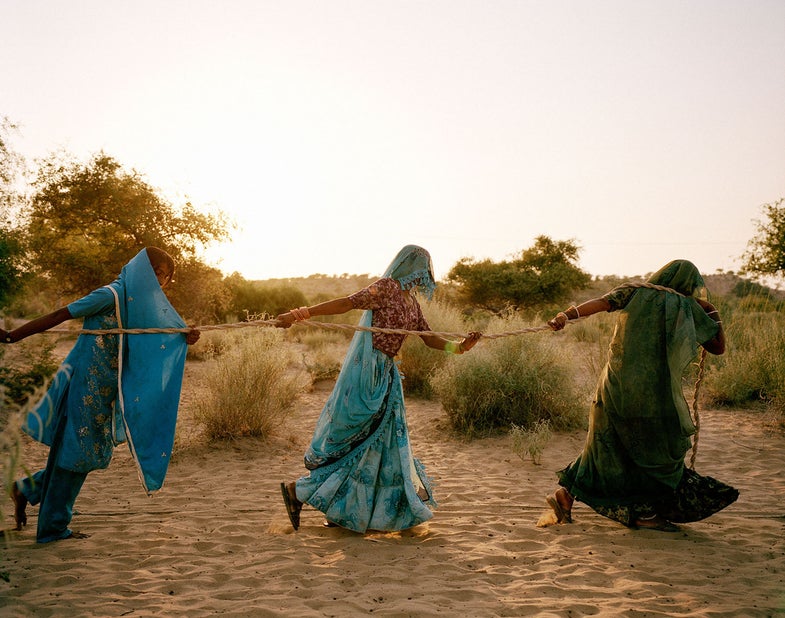 Syngenta Photography Award: Professional Commission Caption: Women pull well water together Photographer: Mustafah Abdulaziz Email: abdulaziz.mustafah@gmail.com Address: 58 Metropolitan Avenue, #4C, Brooklyn, New York, 11249, Uganda Location: Tharpakar, Pakistan Taken at: 2013-09-24 Medium: Medium format color film Size: 6x7 Additional information: Women of Tharpakar in the southern Sindh Province of Pakistan work together to pull water from a well. Even when one person is done, they all remain at the well to share in the task. One of the effects of the flooding was salinity in the ground, which affected the ability for the agricultural region to support itself. The water gathered is brackish and dangerous to the health of children, who often suffer diarrhea and other water-borne illnesses.
SHARE

The environmental photo award from Syngenta just announced the winners of their second photo competition titled “Scarcity-Waste.” Mustafah Abdulaziz won first place in the Professional Competition for his ongoing “Water” series that tracks water issues around the globe. Abdulaziz will take home $15,000 USD plus a $25,000 USD commission for the winning work. Benedikt Partenheimer was named the first place winner of the Open Competition for an image made in Shanghai, China, documenting particle pollution. Partenheimer will take home a $5,000 USD prize.

The shortlisted photographers in the Professional Competition also included Rasel Chowdhury in second place with a project called “Desperate Urbanization” about the relationship of the people of Dhaka to the river Buriganga. Richard Allenby-Pratt took third place with a project called “Consumption,” that explores the continued development and rapid depletion of resources in the United Arab Emirates. Camille Michel came in second place in the Open Competition for an image from Uummannaq, Greenland, and Stefano De Luigi took third place with an image made from a story about drought in Kenya.

The second edition of this biennial award drew over 2,000 entries from photographers in both categories covering photo stories about natural resource depletion, environmental degradation, and wasteful consumption around the globe.

Images from the winners, shortlisted finalists, and an additional 30 entrants will be on view at London’s Somerset House through April 10, 2015.