When A Picture’s Worth About 15 Words

“Feet.” “Latte with foam shaped like a heart.” “Airplane wing as viewed from two seats back.” Can you spot the... 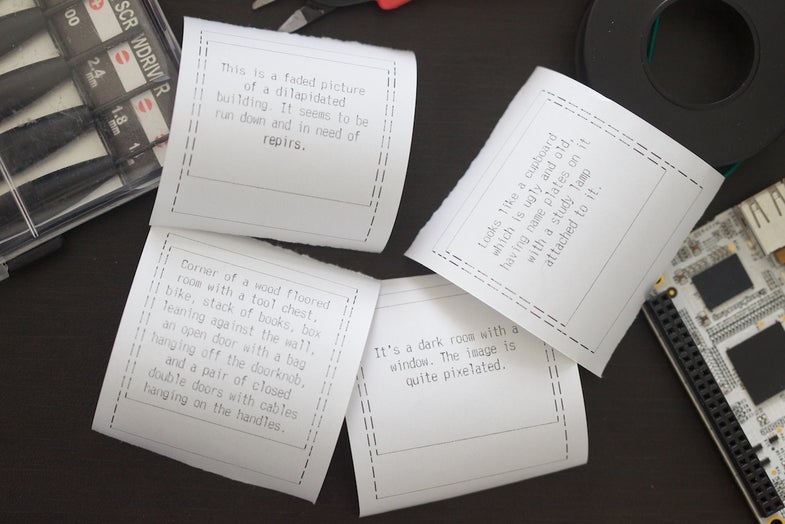 “Feet.” “Latte with foam shaped like a heart.” “Airplane wing as viewed from two seats back.” Can you spot the connection between these phrases? They’re somewhat random, quotidian observations, kind of like what you might find on social photo sharing site Instagram–and indeed, these are all tweets from a new account called @textinstagram, which is poking a little bit of fun at the users of the service. Each tweet on @textinstagram is a literal text representation of an Instagram photo. It’s a good joke, as long as you’re familiar with the popular stereotype of Instagram photography as meaningless snapshots of everyone’s lunch. Obviously there’s more to Instagram than washed-out photos of sandwiches–Michael Schmelling is one of many excellent photographers using the service–and it’s funny that one of the initial complaints lodged against Twitter itself was that it was only a way for self-important Silicon Valley types to broadcast trivial information about their day.

Perhaps predictably enough, there’s already a slew of copycat accounts: even though @textinstagram is less than a week old, there are already fake “text-only” versions of Tumblr and Facebook on Twitter. I’m wondering whether anyone will create a “text-only” version of some famous photographer. Here’s a quick stab at a “Text-only William Eggleston”: “The golden sheen of a 1965 Ford Mustang.” “Glass of whisky, two-thirds consumed, ice melting slowly.” “Two shopping carts catch the last ray of sunlight.” “Yellow.” I wouldn’t be surprised to see a few more accounts like this pop up.

Another project in this same space is called “Descriptive Camera,” by Matt Richardson. The Descriptive Camera is a camera which doesn’t produce images, but small pieces of descriptive text. The device uses a USB camera plugged into a tiny computer, which sends the image off to Amazon’s Mechanical Turk service, where a human being types up a description which is printed out on a slip of paper. It’s all a bit less tongue-in-cheek than @textinstagram, though the intentions of the two projects aren’t entirely different. In their own way, they each explore the relationship between pictures and words, and how far we’ve come from equating one of the former with a thousand of the latter.