A helicopter carrying aid to stranded Yazidi civilians in Iraq crashed shortly after taking off, killing the pilot and leaving... 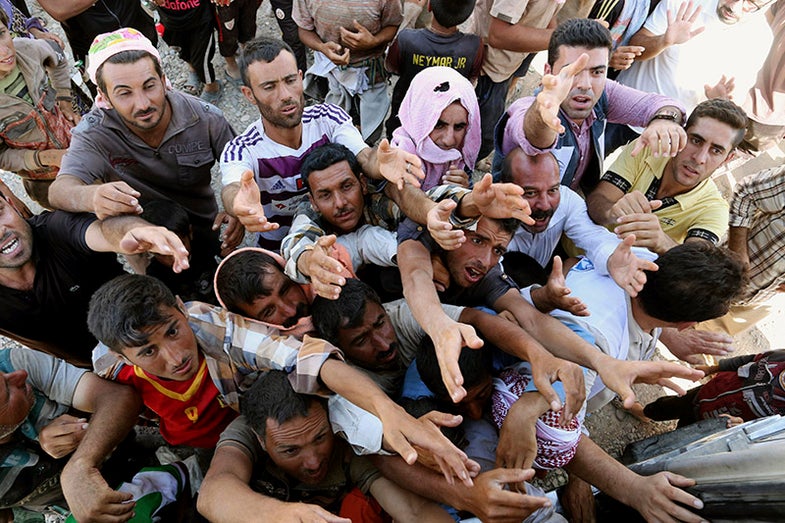 Displaced Iraqis from the Yazidi community gather for humanitarian aid at the Syria-Iraq border at Feeshkhabour border point, northern Iraq, Sunday, Aug. 10, 2014. Kurdish authorities at the border believe some 45,000 Yazidis passed the river crossing in the past week and thousands more are still stranded in the mountains. (AP Photo/ Khalid Mohammed). Khalid Mohammed
SHARE

A helicopter carrying aid to stranded Yazidi civilians in Iraq crashed shortly after taking off, killing the pilot and leaving several passengers, including three journalists, with injuries. Magnum photographer Moises Saman, on assignment for Time, and Adam Ferguson, a freelancer for the New York Times were both on board.

“If we had been another 50 meters higher we’d all be dead,” Ferguson told the Times yesterday after the crash.

Speaking to Time, Saman said he suffered a minor cut on his head. Ferguson reported a sore jaw and a few bumps. The New York Times Paris bureau chief, Alissa J. Rubin, who was also on board may have suffered a concussion, a broken wrist and a few broken ribs.

The cause of the crash is still unknown.