Taiyo Onorato and Nico Krebs may come from an art school background, but you don’t need an MFA to appreciate... 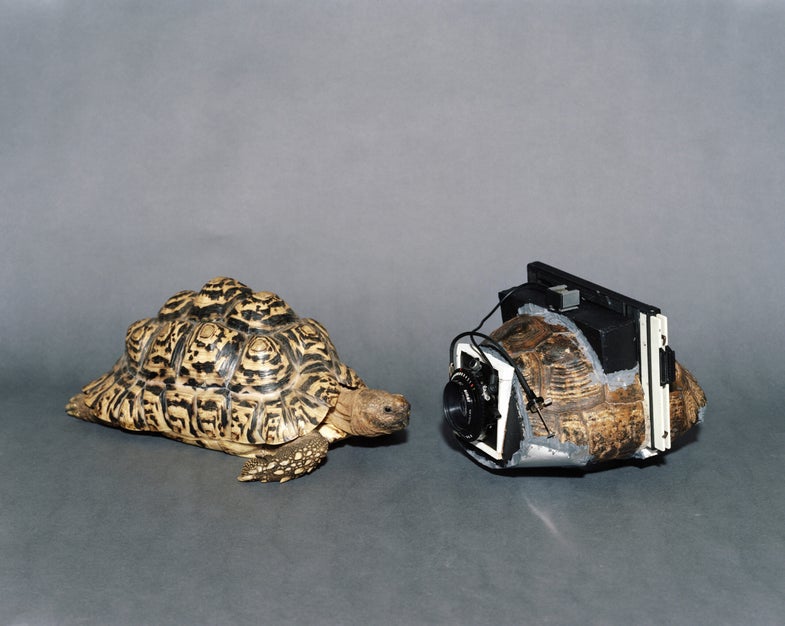 Taiyo Onorato and Nico Krebs may come from an art school background, but you don’t need an MFA to appreciate their work. It’s hard not to like their recent series documenting experiments in DIY camera manufacturing, using materials that are, well, unorthodox—unless you’ve previously seen cameras fashioned from turtle shells, rocks or unidentified stringed instruments. Still, there’s an irreverent sense of humor running through their work that will pique the interest of a more serious audience: one of the cameras is built from the hollowed-out insides of hallowed books on photography. They’re part of recent publication, As Long As It Photographs It Must Be A Camera, a two-volume set of camera hijinks together with a selection of their other work. The book recently scooped the most number of nominations for the 2012 International Photobook Award.

Their playful attitude was developed in school, as a reaction to the straight, documentary style that a certain professor favored—”a very German 1970s way of thinking about pictures,” as Krebs puts it. The title of an early series, “Moment of Truth,” is tongue-in-cheek: many of the photos are obviously faked, including one in which a robed warrior shakes a very ridiculous-looking sword at a dinosaur crawling up a skyscraper. A later series, “The Great Unreal,” is the result of a few road trips the pair took across the USA. It’s a bit less brash than “Moment of Truth,” but still mixes fact and fiction to a strange and pleasing effect. It’s an often-cited fact that, in Japanese, the word for “photograph” translates literally as “truth copy,” and I imagine that Onorato and Krebs would find this laughable.

The Berlin-based duo have been quite active recently, opening up shows in Europe, and Nico Krebs took some time to chat with us about working as a duo, meeting people through online forums, and French fry dreams.

I think these photos might appeal to a wider audience because they’re humorous. You must find them funny, too?

Yes, we’re having good fun. It’s hard to say where they come from. We’re curious, trying to experiment with different things. Often ideas or photographs seem funny at first sight, but if you think about them for a while they might also reveal a darker side. Humor often has a bitter taste hidden somewhere. This is where it gets interesting.

How did As Long As It Photographs It Must Be A Camera come about?

We were moving studios, in between projects, and wanted to publish something quickly, by ourselves. We found ourselves thinking about what a camera is, or what it needs to have. The expression of the camera “body” can be a starting point for an exploration. The whole thing took about 2 weeks. Some of the photos were things we’d done before—the Polaroids of the “camera man,” the mannequin, we’d done 7 years before and carried them around with us like mascots for something to come.

How about the instrument camera? What is that? 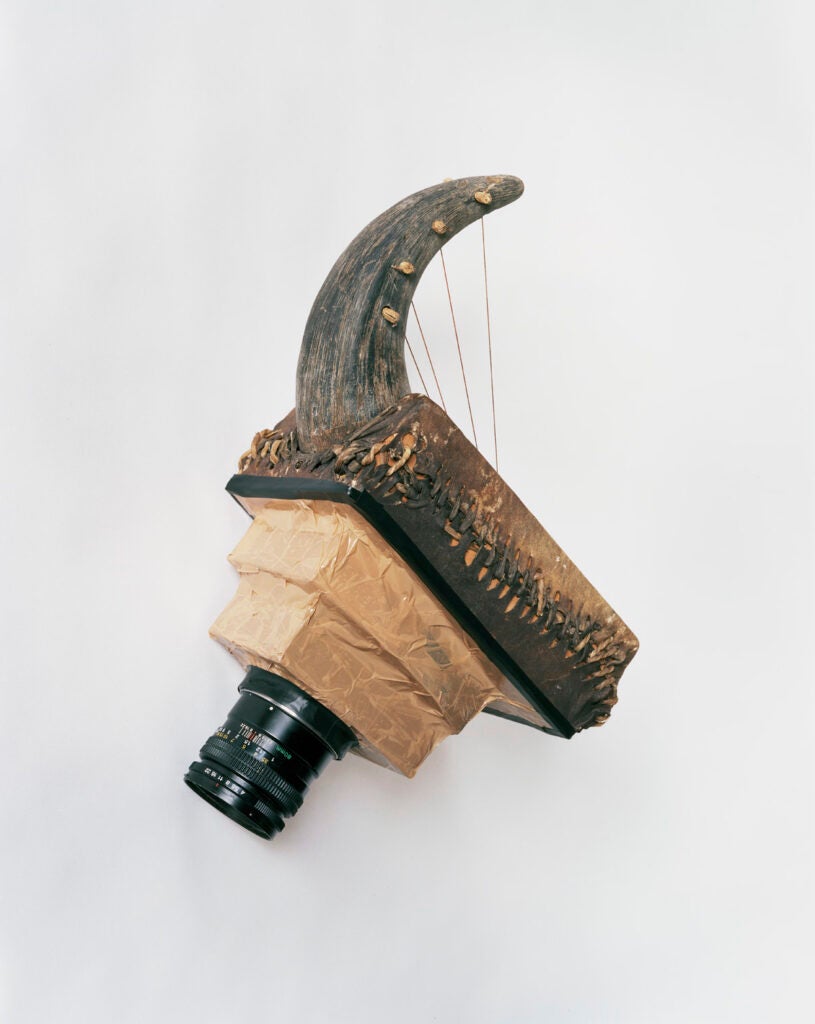 From “As Long As It Photographs It Must Be A Camera”

I don’t know! [laughs] It’s something I found at a flea market, it’s just one of those things that you can’t put away in a drawer somewhere. I have no idea how to play it or what purpose it had for the person who created it. It might as well be transformed into a camera.

On your eBay listing you said it was all tuned up, though! ****[screenshots of these eBay adventures are included in the book]**** For shame. How about that massive thing in your studio, which is up on rollers?

Oh, that was a totally functional camera, temporary though. There are photographs taken with that in the book. We used it to photograph direct-positives, which means that in the back is a piece of photographic paper, which we expose directly through the lens. It’s interesting, because you can dodge and burn the image as it’s being exposed, like in a darkroom. We produced photographs in the size of 60 x 85 cm with it. You actually sit in the camera for the whole exposure time—Taiyo says it must be every photographer’s dream. We processed the positive directly inside the camera, in rectangular flower trays.

Does the turtle camera work?

Yes, it would work, although we never took any pictures with it! Maybe we’ll do another edition of “If It Photographs,” and actually take more photos with the cameras. Unfortunately the book has sold out now, which is really a shame because we’d like more people to see it. But on the other hand you shouldn’t complain if something sells quickly. We didn’t expect it but are happy about it of course.

Are you thinking of doing a reprint then?

We’re not sure yet. Perhaps, but it might just make more sense to do the next volume.

You got quite a warm response from the people on message boards. 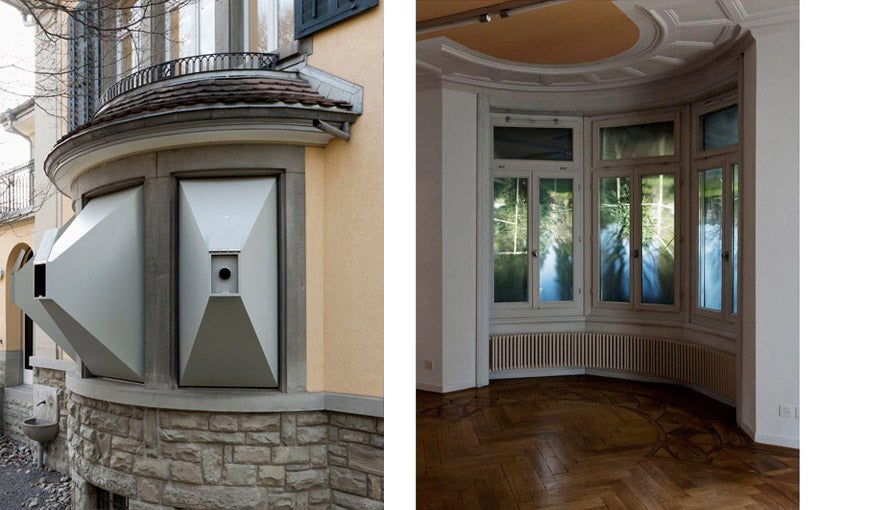 Yeah, it’s true. There’s a lot of guys in their 50s on those forums. We got quite a lot of technical knowledge from people like this. It was interesting to feel the generational gap. You’d hear back from them, and they would tell you about their experiences as a young person, about their sicknesses now—and then they’d tell you the technical information you wanted to know. We had a lot of really nice interactions with people like this. It started over a year ago, when we wanted to transform windows of a museum into ground glass of giant cameras pointing outwards. It was very useful to find these analog die-hards who know all about ultra large formats, image circles and how to calculate the dimensions of optical Instruments.

What was your experience of art school like? I can feel the seriousness of your work, but at the same time, you’ve done some things that are pretty funny—I’m thinking of the dinosaur crawling up the wall in your project “Moment of Truth,” a title that’s obviously tongue in cheek.

At school, we had this professor, who came from a more hardcore approach to photography, a very German 1970s way of thinking about pictures. He was of the opinion that, in order to take good photographs, you had to have an interesting life, or hang out in some kind of interesting scene. Many people were struggling with this, because they felt their lives were too boring to become a good photographer. Taiyo and I wanted to change this by just using the imagination as the base of photography. “Moment of Truth” appeared while we were putting together our first book. It was the title of a George W. Bush speech, when it became clear that America would go to war for obviously fictional reasons. The interesting thing about photography is that people still accept things as real, even though everyone knows about manipulation and Photoshop. You have to constantly be aware, and remind yourself that the model in an ad campaign won’t actually look that way when you run into her on the street!

I guess you played with that in “The Great Unreal,” with the photo of the French fries over the Grand Canyon. 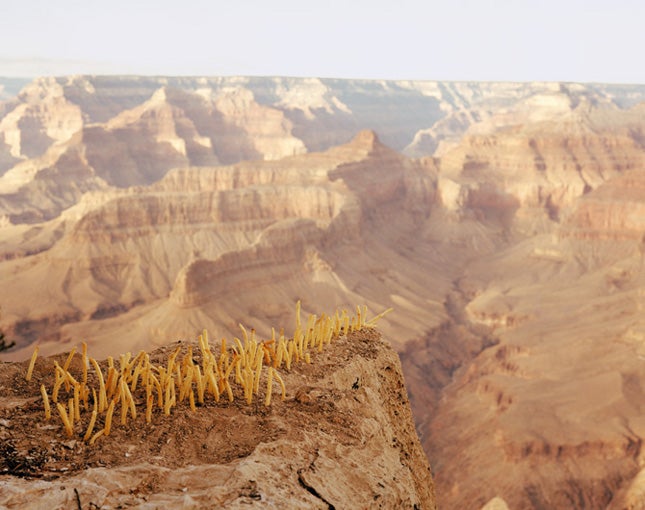 From “The Great Unreal”

Sometimes the ideas for photos come to us in strange ways. The French fries, yes, there are all sorts of ways you can read that. Some people think they’re like tourists, explorers, developers. I might get an image in a dream, or anywhere—not that I’m saying I dreamed of French fries! But one of the challenges of working with photography is trying to take the image you have in your head and then creating it, especially without copying and pasting pixels.

What’s it like photographing as part of a duo? There’s the Bechers, of course, but there aren’t too many photo-pairs out there.

It’s really hard to say. It’s not like I do the concept and Taiyo does the shooting, or anything like that. We don’t have a defined approach for making work. If anything it’s more like a dialog between us.