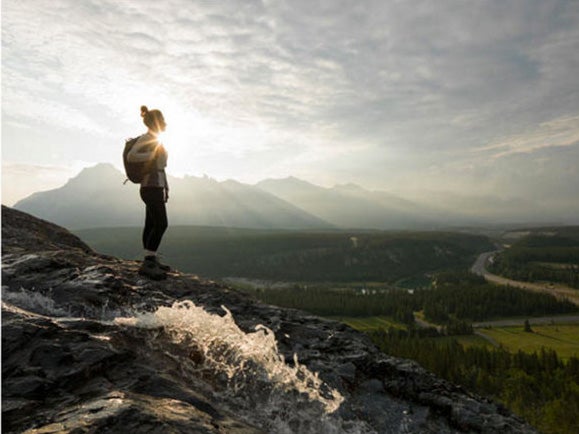 Pam Grossman, the director of visual trends at Getty and head of Getty’s North American Creative Research team, is responsible for identifying and predicting public, widespread trends in imagery. One major trend she has been monitoring: the representation of women in stock photography.

“In 2007, the top image of a woman was a stereotypical objectified woman, looking passive while naked and tangled in sheets,” she explained in an interview with the Observer. “In 2012, it’s actually a woman on a train. She’s attractive but in a relatable way. She’s wearing clothes, and that’s thrilling!”

This shift, both drastic and rapid, is pushed forward both by the creators and the consumers of photography. Art, and the practice of photography in particular, mimics and reflects the current state of our world. In a world where women are now pushing back against patriarchal norms, and have the means to do so, there is a need for images that reflect a woman’s new stance in society.

Women, much like Grossman herself, are achieving positions like “director” or “CEO” that in another time were strictly held for men. Thus it is important that we have images readily available that echo that evolution, and that our stock photography does not stay stagnant long enough to render itself irrelevant.

“I theorize that happened right when social became more widely adopted, because for the first time in history, we had more females than males dominating the conversation,” Grossman says of the shifting female imagery. “Women use social media more, so that’s my main guess for why there was such a quick change. I also think it’s the fact that women overall are becoming more upwardly mobile and vocal and now have a platform to express frustration when commercials and such don’t speak to them. I think that’s a big piece of it.”

This need for modern, accurate photographic portrayals of women in turn catapulted the creation of the Getty project Female Rising, which identifies the demand for photos of strong women and girls.

The Female Rising trend was used to spearhead the Getty Lean In collection, now two years old, which was created in partnership with Sheryl Sandberg’s nonprofit LeanIn.Org. The Lean In organization is meant to empower and support women and girls, and Getty’s Lean In image collection does just that through the curation of positive, strong, female images.

Because of the way we are constantly bombarded by huge amounts of visual media, whether online, on TV, in a magazine, or on a billboard, it is vital that the imagery consumed by women, and young women in particular, is motivating and positive. It is imperative that images show that women are capable of contributing to society in a meaningful way, and not only through their physicality.

“I’m also excited there are a lot of images celebrating what women can do and not just what they look like… I think it’s important to celebrate what they can do and what they leave on the world,” says Grossman.