A Strange Trip Down the Mexican Coast

It’s fair to say that the road trip is one of the strongest motifs of American photography. You don’t have... 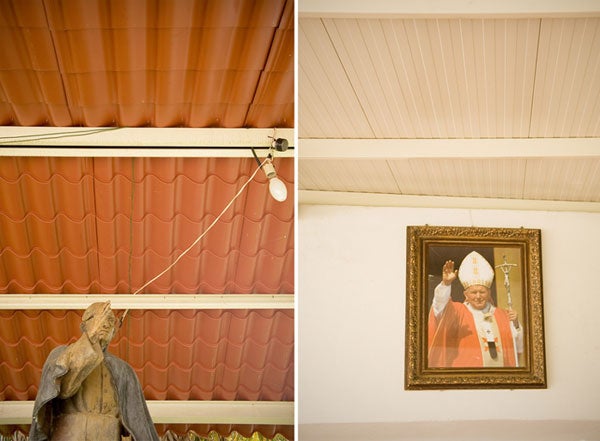 It’s fair to say that the road trip is one of the strongest motifs of American photography. You don’t have to look much further than the Golden Age of American photography, the 1960s, to see its obvious presence, led by Robert Frank’s The Americans, the product of a cross-country road trip. Lee Friedlander also took a number of pictures on the road, and one of his recent works is even a series of photos taken from the windows of rental cars. In the 1980s, Stephen Shore picked up the baton, and more recetly Alec Soth produced a book that was based on a trip down the Mississippi River.

So we’ve seen the Great American road trip. But what about the country just south of the border? With her work “Carretera Nacional,” or “National Highway,” Melba Arellano has created a subtle work of road trip photography which deserves a careful look—there’s a lot going on here. In most of the American examples, the road trip is just the structure for presenting some other idea, but Arellano takes the journey itself as the subject of her project. These photographs were all taken along one particular road, the Acapulco-Zihuatanejo Highway, which holds particular significance for Arellano: she often traveled it herself as a child. She says, “I returned to those places where, as a child, I was not allowed to go, but which awakened in me a great attraction.”

Her photographs are anything but a straightforward picture of the villages along the highway, or a literal re-interpretation of what she saw as a child. Instead, her photographs are almost lyrical in the way that they pair images of surfaces with some quite frankly haunting portraits. There is also a preoccupation with re-photographed family portraits. They’re photographed in much the same way as Arellano’s actual subjects, which adds to this eerie mood, as if the distance between the real people she’s photographed and the re-photographed portraits was not so great at all. Still, Arellano’s portraits are probably the strongest part of the work, and she was kind enough to explain the story behind some of them. (Her responses below are translated from Spanish.) 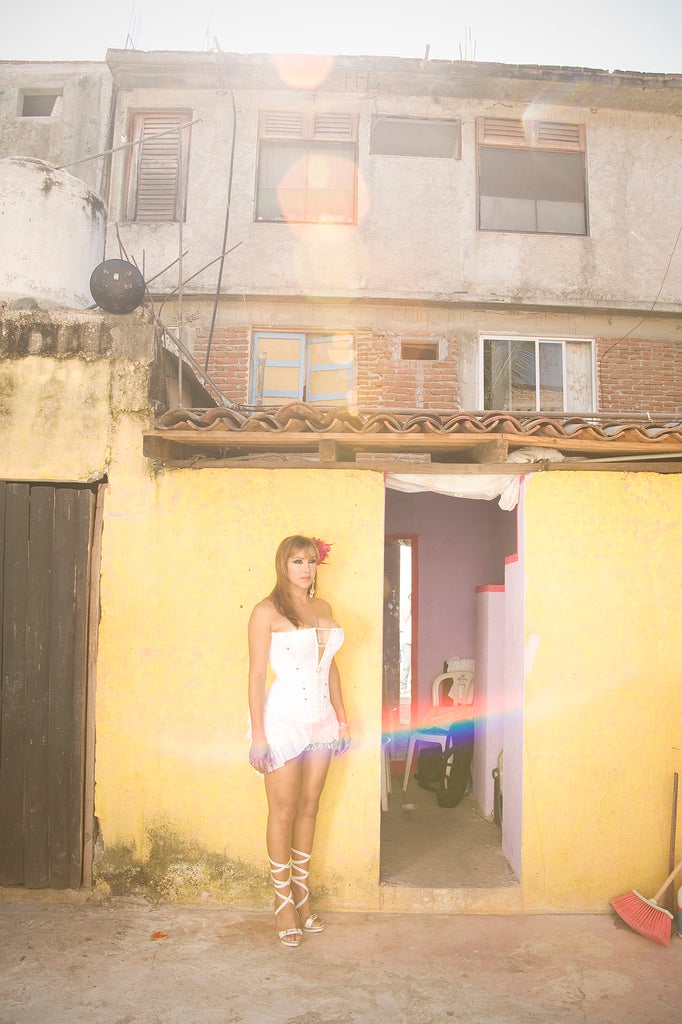 “Tania (the woman in a white dress in front of a house) is transsexual, she works in a restaurant performing a show in which she imitates Lady Gaga and another Mexican starlet; she has actually had a few different plastic surgeries to look more like this starlet. While I was driving on the highway I heard on the radio that the double of this starlet would be at the restaurant, it sounded interesting to me and I went to find her. I told her that I was doing a photographic project, that I had lived in the region in my childhood and that I’d be interested in photographing her. She said sure, but asked that I also photograph her for a calendar. I came the next day, took her photo and then we went to an island to photograph her for the calendar.” 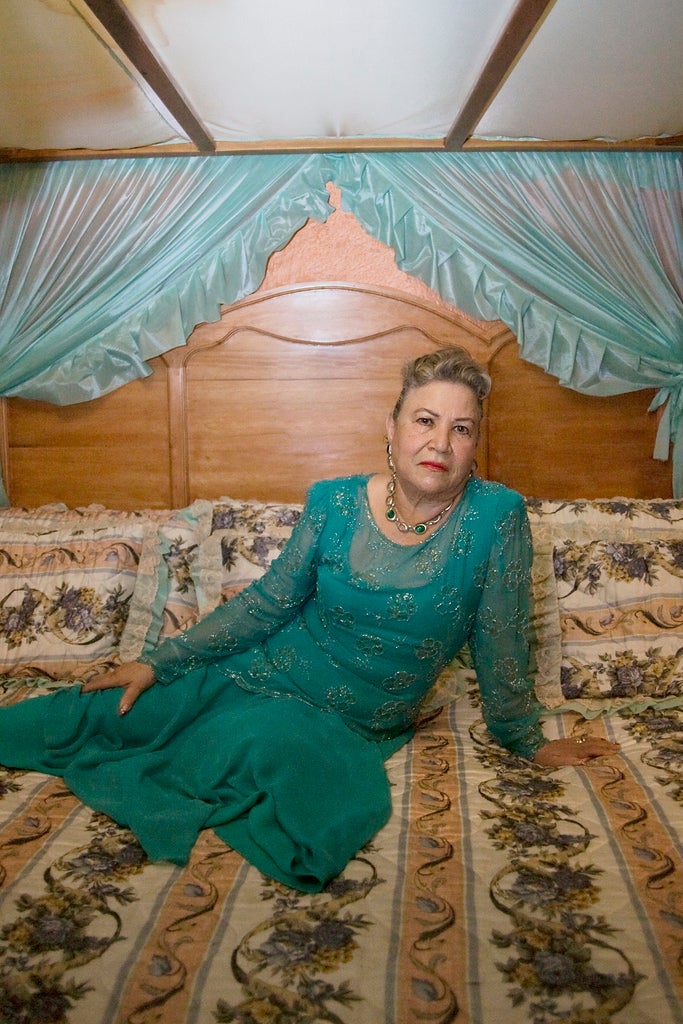 “Elvia (the woman dressed in green on the bed): I met her when I was a child, when I went with my mother to her birthday party—she was the boss of a hotel. Her parties were very memorable, she would have 10 wardrobe changes, and she would sing and dance with a group of ballerinas. These images stayed in my head forever. I was also interested by the stories that people would tell about her: that she had killed her husband to inherit his fortune, that she had 1000 vestidos, jewels and enormous hats—when I was young I imagined stories about her life quite a few times. Now I went back to find her and I explained my project to her, and that I had known her as a girl. She gave me permission to photograph her. She lives alone in the hotel, the only one in the town. I didn’t ask her about these stories—I thought it would make her uncomfortable. My experience with Elvia was strange, I couldn’t have much of a connection with her given that she spent the whole time watching her soap operas and not talking very much.” 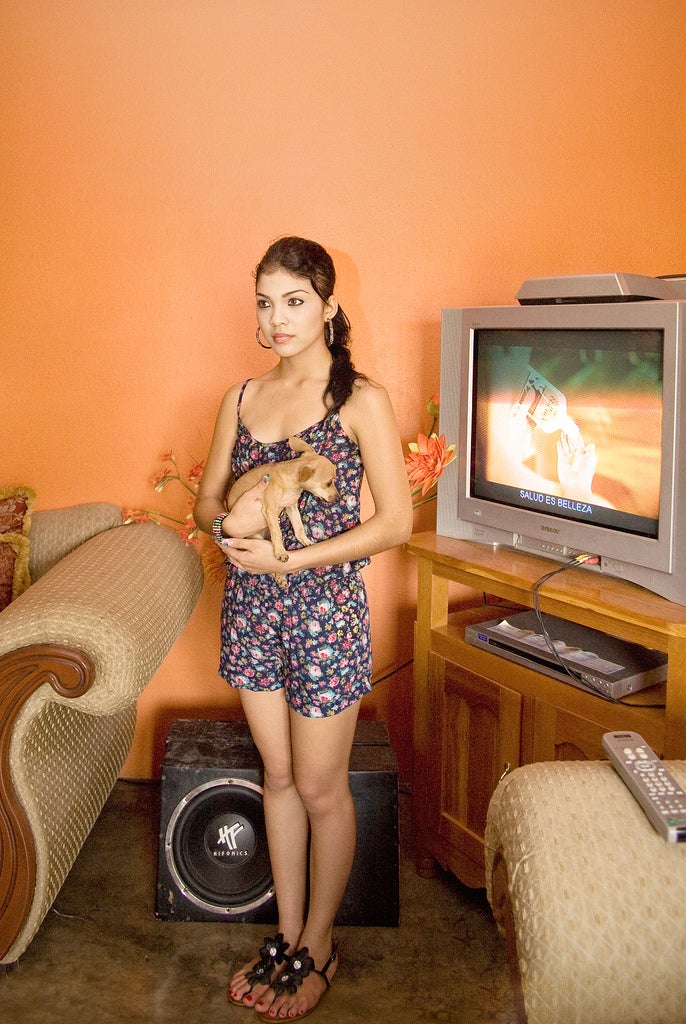 “Paloma (the woman with a dog in front of the TV): I saw her in the town fair, she was the queen. She drew my attention and I went up to her and her mom to explain my project to them—she’s under-age. I photographed her in her house. She wants to be a model.” 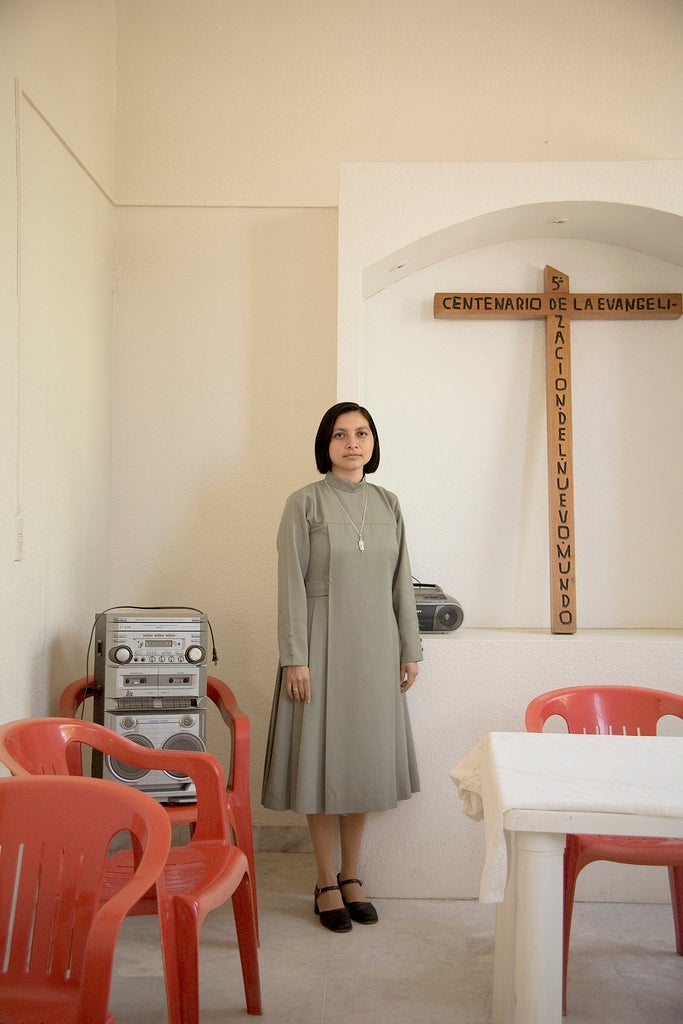 “Shanik (the monk): I went to a Catholic high school, and I went back to the church next to the high school where the monks who were also teachers lived. Photographing the area from a window, I saw Shanik. She was drying the vestment of the Saint of the church. I knocked on the door and told her that I was photographing the area and that she’d caught my attention. She told me about her work—she cleans the image of the saint, fixes it up, she spends the majority of her time in the place that I photographed her.” 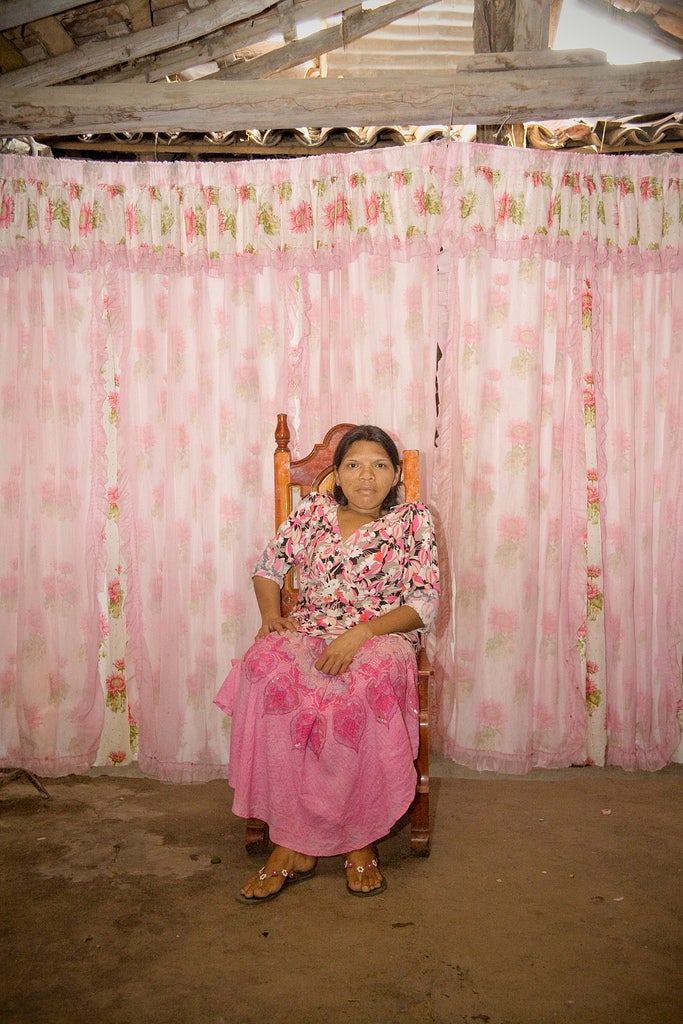 “Estela (the woman in the chair): I found her while she was walking in the street. She has a physical deformity (a hump), and she doesn’t speak and has toruble hearing. She was with a friend, and I loved her personality, she was dancing and seemed very coquettish. I went up to her and asked to take her photo, and her friend helped me out to translate my request to her in signs. It took some effort to convince her, but I met her the next day in her house. While I photographed her she told me her story. It was difficult to understand without her friend but she told me that she’d had a son but that her sister took him from her, that she worked cleaning a house, that she had traveled by herself to the USA, that she’d been the groupie of a tropical music band and had traveled with them, and many, many more things.”

Arellano adds: “That’s the general story of these women, I have been very fortunate to know them.” I asked her if she thought the project was finished, and she said: “certain signs were telling me that it was time to stop.” Mysterious indeed. Arellano currently lives in Mexico City, and is hoping to publish “National Highway” as a book.