_Of the hundreds of photos that went viral as hurricane Sandy struck the east coast, Nick Cope‘s was one of... 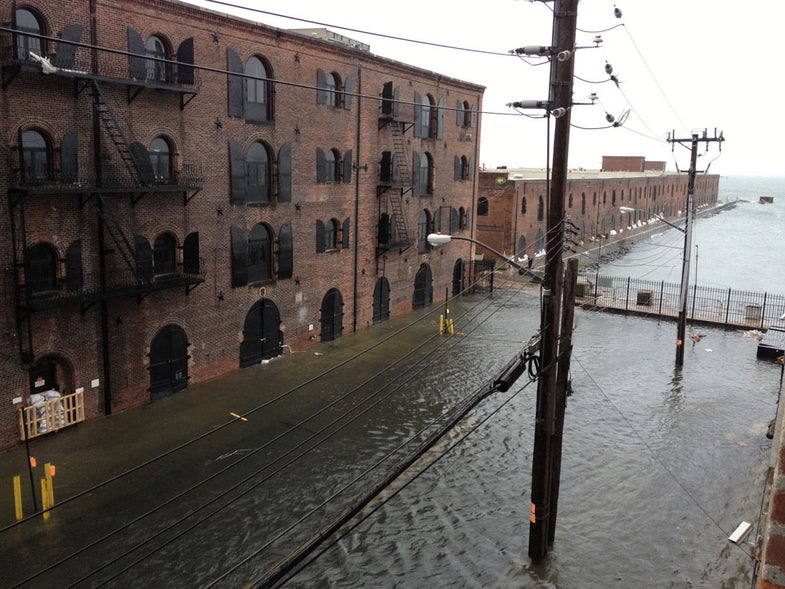 _Of the hundreds of photos that went viral as hurricane Sandy struck the east coast, Nick Cope‘s was one of the first. On Monday morning, he looked out the window of his loft in Red Hook, a Brooklyn waterfront neighborhood that sits in the mouth of New York Harbor, and took a photo of the flood waters that had already risen in the streets. He posted it to Facebook and Twitter, and continued on with his day, making preparations for the coming storm. After a strong initial response from his 1,345 Facebook friends, the photo was noticed by a local TV producer. Soon enough, Cope had editors from some of the world’s largest media outlets on the phone, wanting to use his photo. _

We spoke with Nick, who runs an interior design and build business and is an editor at large for the art and fashion magazine The Wild, for the full backstory.

Tell me about the moment you took the photo.
It was at about 8:00 in the morning on Monday, so the storm was still many miles away. Red Hook was basically built on a marsh, and it’s right near a storm drain. So it’s typical for us to get flooding, but when I looked out the window that morning I realized there was far more water than usual. It was at the level that we would see after a major storm, and the storm hadn’t even arrived. So I figured we were definitely in for something.

We’re on the third floor, so we had an amazing vantage point. I’d say the water levels at high tide on Monday eventually reached somewhere beyond eight feet, it looked more like nine or 10 feet, if the view of the buildings across the street was any indication. And it was raging like a river. It was pretty frightening.

So yeah, I used my iPhone. The way our windows are constructed it’s hard to get an SLR out the window, so I just kind of reached my arm out the window and held my hand steady and took a couple photos.

And you immediately posted them to the web?
Yeah I posted it to Facebook, and I tweeted it—I actually tweeted it at Soledad O’Brien on CNN because I was watching CNN in the morning. And very quickly my friends on Facebook started liking the image to a surprising level in the first 30 or 45 minutes—it immediately got tons of likes, and a few shares and comments. 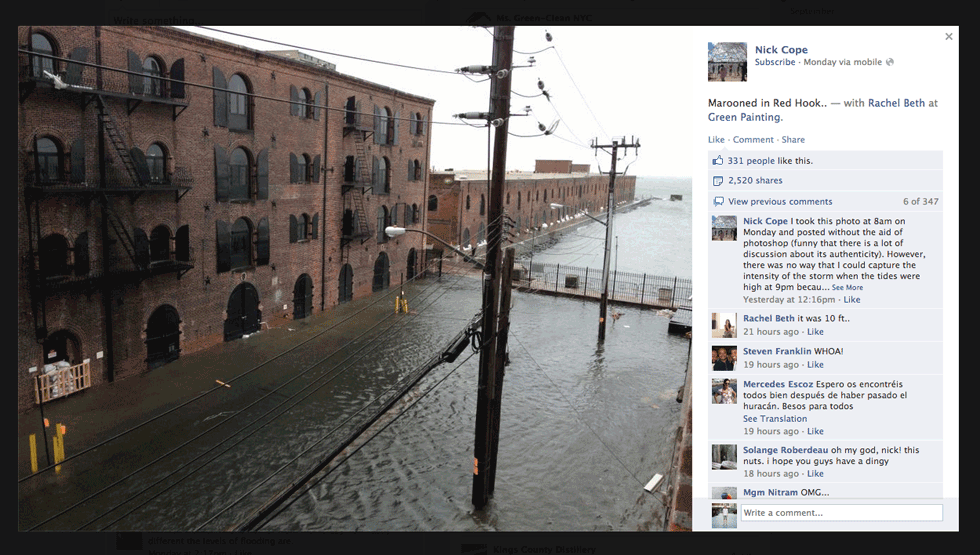 But I just went about my day as usual. I went to the cafe down the street, and about an hour later I realized that I’d had a really surprising amount of traction on that image. Then someone called me from a news agency [Cope’s phone number is on his personal website]. I think it was a local New York TV station at that point, New York One or CBS New York [who’d seen it on Facebook]. And then I started getting several emails from various other news agencies. And then about two or three hours after the image was posted, I got a call from a producer at Diane Sawyer’s show at ABC, and at that point I went back home and checked the computer and I realized it had like 1,000 shares on Facebook. I basically just released the image without any sort of reservations to anyone who wanted it. And then it spread really rapidly at that point.

What started it on its viral rise? It got a lot of retweets, (from the Huffington Post, the New York Post, Sam Sifton, National Editor at the New York Times and fellow Red Hook resident, etc.) Were you able to see it ebb and flow as any prominent people were finding it and passing it along?
It was hard to track—I was also preparing for a hurricane at the time! And for a good part of the morning I was at a cafe in the neighborhood, chatting with the owner who was mixing up Bloody Marys, and so it was a combination of hanging out with folks in the neighborhood and getting prepared for the storm. And then I start getting all these calls. 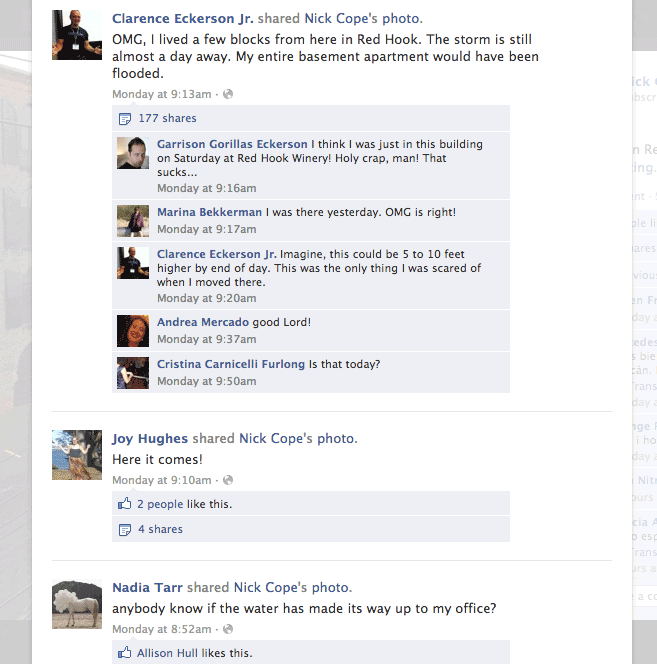 I could sense that things would slow down a bit, and then someone would say “Hey, you were just on CNN,” and then I would get another several hundred shares. But I must say it was a little hard to track where it started. It was certainly a lot of friends at first [sharing the image on Facebook]. I could sense also when people were saying “Hey, this thing is popular in a certain place” and then I’d get messages in French and Spanish and some languages I didn’t even recognize, on the comments on my Facebook page.

It ended up on the New York Times’s site, and it went on the air on CNN multiple times. And then CNN International contacted me, the BBC, CBS, New York One. I got a call from what I think was Canada’s version of NPR, the CBC. What else? The Atlantic posted it, Gizmodo, I think Wired maybe, the Huffington Post…

How many organizations contacted you for permission to use your photo?
I don’t even know—directly? Probably like 12? At a certain point I started to lose track.

And those were mostly the bigger local and national TV stations?
Yeah, those people were asking for my permission, and wanting me to agree to some sort of email form of licensing. But, everywhere else, I think just like on Tumblrs and blogs and stuff, people just use it. You’re told not to do it I guess, but shit, that’s what I do too sometimes if I need to. I’m not surprised that a lot of people used the image, but it was only the big news agencies that contacted me for permission. Along with a few smaller blogs asking me on Twitter.

It’s interesting that it was mostly TV stations who asked.
Yeah, it is. I’m not sure if it’s just a more litigious world because they’re airing the image on television, versus something that’s on the web that could be pulled off a site really rapidly if someone wanted to push an issue.

Were you surprised that more people didn’t ask you for permission?
I guess yes and no. I suppose the way the news cycle moves so quickly today, I think there’s a race to get content out as quickly as possible. Anyone can be a content creator—I took an iPhone photo literally in my bathrobe, and within a couple of hours, it had been viewed thousands, hundreds of thousands of times. I guess there’s such a scramble to get stuff out that I’m not so surprised. And the internet can be so impermanent—what’s the worse that could happen? Like if I really pressed a suit, or sued for damages or invoiced for compensation, the image could be taken down in literally seconds, so, you know, it’s kind of par for the course.

Maybe the most bizarre and amusing part of the whole thing was that I did get contacted from various news agencies that wanted [eyewitness accounts]. I was interviewed multiple times throughout the day—people would call who were working on stories and would ask, “What do you see? What is it like now?” It was just so interesting to me—I’m just a person who has an iPhone who took one photo, and then all of a sudden I’m this credible person who’s being called by the BBC and CNN to ask for on-the-ground information on national cable television.

I’m assuming you didn’t get paid by anyone.
No.

Did that ever cross your mind?
You know, it did. I ran into a friend who’s a photographer, and she does a lot of assignments for Getty images, shooting events, and the like. She and a few others said, early on, “Hey, you should get paid for usage.” I mean, that probably would have been nice. I just really didn’t know how to go about negotiating it. I didn’t really expect that I would be able to figure that out in such a short period of time. Also, if I started asking for money, I thought it might put the brakes on the circulation of the photo, and I thought that was fun. So I didn’t want to jeopardize that.

Have you had any other personal responses as a result of the photo’s popularity?
I had a really meager Twitter following, and it’s increased around fourfold, I think, since I posted the image. I also have had about as much traffic to my website (green-painting.com) in the last day or so as I’d get in any given month. So that’s good–I don’t know how that will help, but I think that’s something.

It’s funny, I’m getting a lot of people commenting on things about me that are completely unrelated to this photograph [via email and on Facebook]. I operate a business that does interior design and renovations, and so a lot of people who saw the photo would assume, simply because it’s been viewed so many times, that I must be generally skillful or something. I don’t even know how to describe it! To me it’s unrelated, but, I’ve been contacted by a lot of people commenting on my work separate from the photo. I have many, many messages from people about interior work.

Any leads on new business?
I have no idea! I’m preparing to launch a company that I’ve been working on for almost two years in the next month, and I really wish in hindsight that I’d launched my larger web site in the last two weeks. 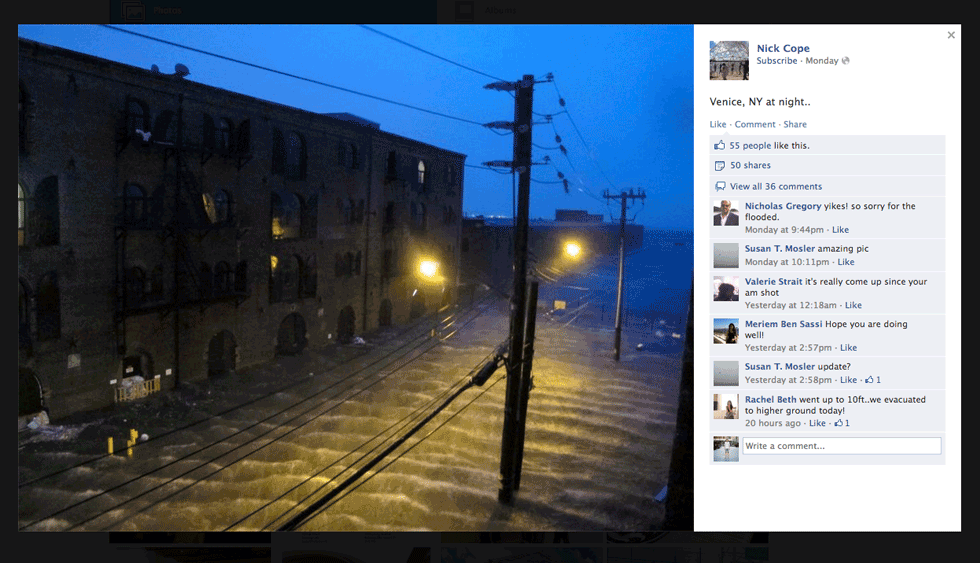 The same view later that evening

So how’s everything looking down in Red Hook? How is the damage?
There’s really no damage sustained [to our apartment], which is up about 30 feet. But the lobby was trashed. The elevators are messed up, and the doors blew in in the front. So the building was certainly damaged. We lost power at around 8:30 pm [Monday] right as the storm was hitting its peak. I left Tuesday night to head into the city to stay with my fiancee’s parents on the Upper East Side, and I was just stopping in today to pick up some things and feed the cat, and the power came on. So we may have power this evening.

Did you have any conception that it would take off like this when you posted it?
No, definitely not.