Examining Gender, Conflict and Identity in the Middle East from a Female Perspective 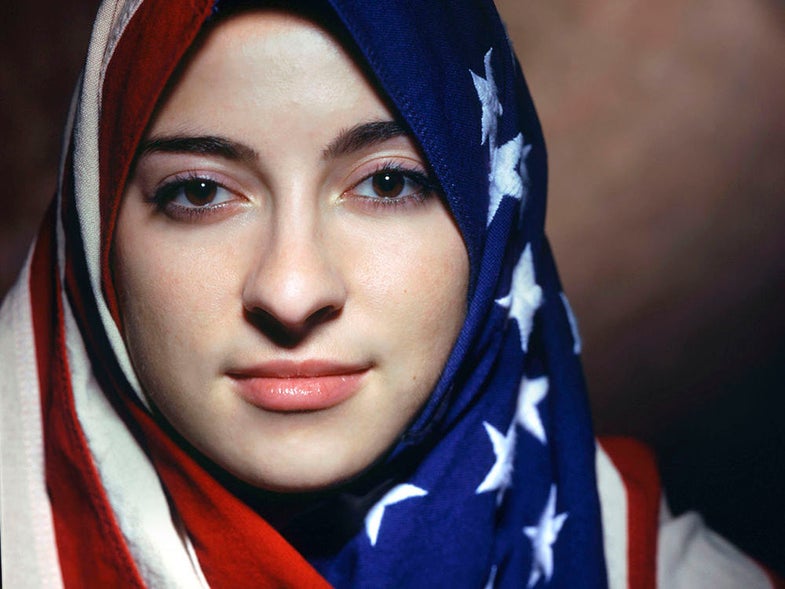 When Kristen Gresh, the Estrellita and Yousuf Karsh Curator of Photographs at Boston’s Museum of Fine Arts, began exploring the contemporary photography being produced from the Middle East and North Africa, she noticed that many of the most powerful images had something in common: they were made by a woman.

This handpicked group of twelve photographers was molded into She Who Tells a Story: Women Photographers from Iran and the Arab World, an exhibition that explores gender and aims to reshape public opinion regarding female identity in the region. The show, which was originally on view at Boston’s MFA, opens at the National Museum of Women in the Arts (NMWA) on April 8 and will remain on view through July 31, 2016.

The exhibition’s title comes from the Arabic word rawiya, meaning “she who tells a story,” and is also the moniker of a separate female photography group based in the Middle East. The word itself embodies the core theme of the exhibit: this is a woman’s chance to tell her individual story through her art.

Addressing the work being created by women in the Arab world has become pivotal as the stereotype of the suppressed and silenced Middle Eastern woman has grown increasingly hollow. Traditionally patriarchal societies have often focused on censorship and the silencing of the female voice; this exhibit aims to do just the opposite. The show quiets the Western impersonation of the Arab culture long enough to give twelve women a chance to visualize their authentic truths.

“It shows a mosaic of communities, perspectives and cultures—everything from personal to political identities,” Gresh says.

Lalla Essaydi’s triptych image, Bullets Revisited #3, illustrates—from afar— what appears to be a woman adorned in beautiful cloth and decorative gold beading. Upon closer inspection, the viewer can see that it is not finely-embroidered cloth at all, but rather restrictive lettering covering this woman’s body. And the beads are not gold and gems, but bullets. This work, like many of the others, is Essaydi’s commentary on the restrictions forced on women in an evolving Middle Eastern world.

Focusing on the universality of womanhood, Rania Matar’s images from her series A Girl and Her Room shows the parallels between young women from different geographical regions. For the series, the photographer photographed these women in their bedrooms, private spaces that are removed from whatever politics or conflict inhabit the outside world. The visual unity of the images allow viewers to see the similarities that these women share.

Newsha Tavakolian explores the forbidden through her series Listen, which features female Iranian singers. Because they are women, these singers are forbidden by Islamic tenets to perform alone in public, and as a result their careers are harshly compromised. Tavakolian had each woman sing in her private studio, standing in front of vibrantly colored sequined backdrops, and captured their expressions in the midst of performing. The beauty found in this politically forbidden act questions the statutes of her society rather than quietly accepting them.

What makes the exhibit so profoundly powerful is the strength that comes from numbers. Twelve different photographers are telling individual narratives about their culture, but the resulting chorus is an extremely moving one—as a group the work pushes back against the stereotypes and sweeping judgments often cast on women of Middle Eastern heritage.

The exhibition seems particularly salient in light of national current events. “If anything, it is becoming more and more important to step back from media and politics,” Gresh says, adding the importance of acknowledging that beautiful and powerful work can be created even in regions of intense conflict.