Ryan McGinley, an Animal, and YOU

As we’ve noted before, Ryan McGinley is among he most influential photographers working today. His star is burning bright, so... 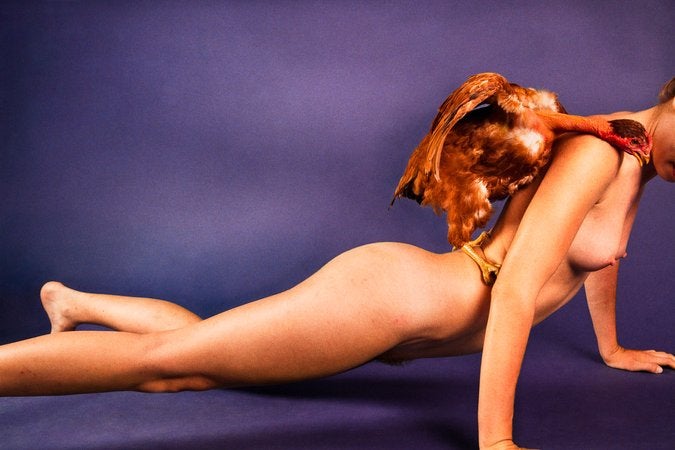 As we’ve noted before, Ryan McGinley is among he most influential photographers working today. His star is burning bright, so bring that if you’re in Tokyo this coming weekend, you could pay for the privilege of having him snap your photograph on his iPhone.

Over the past few months, McGinley has been releasing a few new works, including “Animals,” which shows his trademark young nude models posing together with other, non-human creatures. This series, shown at New York’s Team Gallery earlier this summer, forms the basis for the Tokyo event: for about $75, you pose together with a beast of your choice–the website of the event (Japanese only) currently indicates that a baby goat, monkey, sheep, pig, rabbit, parrot and snake will be at your disposal. Less inhibited guests are free to pose nude, in a private audience with the photographer. You’ll walk away with an 8 x 10 inkjet print of your McGinley moment. Whether you choose to have a marmoset attach itself to your groin is, apparently, up to you!

I’m a little conflicted about this. On the one hand, it seems extravagant to pay 6000 Japanese yen (about $75 with the current exchange rate) for a print from an iPhone photo. Or at least that’s my gut reaction; I know that the quality of the iPhone camera is actually quite good, but somehow it seems like an odd fit for McGinley’s well-crafted studio work. But the event organizers said it was his choice.

And on the other hand, $75 is a bargain considering the collectability of McGinley’s gallery output. Not to mention the uniquely personal aspect at play here. You have to admit, it’s a pretty fun concept.

“McGinley’s Zoo” is being held to celebrate the launch of a new photography magazine in Japan called “IMA,” which means “now” in Japanese. I’ve seen a preview issue of the magazine, and it looks very much like the Netherlands’ venerated “FOAM”–high printing quality and a good selection of photographs.

On the off chance any American Photo readers sit for McGinley in Tokyo, please share the results!