Quiet Moments in the Flood

For six months last summer, an unprecedented series of floods swept over Thailand, hitting several major cities including the capital,... 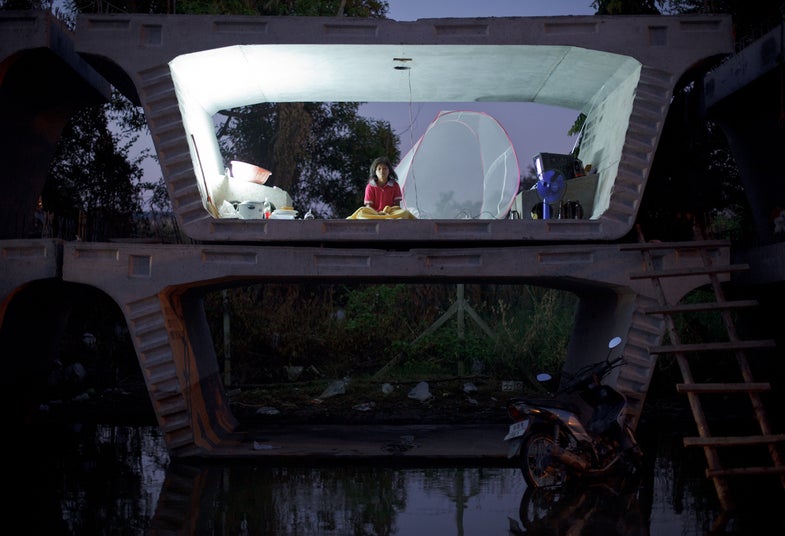 For six months last summer, an unprecedented series of floods swept over Thailand, hitting several major cities including the capital, Bangkok. As photojournalists rushed to cover the chaos of a city of 12 million people suddenly finding itself underwater, Bangkok-based Miti Ruangkritya set out to photograph the floods without trying to capture anything “spectacular” or “amazing” about their effect on his city. In a statement for his project, “Imagining Flood,” Ruangkritya writes that “It is the sense of waiting and fear that first drew me to the project…conjuring a mental image of the event cannot avoided, which influenced my approach to shooting these scenes—as if developed from the subconscious, contrasting to urgent and frenetic style that has been depicted in the media.”

This approach led to photographs which could be described as quiet, though definitely not in a calming sense. Ruangkritya’s photographs, almost always taken during the dead of night, show the city at a complete stop, with only the eerie reflections of a few scattered lights preventing the shot from being completely dark. This isn’t a work of daredevil photography, in which we can feel that the photographer is in some imminent danger. Instead it’s a subtle look at the situation, which transmits something of the feeling of what it was like to be there at that time.

In the process of shooting “Imagining Flood,” Ruangkritya came across a series of temporary dwellings which had been built for displaced residents out of massive slabs of poured concrete. The photographs of these units became a second project, “Space Shift.” Ruangkritya says that when he first arrived at the location, he was “immediately struck by how the futuristic the setting appeared.” Indeed, the buildings look like something out of a sci-fi movie, although many the residents he photographed had settled in comfortably. Between these two projects, Ruangkritya has offered a perspective on the floods that other media would most likely never represent.