The Poverty Line, Visualized Through Food

Stefen Chow’s series “The Poverty Line” examines the standard of living in countries around the world, through a deceptively simple … Continued 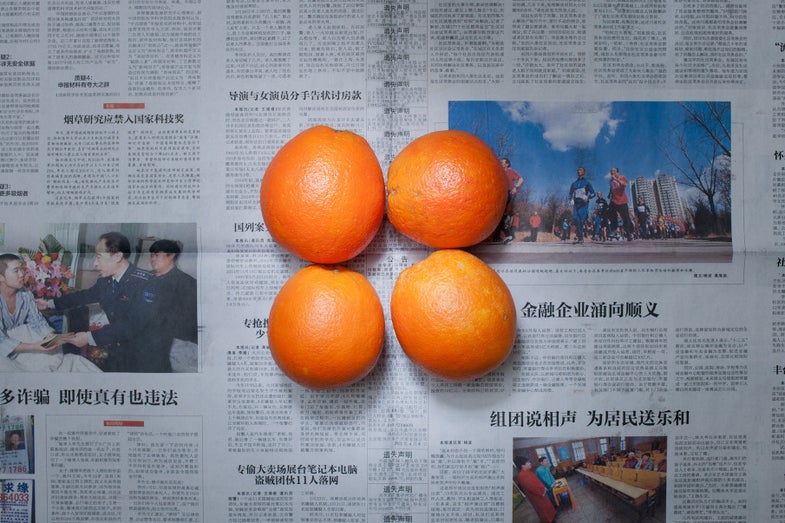 Stefen Chow’s series “The Poverty Line” examines the standard of living in countries around the world, through a deceptively simple technique: he photographs an amount of food equal to the daily income of someone living on the poverty line of that country. The goal of the project, as Chow explains on his website, is to explore “a simple question: What does it mean to be poor?” Stressing that the project is “not an emotional statement,” he works together with economist Lin Hui-Yi to make statistical calculations about each country before traveling there. (He explained further in a recent talk.) Chow has already photographed in 16 countries around the world, including China, Brazil and France.

Chow did the project twice in China, once in 2010, and again in 2012. We’re showing photographs from these two separate occasions, and more can be seen on The Poverty Line’s website.

I’m most interested in the decision to shoot the food on a local newspaper. There are certainly some practical reasons for doing this. At the most basic level, a newspaper is a cheap object which can be acquired pretty much around the world, so it makes the task of setting up a remote “studio” a snap. It also means that the photograph will give the viewer a clear hint about where it was taken, in that the language of the text could be identified. Still, beyond these two reasons, using a newspaper creates a highly meaningful context for these objects. Just as the newspaper prints news reports and advertisements, this background places the food directly within the flow of information and money, two essential components of what Chow is talking about in the project. There’s also the intriguing possibility that, by including a raw form of information in the photographs themselves, Chow may unwittingly capture data that’s relevant to the economic aspect of his project. At the very least, there are some interesting juxtapositions between the food and its background.

Chow’s work has been picked up by some major sources already, including NPR, so it’s no longer becoming a question of whether people will see these photographs, but what effect they might have.

[via Photography of China]