Photojournalism of the Week: September 7, 2012 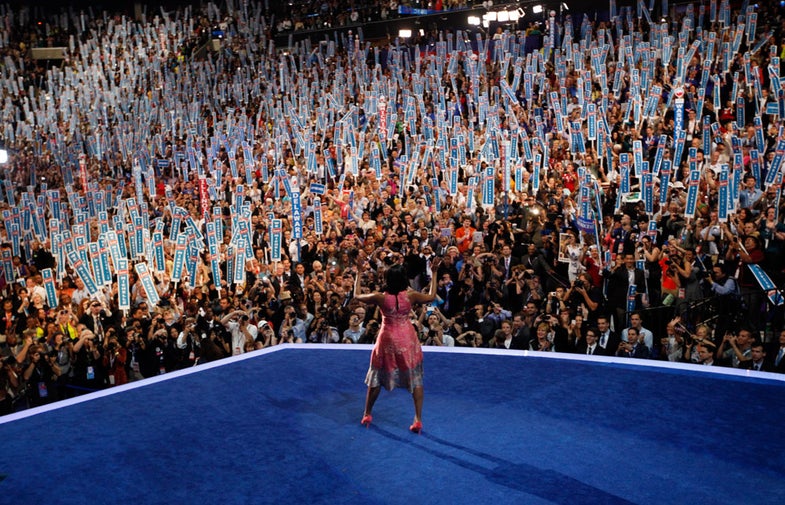 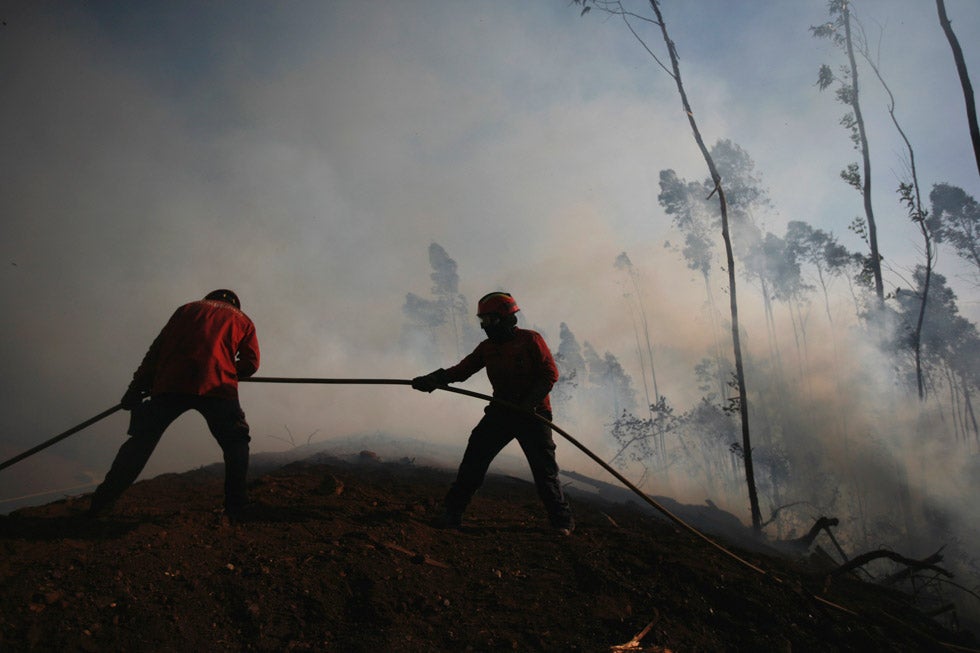 Firefighters attempt to extinguish a fire burning in Alvaiazere, near Ourem 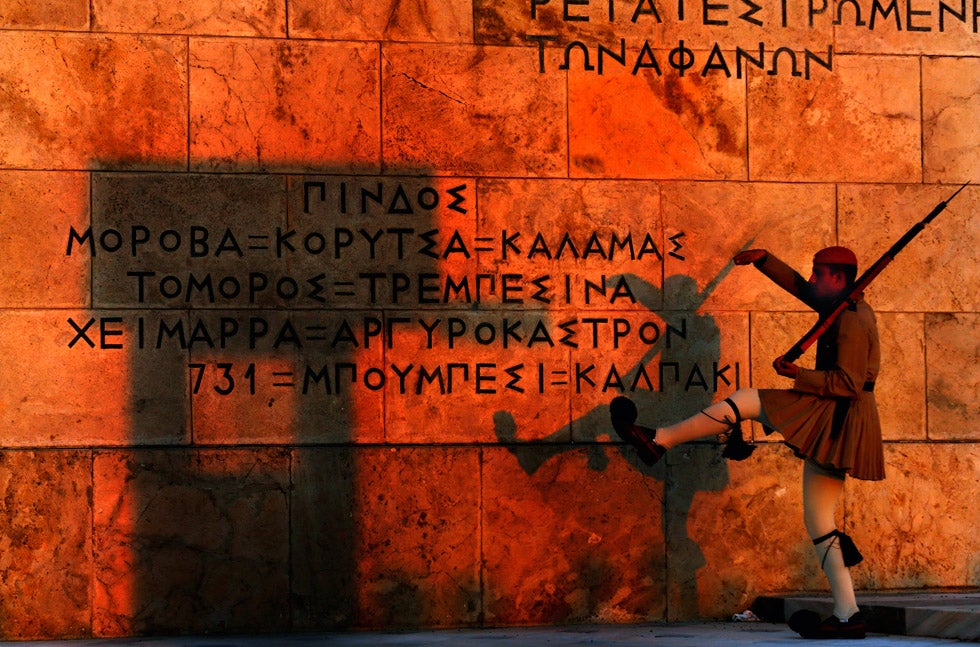 A Greek presidential guard marches past the Memorial of the Unknown Soldier in Athens. Yannis Behrakis who was previously Reuters’ chief photographer for the Israeli and Palestinian territories, has been shooting in Athens since 2002. He has been with Reuters since 1987. In 2000, he was wounded while on assignment in Sierra Leone in an ambush. He claims the only reason he was able to get away from the attackers and survive was thanks to “hostile-environment training” he had done five years earlier. You can keep up with his assignments by following his blog. 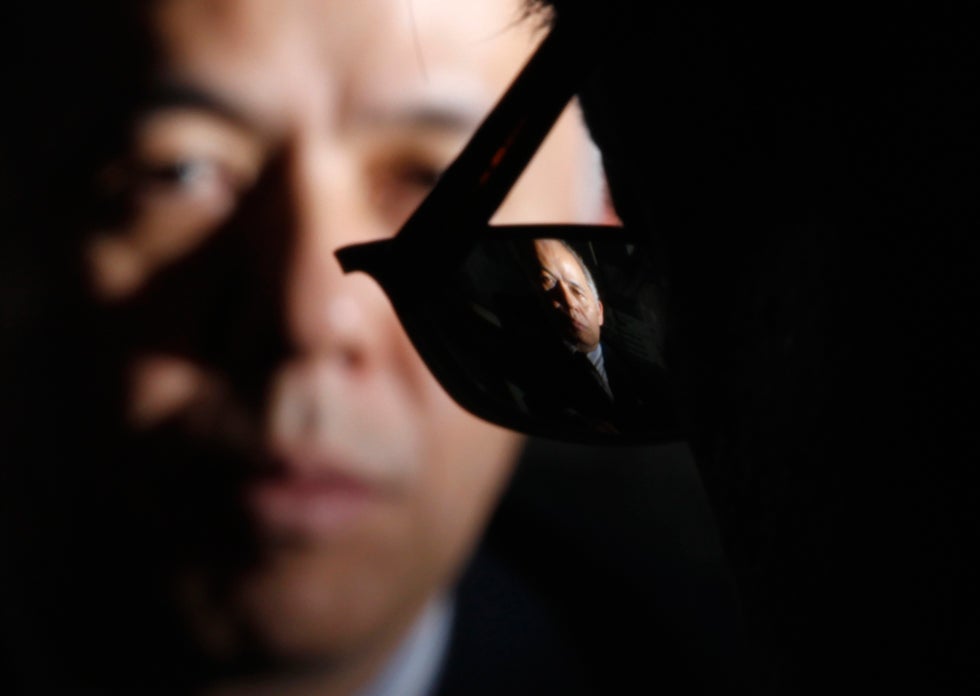 Tokyo Electric Power Co’s (TEPCO) President Naomi Hirose is seen through the glasses of a journalist during an interview with Reuters at the company’s headquarters in Tokyo. Yuriko Nakao is a Reuters staff photographer. She is based in Tokyo. 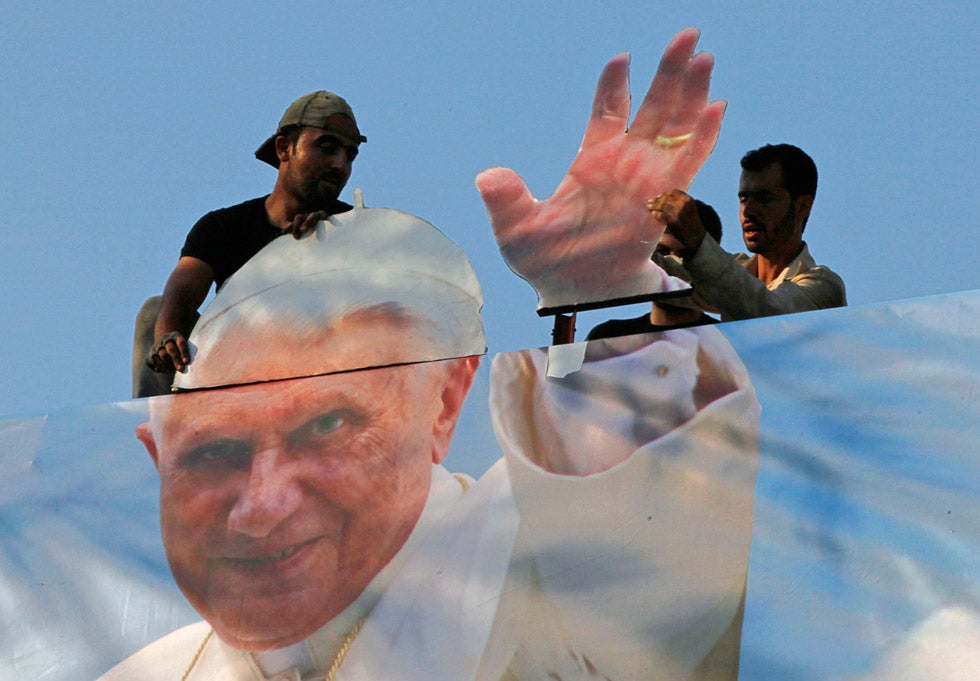 Workers hang a poster of Pope Benedict XVI in preparation for his arrival to Lebanon, in Jounieh

Workers hang a poster of Pope Benedict XVI in preparation for his arrival for a three-day visit to Lebanon. Jamal Saidi is Reuters’ chief photographer to Lebanon. 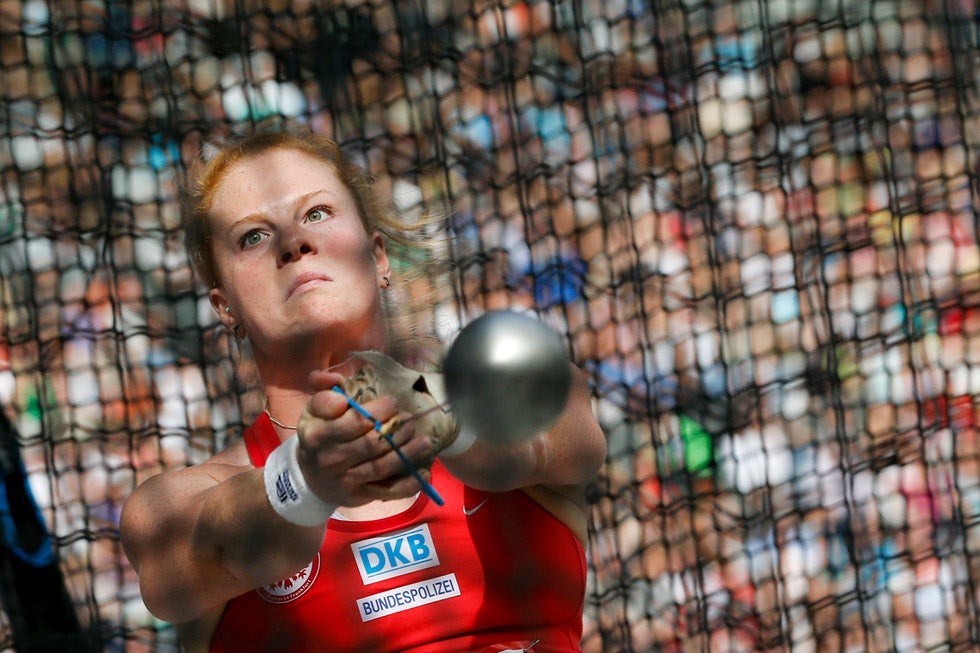 Germany’s Betty Heidler competes in the women’s hammer throw at the ISTAF athletics meeting in Berlin, September 2, 2012. Heidler ultimately won the competition. Thomas Peter is a Reuters staffer based in Berlin. Check out more of his work on his blog. 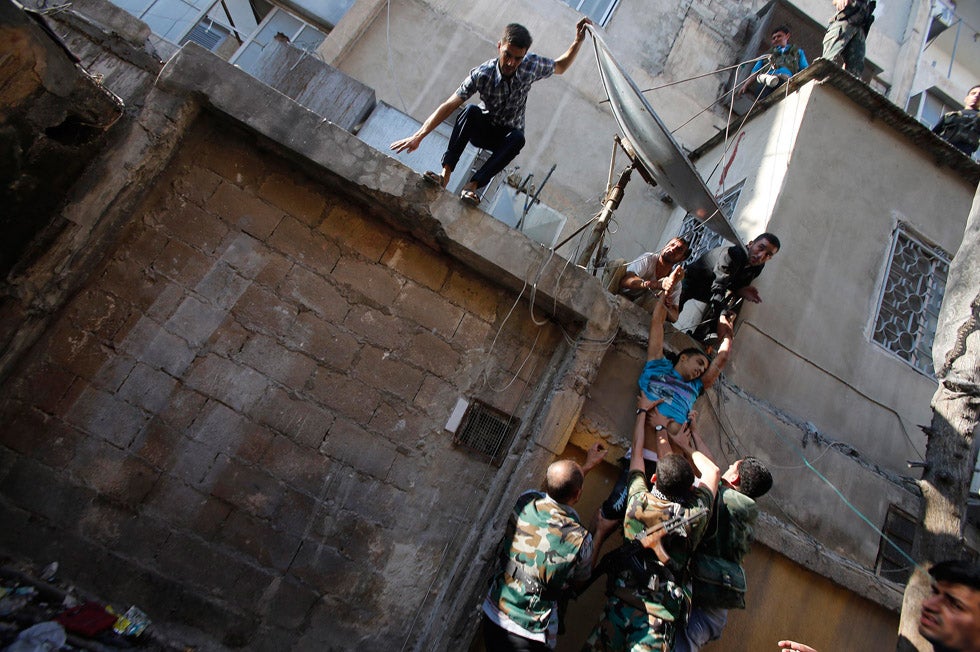 Free Syrian Army fighters carry a dead man out of the line of sniper fire after he was shot at Seif a Dawla district in Syria’s northwestern city of Aleppo. Youssef Boudlal is a photojournalist working for Reuters in Syria. See more of his conflict photography work on his personal site. 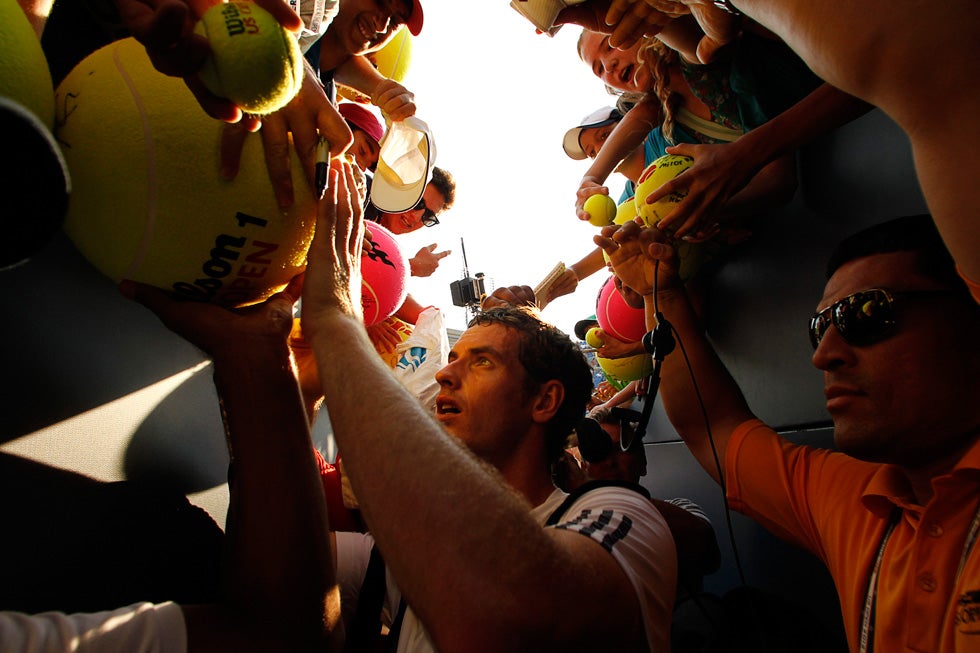 Murray of Britain signs autographs after defeating Lopez of Spain in their men’s singles match at the U.S. Open tennis tournament in New York

Andy Murray of Britain signs autographs after defeating Feliciano Lopez of Spain in their men’s singles match at the U.S. Open tennis tournament in New York. Eduardo Munoz is a Reuters staffer currently based in New York City. Throughout his career, he covered the regions of Haiti, Columbia and the Dominican Republic. See more of his work on his site. 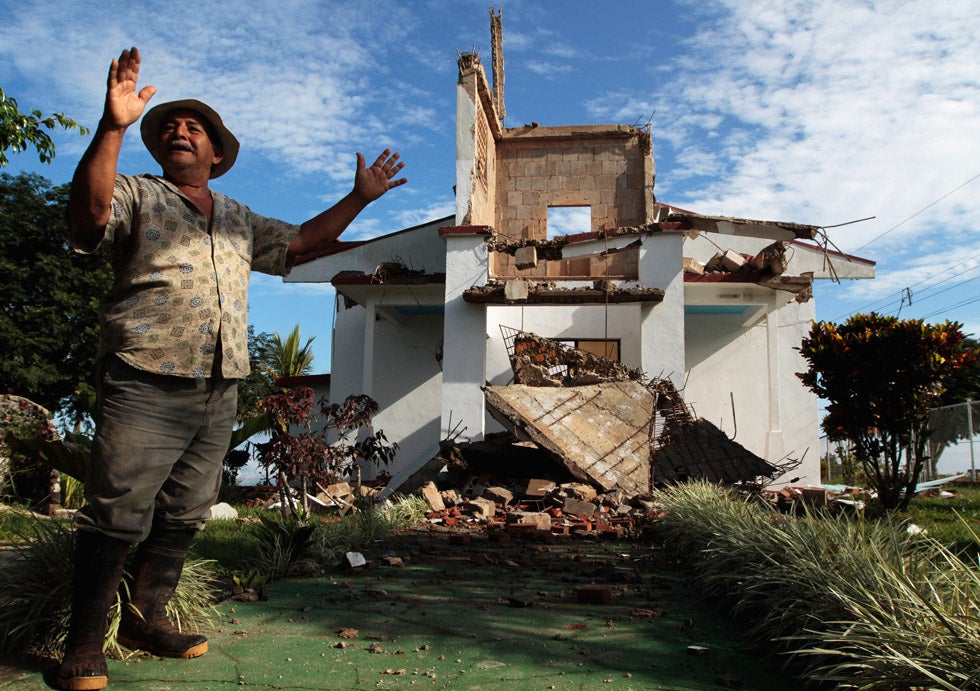 A resident of Bella Vista town stands outside the church destroyed by an earthquake in Nicoya, Costa Rica. Oswaldo Rivas is based in Nicaragua and has been a photographer with Reuters since 1997. See more of his work in our past round-up. 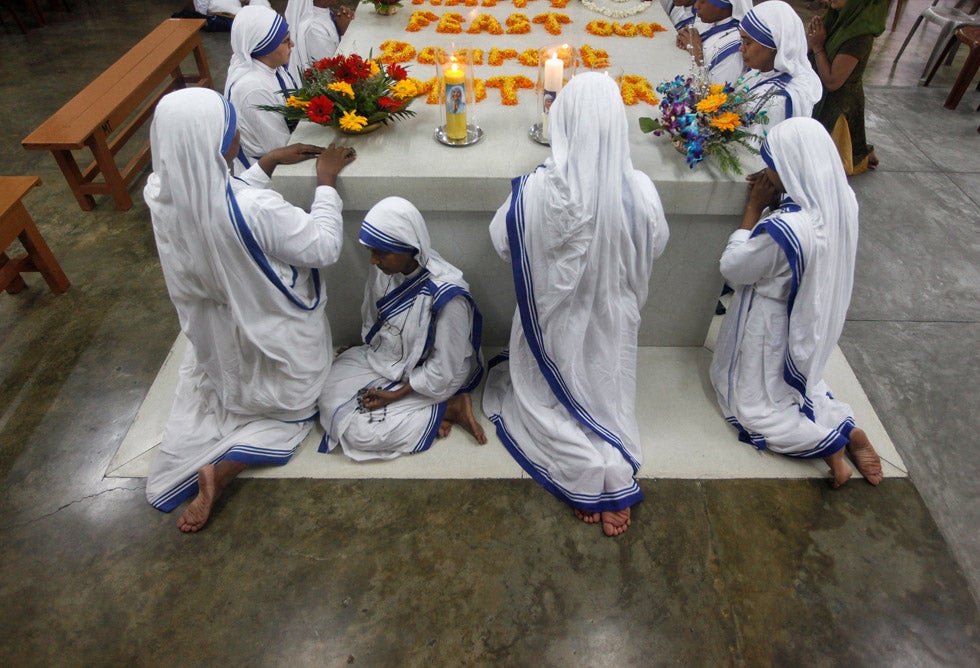 Catholic nuns from the Missionaries of Charity, the global order of nuns founded by Mother Teresa, pray at Teresa’s tomb on her 15th anniversary of her death in Kolkata. Rupak De Chowdhuri is an India-based Reuters photographer.