Photojournalism of the Week: September 14, 2012 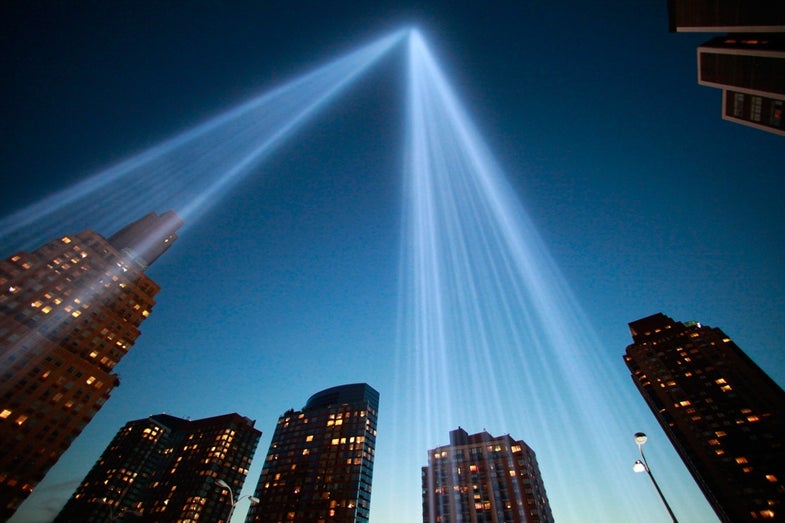 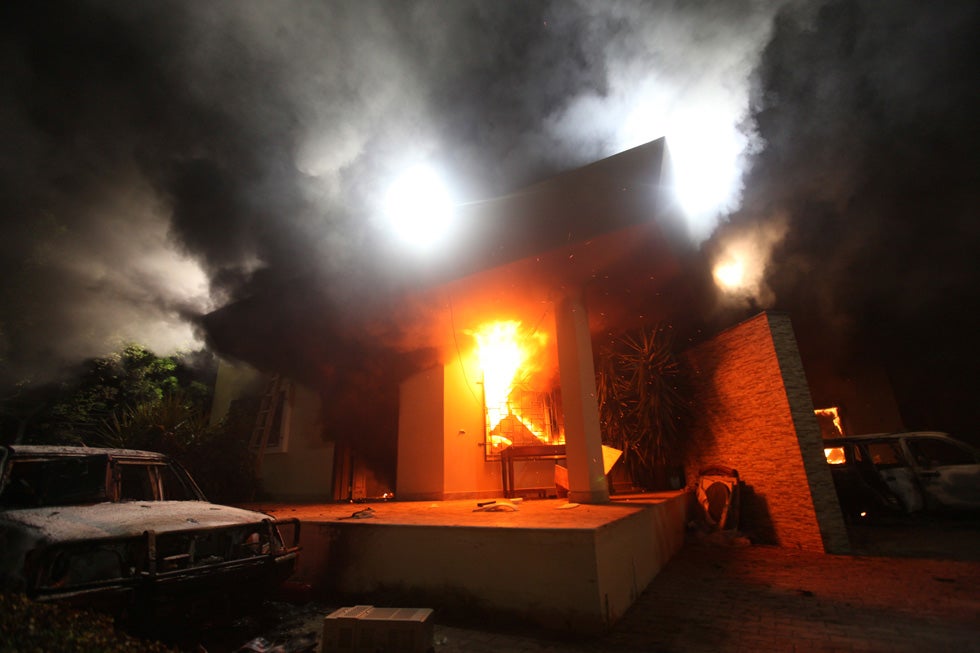 The U.S. Consulate in Benghazi is seen in flames during a protest

The U.S. Consulate in Benghazi, Libya is seen in flames after armed protestors attacked it in retaliation for a film being produced in the United States. 4 US diplomats were killed in the attack including Ambassador Christopher Stevens. Esam Al-Fetori is a Reuters staffer based in Libya. 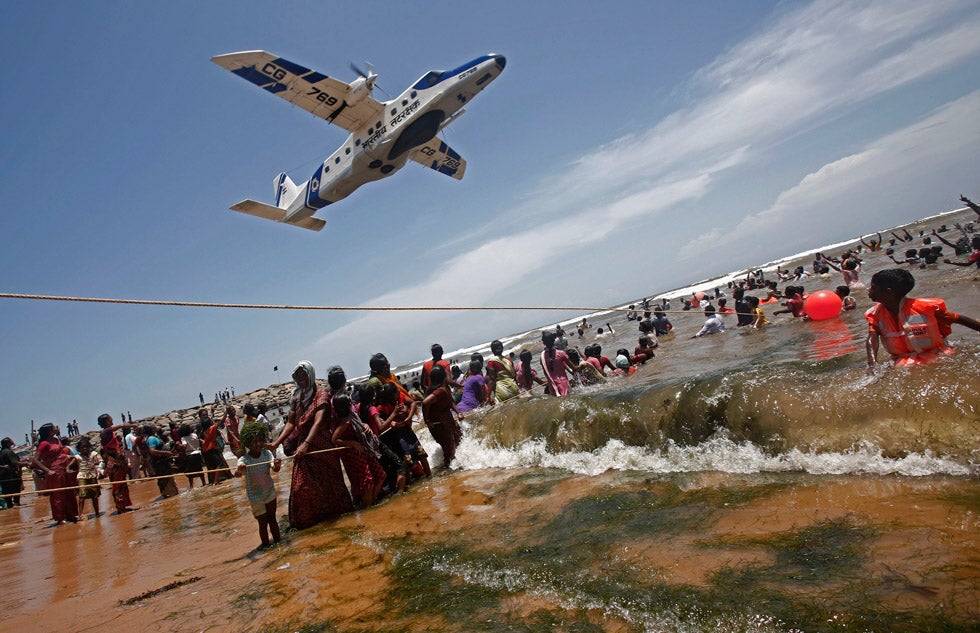 Demonstrators hold on to ropes while standing in waters of Bay of Bengal, as plane flies over, a protest near Kudankulam nuclear power project

Government planes fly over Indian demonstrators protesting plans for the country’s largest nuclear power project near the Bay of Bengal. Adnan Abidi is a Reuters staffer who has been with the agency for seven years. He is currently based in New Delhi. See more of his work in our past round-up. 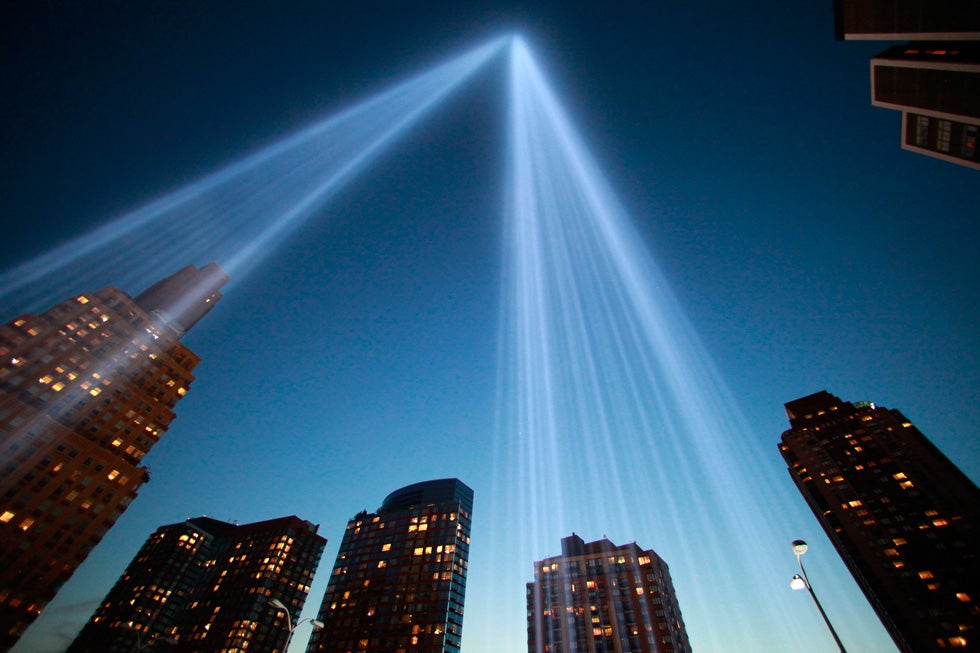 The Tribute in Light illuminates the sky over Lower Manhattan in remembrance of the 9/11 attacks on the 11-year anniversary in New York. Eric Thayer is a Los Angeles-based photojournalist who, in addition to Reuters, shoots for the likes of The New York Times, Getty and the Wall Street Journal. See more of his work on his personal site. 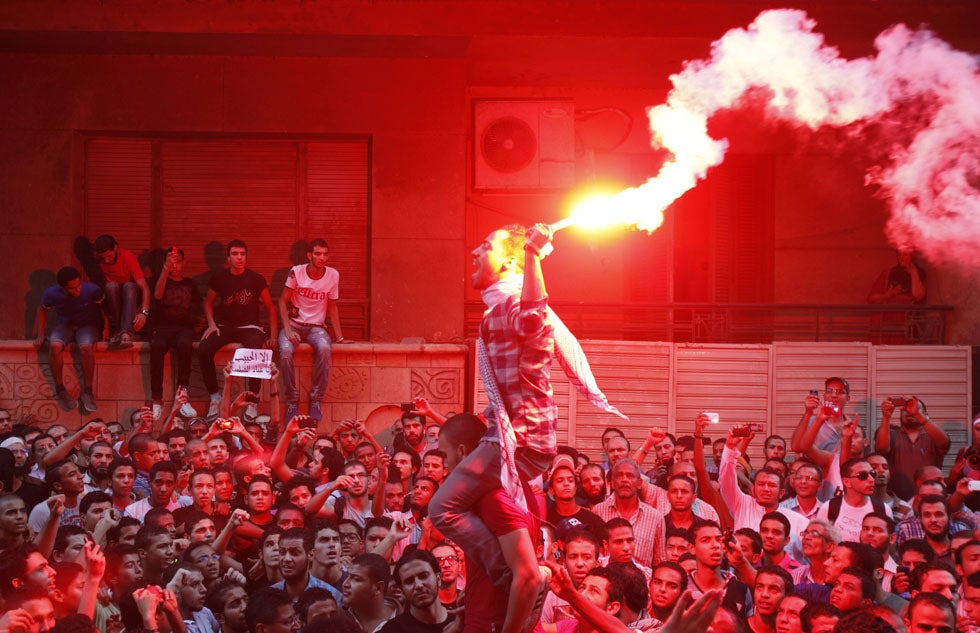 People shout slogans and light flares in front of the U.S. embassy during a protest in Cairo

Protesters shout slogans and light flares in front of the U.S. embassy in Cairo, Egypt, during a demonstration against a film being produced in the United States that insults the Prophet Mohammad. Amr Dalsh is based in Cairo, Egypt and has been shooting with Reuters since 2006. He most recently covered the revolution and democratic elections in Egypt. See more of his work on his site. 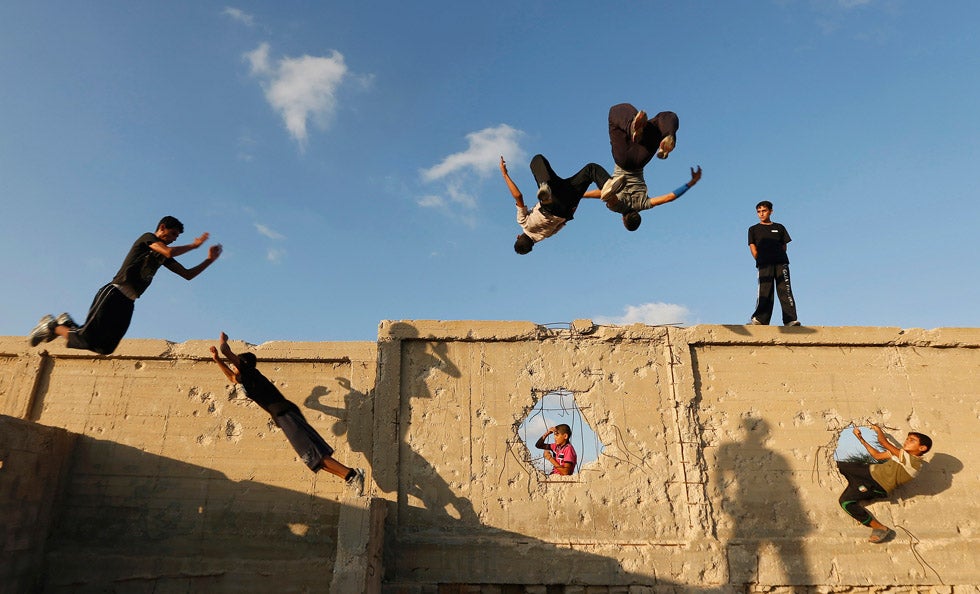 Palestinian youths practice their parkour skills in Khan Younis in the southern Gaza Strip. Parkour is a physical discipline of movement focused on overcoming obstacles. Training is held in cemeteries, and in former Israeli settlements. Mohammed Salem is a photographer shooting for Reuters, currently based in Palestine. 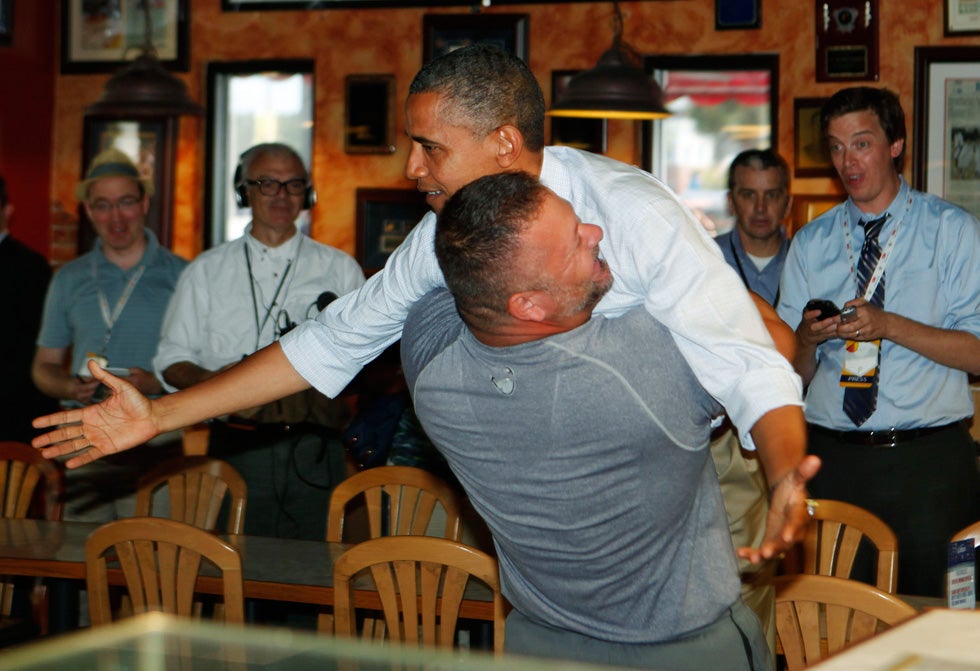 U.S. President Barack Obama is hugged by Scott Van Duzer at a pizza shop in Florida

U.S. President Barack Obama holds on as he is hugged and picked up by Scott Van Duzer at Big Apple Pizza and Pasta Italian Restaurant in Fort Pierce, Florida. Larry Downing is a Reuters staff photographer currently covering President Obama on the campaign trail. See more of his work on the Reuters blog. 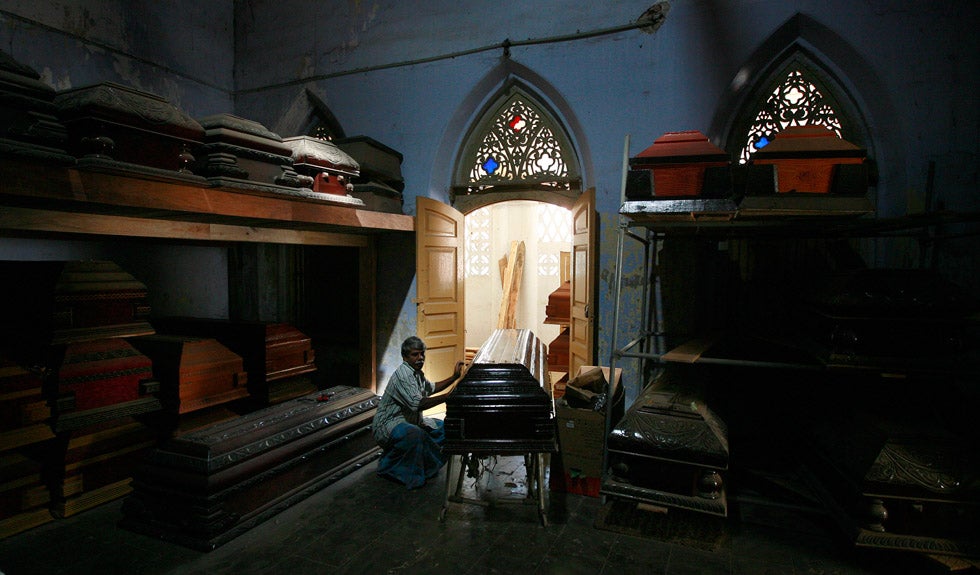 A man makes coffins at a workshop in Jaffna

A man makes coffins at a workshop in Jaffna, Sri Lanka. Dinuka Liyanawatte is a Reuters staffer based in Sri Lanka. 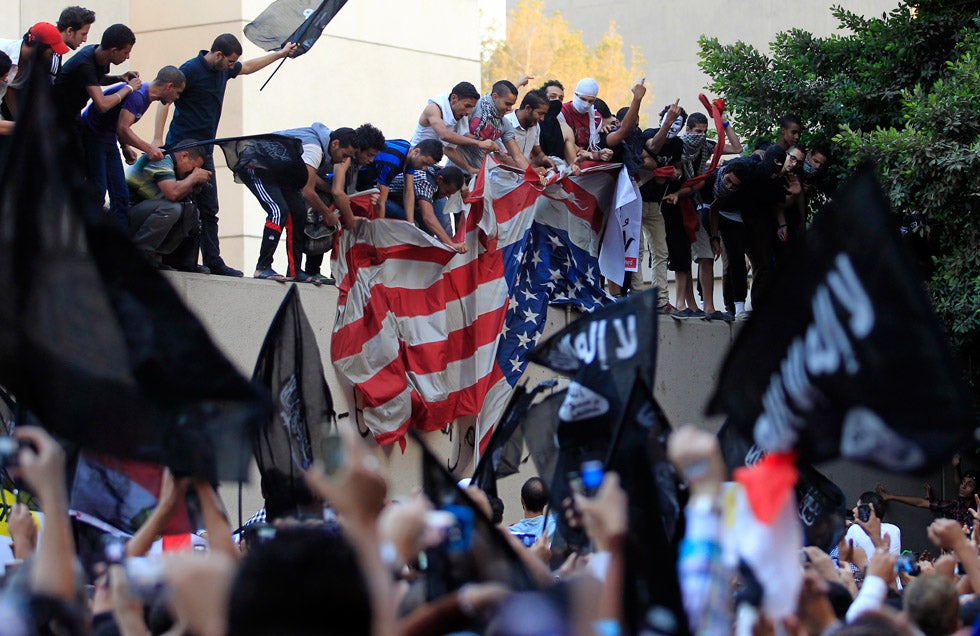 Protesters destroy American flag pulled down from US embassy in Cairo

Egyptian protesters scaled the walls of the U.S. embassy, tore down the American flag and burned it during a protest over what they said was a film being produced in the United States that insulted Prophet Mohammad. Mohamed Abd El Ghany is a Reuters staffer based in Cairo. He also shoots for the Egypt Independent. 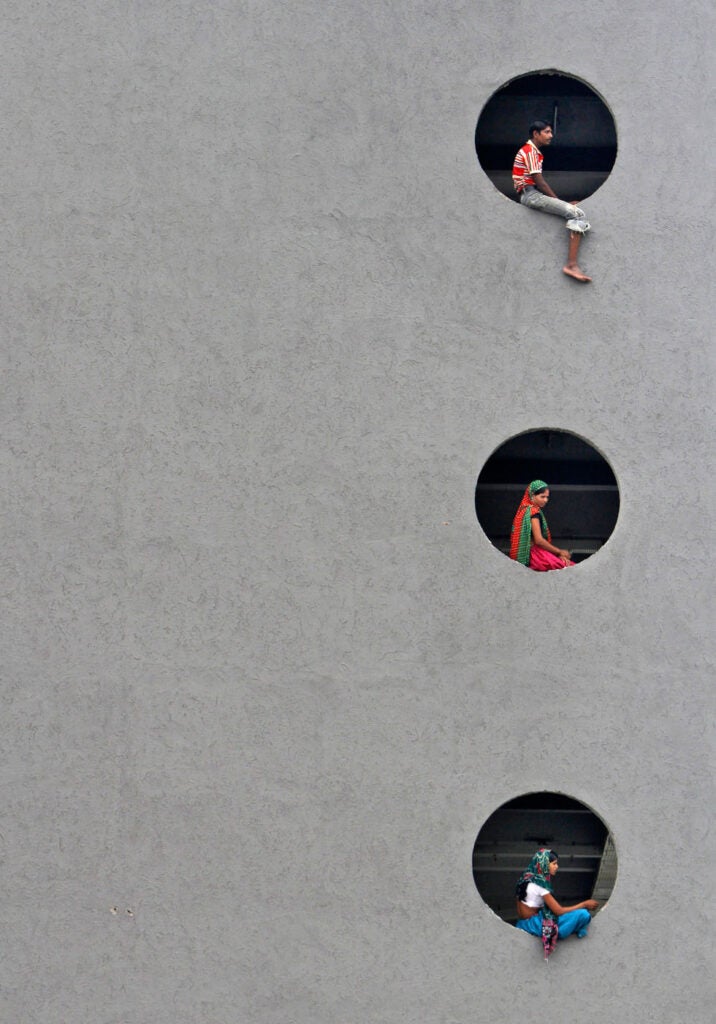 Laborers rest inside a newly constructed commercial building on the outskirts of the western Indian city of Ahmedabad. Amit Dave is a Reuters photographer based in Western India. See more of his work in our past round-up. 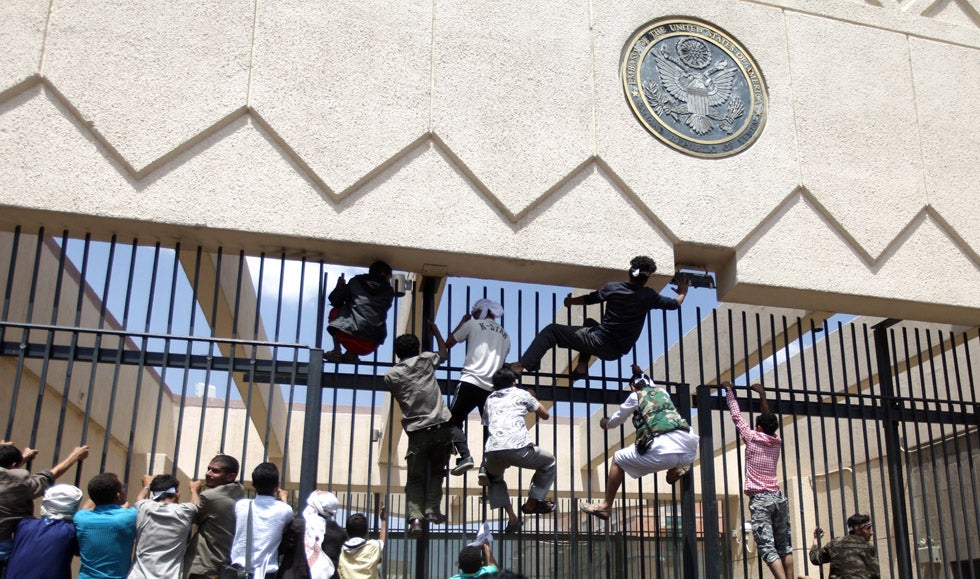 Protesters climb a fence at the U.S. embassy in Sanaa

Demonstrators climb a fence at the US Embassy in Sana’a, Yemen, during a protest against a film produced in the United States that is considered to be blasphemous to the Muslim faith. Mohamed Al-Sayaghi is a Reuters staffer based in Yemen. 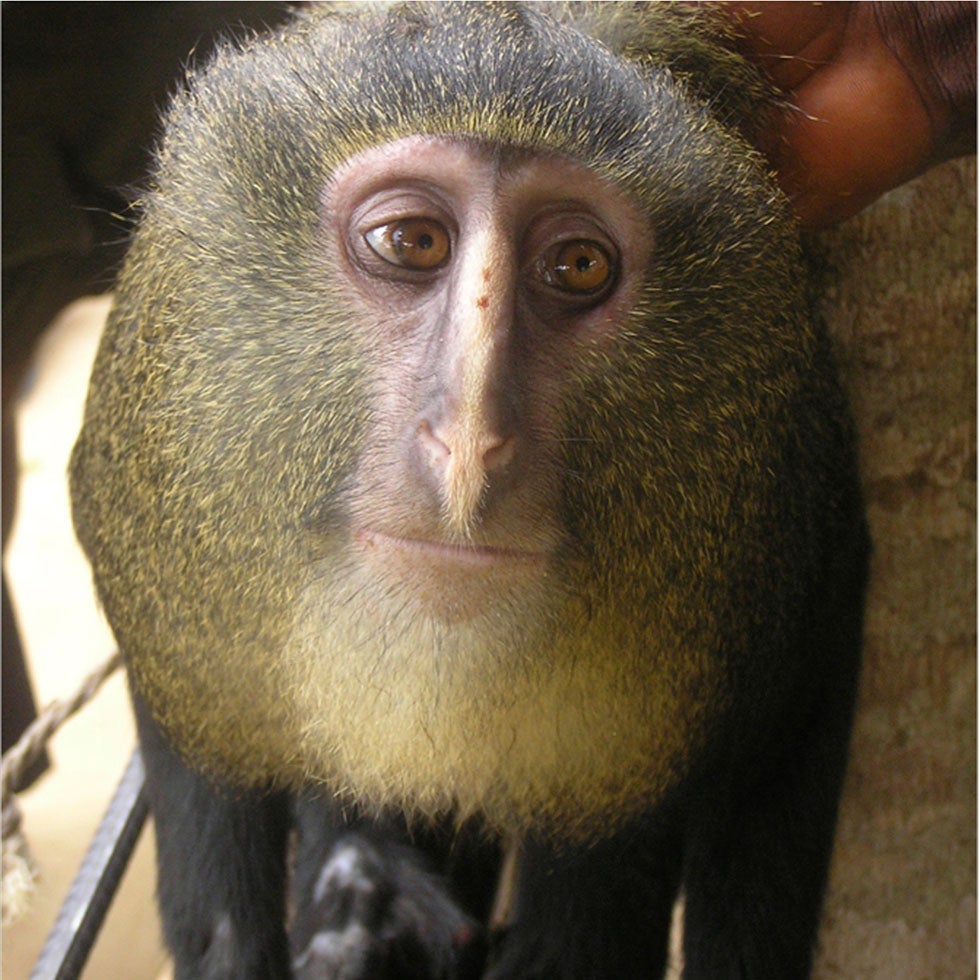 A new species of monkey found in the Democratic Republic of the Congo and identified as Lesula (Cercopithecus lomamiensis) is seen in this undated photograph from an article published September 12, 2012 in the science journal PLOS One. For more on the Lesula, check out PopSci.