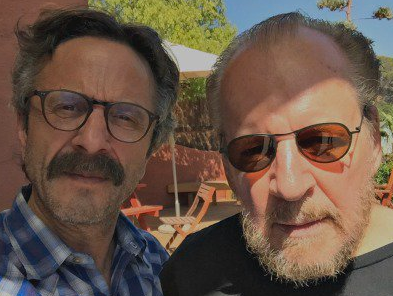 Today is @larryclarkfilms day on https://t.co/KBRiPQLutw//! Intense talk with the raw photographer/filmmaker. Gritty. Do it up! pic.twitter.com/a3VPqop4Xy

Comedian Marc Maron is well known for his winding and deep conversations on his podcast WTF, which is taped inside of his garage in Southern California. This week Maron sat down with photographer Larry Clark to speak about photography, filmmaking, and, of course, drug abuse. Maron, who was an avid photographer in high school and studied it briefly in college, says he loved Clark’s Tulsa and Teenage Lust.

The usually talkative Maron didn’t really get to much in, though: “[Larry] talked, a lot, and fast. Hold on to your seats,” Maron wrote to his listeners in his weekly newsletter.

Although the episode doesn’t have the normal ratio of Maron-to-guest banter, the conversation is totally fascinating and the episode covers a whole lot of ground. Clark speaks at length about his time photographing babies in Tulsa with his mother, his experience attending a “cornball” photography school after high school, his love of Kodak Tri-X, the making of Tulsa, his time in Vietnam, the art of printing, his time in prison, the making of Kids, and (unsurprisingly) his drug use.

You can—and absolutely should—download the full episode here, but here were some of our favorite chunks of Larry Clark wisdom from the wide-ranging interview.

On going to photography school:

“You can learn photography in six months. You don’t need to be in school. You are wasting your time and you’re wasting your parents’ money. If you really want to be a photographer, quit school, go out, and just make photographs.”

On being labeled as a photographer:

“I’m not a real photographer. I always wanted to be anything but a photographer—it was just the only tool I had.”

“No one else could have come in and done it. I was just one of the guys. They were so comfortable, if I didn’t have my camera when I walked in, they would say, ‘Larry, where is your camera?’”

“There were never any plans to show these to anybody. I was just practicing photography.”

“There was no heroin when I was in Vietnam, I would have found it. I guarantee you!”