In New York, a Graphic Story Unfolds Through Photos

This morning outside the Empire State Building, a man identified as Jeffrey Johnson shot and killed at least one victim... 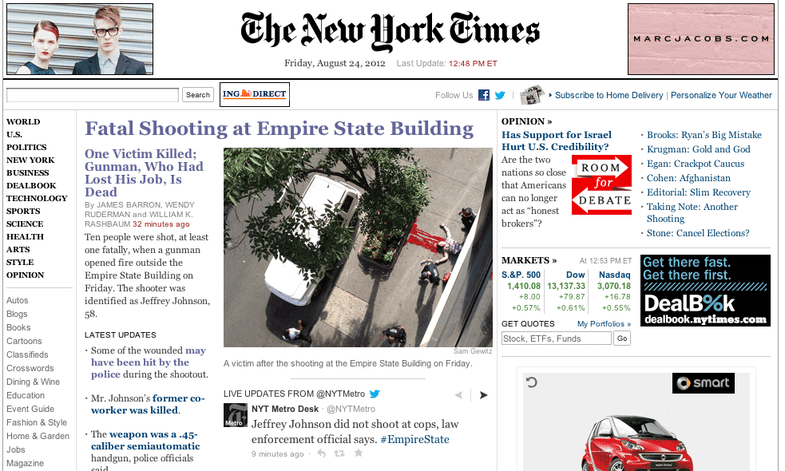 This morning outside the Empire State Building, a man identified as Jeffrey Johnson shot and killed at least one victim and was later shot dead himself by police. At least nine others were wounded in the ensuing crossfire.

Moments after the shooting subsided, the photos started to roll in.

It started with what looked like a video still of an overhead view from a helicopter or security camera, disseminated by AP, showing police on the scene.

Bystanders and eyewitnesses also took to the internet. Two graphic eyewitness photos of victims posted to Instagram immediately caught the eye of photo editors from the major wire services and the New York newspapers, where they were quickly rebroadcasted. Unsurprsingly, the comment sections (warning, graphic image) attached to these photos became sounding boards for responses to both the immediate tragedy and the issue of gun violence in general, with wildly differing degrees of taste.

With its own photographers on the scene, the New York Times rushed a graphic image of one of the shooting victims to their homepage, his blood pooling on the sidewalk where he lies, presumably dead. Response to such a prominent, grisly image was predictably heated on Twitter, split between those aghast at being confronted with such violence in such a prominent place, to those who saw the image as a brutal but necessary reminder of gun violence’s realities.

Other news services chose to aggressively watermark their photos, which, to me, adds a level of self-interest and promotion that is in some ways more distasteful than the potential negative reaction to the horrors portrayed in the image itself. It’s a conundrum uniquely faced on the web: editors for AP and Reuters could be seen reaching out to eyewitnesses in Instagram’s comment sections, seeking permission to use their photos or asking for comment. But that’s because they have to. Nothing would physically stop anyone on the web from taking the image and disseminating it further in a matter of seconds.

Interestingly, at around 1:15 p.m. after running it for approximately 30 minutes, the Times replaced the photo of the victim on the sidewalk with one of the shooter lying dead around the corner. There was less blood, and for some I’m sure, less squeamishness knowing they were looking at the body of a murderer, rather than a victim. As of now, the graphic photo is only accessible via a link in a tweet from the NY Times’s Metro desk account.

As someone who thinks about photography’s role in our culture every day, it’s fascinating to watch a tragic story like today’s unfold through images with startling speed. Thinking especially of the New York Times’s decision to run the graphic image on their homepage (an admirable one, in my opinion), I was reminded of what Todd Maisel, a photojournalist for the NY Daily News, told us for our 9.11.01: The Photographers’ Stories oral history, speaking of his controversial image of a victim’s severed hand taken on September 11, 2001:

“The Daily News ran it, and there were some people who thought it was a terrible thing to do. You know what? Too bad. This is what it was. It was a horror. The picture was the Daily News saying, ‘The horror of this day must not be reduced. You can’t hide the terrible things that occurred.’”

On the greater topic of how, why, and if media outlets should deploy graphic imagery to illustrate stories of tragedy or violence, I was also reminded of an instance from the other side of the spectrum I recently noticed in a set of photos on Boston.com’s Big Picture blog, taken by Getty photographer John Moore as he followed wounded war veterans in recovery in and around the Brooke Army Medical Center in San Antonio. In their post, Big Picture’s editors chose to deploy a black overlay on two of the images warning of “graphic or objectionable content” underneath, requiring an additional click to view the photo.

These screens are commonly used on Big Picture and the Atlantic’s In Focus (two blogs I greatly admire for their advocacy of photojournalism) to give unsuspecting or sensitive readers a chance to opt-out of photos depicting disturbing, extreme violence. I don’t decry the overall practice of putting such images behind a screen. But when I clicked to view the blocked images on this particular Big Picture post, I was shocked to see, in the second screened image, a photo of veteran and burn victim Bobby Henline performing stand-up comedy on stage, in public, at a benefit for wounded vets.

I suppose some viewers would be taken aback viewing Henline’s badly burned face and all its scars. But the image in question shows Henline actively confronting and, hopefully, reducing this reaction he now encounters every day of his life. To hide him behind a “graphic content” warning in this brave moment seems not only unnecessary, but cruel. Especially in the very moment he’s reminding us that underneath the scars, a human remains.