The effects of the earthquake and tsunami which struck Japan on March 11th of this year are far from over.... 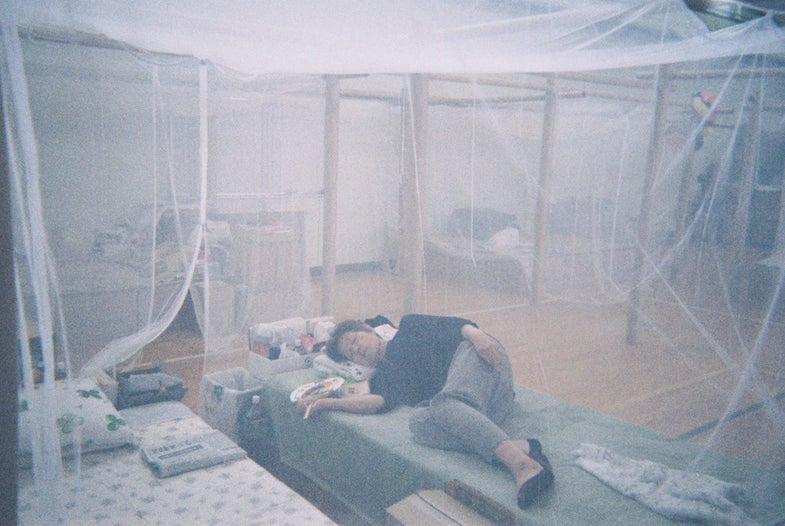 The effects of the earthquake and tsunami which struck Japan on March 11th of this year are far from over. For many people living in the Tohoku area, the situation remains dire, and it is clear that clean-up efforts will continue for years. The aftermath has obviously been a prime subject for photographers, but most of the images to come out of the area are taken by outsiders; even a photojournalist from Tokyo doesn’t have instant access to local communities.

The most compelling photographs to emerge out of the earthquake have come from ROLLS TOHOKU, a project started by the photographer Aichi Hirano. Soon after the earthquake hit, he visited evacuation centers around Tohoku, and distributed disposable film cameras to people of all ages who were sheltered there. They weren’t given any specific instructions, and after a week or so Hirano collected the cameras, developed the film and put every photo online. He repeated the same process in May and August of this year–the August photos were just recently posted to the project’s site (you can see a selection of them in the gallery above, but do check out the site itself–some truly incredible work).

The ROLLS photos stand out because they offer genuine personal insight into the situation in Tohoku. It’s easy enough to take a photograph of the physical effects of the disaster, but it’s more difficult to show people’s lives in an unforced way. The brilliance of the project lies in the complete trust and access. Sometimes the photos document really simple moments that have no obvious relation to the disaster: Many of my favorite photos just show kids playing around. Of course, other photos show the effects of the tsunami directly. To me, these photos are just as useful as photos taken by photojournalists: In each case, there’s not much more thought given to the photograph beyond documenting the raw effects of the disaster. Of course the photojournalist will take “better” photos than the amateurs of ROLLS, but here, I don’t care whether these photos are technically beautiful or not.

A couple of months ago I did an interview with a young Japanese photographer, and she told me something interesting about her photography teacher: “he suggested to me that I aim to take these photos in the same way that any regular person would—you know, the way that their grandmother or grandfather might.” It’s difficult to un-learn the ability of taking a good photograph. With the notable exception of Naoya Hatakeyama, I see many skilled photographers trying to take photos of Tohoku and failing; maybe Hirano was on to something by giving the camera to someone else.