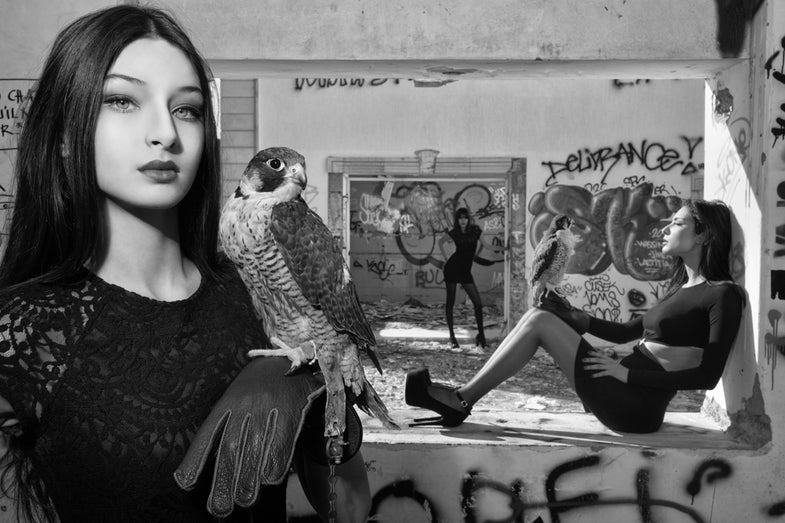 The work is on view at Tunisia’s Musée National du Bardo from September 13 to November 12, and on September 16, the Leica Soho Store will hold an opening reception for a show featuring “Africanae” and work from an additional Babej series about post-Soviet society called “Chernogirls.”

Babej speaks with American Photo about his inspiration for the series and his love of dramatic lighting.

What interested you in Tunisia? Why stage a series there?

In Tunisia, maybe more than any other country, antiquity reverberates to the present day. After all, this is the country where the Arab Spring began, triggering an intense – but, in Tunisia, largely peaceful – political power struggle between Islamists and Western-oriented secularists. The former look East, toward the Arab world; the latter view themselves as members of Western civilization. So you have this country nowadays that in many people’s heads is viewed sort of as an Eastern country. Right? [With “Africanae”] I wanted to show what kind of a mixture today’s Tunisia is and how important Western civilization and the Roman past are to Tunisia today.

The Roman Empire has fascinated me, and influenced my view of the world, since childhood days. Two thousand years of history that were marked in one way or another by a state that called itself Rome. What fascinated me most was the shifting definition of what it meant to be Roman. As Rome spread, the idea of Rome also changed. For all of its flaws, Rome was a society that transcended barriers of ethnicity and culture, with a multi-ethnic population and political elite. The province of Africa, from which the continent derives its name, overlapped quite neatly with today’s Tunisia. It wasn’t some colonial backwater, but a cultural, political and economic center of the Roman Empire.

The two locations in this series have a very different feel. Where were you shooting for _“Africanae”?_

The first scene of this series, The Villa in Carthage, speaks to the present. It speaks to what had happened in Tunisia. It takes place in a villa in Carthage: a beautiful location overlooking the Mediterranean in the part of town in Tunis that is called Carthage to this day. This wasn’t just any villa: it belonged to the Trabelsi, the family of ousted Tunisian president Zine El Abidne’s Ben Ali’s wife. Ben Ali’s regime was notoriously corrupt, and the Trabelsi clan was the main beneficiary of that corruption. Once the regime was overthrown the villa was ransacked. There is nothing. No piece of furniture or anything left. The place was entirely picked apart and then covered with political graffiti. I felt it was a great symbol of the overthrow of an old regime, as well as a rather messy post-revolutionary era. It symbolizes a society that’s in flux and doesn’t quite know where it’s going to go yet.

And the second scene, The Successors?

It shows four young Tunisian women in the context of their past as Romans. Most of the images were shot the ruins Dougga, a UNESCO World Heritage site. Dougga is testimony in stone and art of Tunisia’s Roman past. A past that is not universally embraced by today’s Tunisians. Many Islamists would rather ignore any non-Islamic cultural influence. And even some secularists have difficulties fully embracing the Roman past. This has nothing to do with Rome, but rather with French and Italian colonists appropriated Tunisia’s Roman past as a cultural justification for their presence. They thought of themselves as the heirs of Rome – and through their colonialist eyes if they were heirs, then the locals could not be.

The images in The Successors show these Tunisian women in Roman settings, in dress that is evocative of Rome. It shows them as heiresses of the Roman past that the French and the Italians didn’t want to grant them, but that is very much their own.

Lighting plays a very important role in your work. What are you trying to achieve?

It’s a key element of the aesthetic, above all because I use it to produce a sense of alienation. In this series specifically you will see lighting effects that are not commonly associated with outdoor photography. It is classic Hollywood 1940s studio-like lighting that, in most cases, very clearly is not off the setting.

It is not the natural light, and the viewer is supposed to register that it is not natural light. They look like they’re lit in the studio. It’s supposed to be that way. It’s particularly important in a series like this, where people wear clothing that is evocative of a certain time, because I really want people to feel it’s in a sense not real. It is constructed. What viewers are seeing is an author’s perspective, not a recreation of the past. The viewer isn’t supposed to feel comfortable simply immersing himself in a bygone era and pretending in his own head that these are pictures from ancient Rome, because they are not. He’s supposed to feel in a no-man’s land between antiquity and modernity; and to start thinking about the relation between the two.

It does have a very cinematic quality to it. Was that intentional?

I view my work really as sort of films in still pictures. My images are supposed to give the viewer a sense of capturing a particular moment. These people weren’t sitting still for the picture. Take the image _Sword and Shield, _where they’re all standing on the stage and one is holding the lighting for the other two — I’m reminding you this is a set. You have this perfect Greek Roman stage. You have the falcons. You have the two beautiful women in Roman-like clothing. It’s the perfect illusion here, but I’m putting a girl in who is obviously holding modern lighting equipment, which breaks the entire illusion. It’s supposed to feel like a set. The setting is real; the stage really was a stage; the women look the way we conceive of classical beauties. But you can’t get around the fact that it’s also make-believe. The viewer feels a bit stumped – and that’s exactly what I want. When people are stumped, they react by reconsidering their conceptions. They start to think.

Shadows also seem to play an important role in this work. Why?

Who are some of your references and influences for this work?

My mentor, Roger Ballen, is a big influence on my work. It might not seem this way at first: after all, his subjects tend to be grotesque men, whereas mine tend to be women who could be described as beautiful. But that’s not a fundamental difference. Roger is a master of creating a parallel universe that challenges our sense of reality. Though in a different way and with a different purpose, I share this fascination with creating parallel universes in still images, and the challenge to perceptions of reality.

Most of my references, though, are not photographers, but filmmakers from the ’30s and ’40s. If I were to pick a single most important one, it would be Orson Welles. You talk about Orson Welles you also have to talk about the cinematographer on Citizen Kane, Gregg Toland. You see that influence in one my favorite pictures from the series.

Are you referring to the fourth image in the series: the three girls and the two falcons?

Yeah. It uses the technique that Gregg Toland was really known for and Orson Welles, too. It was called deep focus. You’re using awide-angle lens like a 28 or a 35, with a very small aperture, so everything from the foreground to background is as sharp as possible. This allows me to created images that are dense in content – and it frees the viewer to take his own journey through the image, rather than me telling him what is important and what isn’t. Technically, it means I almost never shoot below F8 and F11 in my “normal”. It also means I need a lot of light.