As we wrote last week, Andreas Gursky recently re-claimed the title of most expensive photograph in the world, when his... 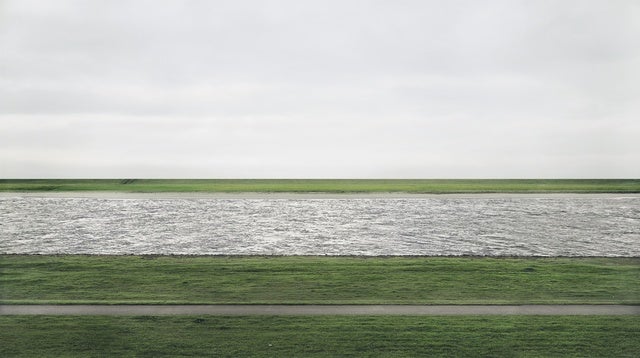 As we wrote last week, Andreas Gursky recently re-claimed the title of most expensive photograph in the world, when his photograph “Rhein II” sold for $4.3 million at Christie’s. The story received a lot of attention online. A post on Wired’s Raw File blog, headlined “Really? $4.3 Million for That Photo?,” is one of the leading examples of the reaction most people had. The article provoked a storm of angry comments wondering how such a “boring” photo could yield such a price. But to single out Gursky as being somehow at fault here is taking a very narrow view of things. Let’s examine what happened.

The author, Jakob Schiller, starts off by presenting a few reasons why the photograph might have sold for so much, like technical skill and rarity. Then, an anonymous “gallery professional” presents the viewpoint that Gursky represents “a growing trend where photographers are working hard to re-brand themselves as ‘artists’ so they can sell their pieces in the higher-priced fine art markets that don’t traditionally trade in photography.” The anonymous gallery professional, who is paraphrased but never quoted, is also said to have said, “it’s important to call a spade a spade and avoid turning photography into something it’s not.” The comments generally dismissed the work, with more than a few along the lines of “alaxsxaq,” who wrote, “I could have taken that photograph as could have thousand of others armed with a camera.”

So why did we come to this point of blaming Gursky for all this? It seems like the article confuses two things, to sensational effect: the merit of the Gursky photograph as art, and its value as an economic object. The Wired piece ignored this first question, and the commenters jumped all over the work as an example of nonsensical contemporary art. Instead of railing against Gursky, though, it might be more productive to rail against the art world. After all, in the same Christie’s auction, a Mark Rothko painting sold for $18 million, while a Cindy Sherman photograph sold for $300,000. The price for the Sherman is not even a tenth of what she sold for earlier this year, but it’s still a sum of money that could get people riled up, especially given Sherman’s technique as a photographer. Personally, I like Gursky’s work, and “Rhein II” seems like a fine photograph, but I couldn’t tell you why it deserves to be worth exactly $4.3 million! The excesses of the art world is a different question, and it’s one which we should take seriously. Turning this piece of news into a witch-hunt against Gursky just, well, cheapens the discussion.

PS: If you were not on the internet in 2007, this link will explain the title of this post.