“She was shot in the heart,” Kathy Shorr says of a 77-year-old woman named Marlys, whom Shorr photographed in July... 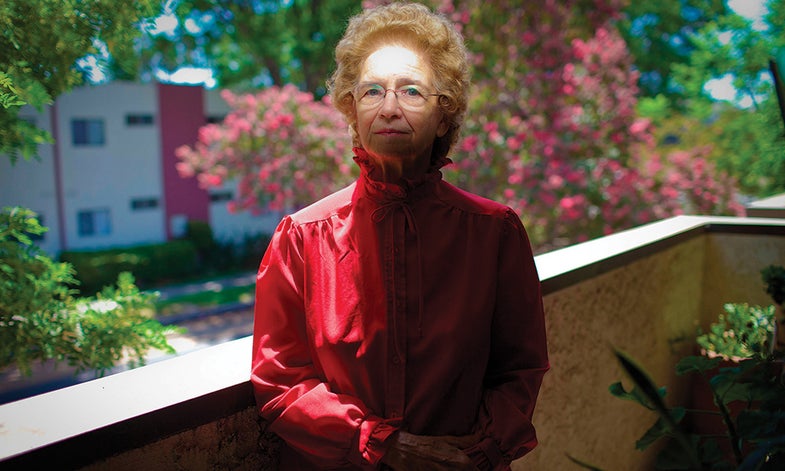 “She was shot in the heart,” Kathy Shorr says of a 77-year-old woman named Marlys, whom Shorr photographed in July 2014. “Shot by her husband when she was 62. And she was married when she was 15. He had abused her, and their four children, her whole life. She was 13 when she met him, and she thought, ‘This is how relationships are. Men act like this.’

“But she became her own person after this happened,” Shorr continues. “He’s 80 years old now and he’s in prison for the rest of his life. And she speaks for an organization in California called Women Against Gun Violence. When we were sitting and talking, her strength was so powerful—and this is a woman who was bullied and treated poorly for most of her life. I’m thinking, ‘How did you not know that you were this person?’ She’s very strong.”

Marlys is one of more than 30 people Shorr has photographed since 2013 in her portrait series SHOT, which focuses on survivors of gun violence in the United States. “When I talk with the survivors, I think, ‘These are amazing people!’ The force of their energy is so positive and strong, I’m humbled by it,” Shorr says. “I haven’t felt sorry for them; I’ve felt amazed by them. Which is very different.” When Shorr began the series she hoped to show the toll of gun violence—a subject she didn’t expect to be so inspiring. “You think about people who pass away, but you rarely hear about what’s happened to the people who have to put the pieces together and continue with their lives,” Shorr says. “And [gun violence] is a nationwide phenomenon: Every race, every nationality, every socioeconomic class is affected. This could happen to anyone.”

Shorr has sought out a variety of subjects from across the country, with a goal of photographing 100 people and an eye toward a book and exhibition. (Her Tumblr page is stopshootin.tumblr.com.) “I’m hoping the similarities between people, rather than differences, will draw interest,” she says. Her subjects range from people in the wrong place at the wrong time to victims of domestic violence; from low-profile sufferers to high-profile casualties such as Bill Badger, who took down the shooter in the attack on Arizona Congresswoman Gabby Giffords, and victims of the 2012 shooting at a movie theater outside Denver, Colorado.

“For the Aurora Batman shootings, I got a list of the survivors’ names and wrote letters,” Shorr says. “One wrote back: Moni, who was shot in the hand. She’d gone to the movies with her friend, and he was sitting next to her and he was killed.”

As part of her research, Shorr often pulls out her iPhone to record a one-question interview: “Do you think you are lucky?” The answers vary but skew positive. “Most say they are blessed, it could have been worse, these kinds of things,” Shorr says. She’s struck by the reply of Jon, a former police sergeant from Belleville, Illinois, who was shot in the head during a robbery in 2006, leaving him with a disfigured face. “I think I am very lucky with what transpired that day,” Jon says in his video. “Two officers pulled me from the house, I was so close to the hospital. The way things transpired, it’s like all the dominoes were in place so that they were falling the good way. And that is why I am still here today.”

Shorr notes that her study group includes people who are not blameless. “I photographed two people in wheelchairs who are former gang-bangers,” she says. “Now they are in an organization called Wheelchairs Against Guns. They go to schools and say, ‘We lived this fast life, and look what happened to us.’ They are spokespeople for anti–gang violence. And just because somebody did something wrong doesn’t mean they should be shot.”

Shorr says the most vocal critics of gun culture are those who’ve been shot by someone who’s mentally ill. “They are the most angry about the circumstances,” she says. “The NRA has a tactic of making blanket statements: ‘They want to take your guns away.’ But if it were broken down, most people would say, ‘I don’t think somebody mentally deranged should have a gun.’ The dialogue has gotten so polarizing. I’m just trying to bring the human element back into it, to say, ‘These are people like us who have had this happen to them.’ And maybe there’s a way to put the brakes on this, and do something.”