Japanese Photographers Reflect on the Devastation of 3/11 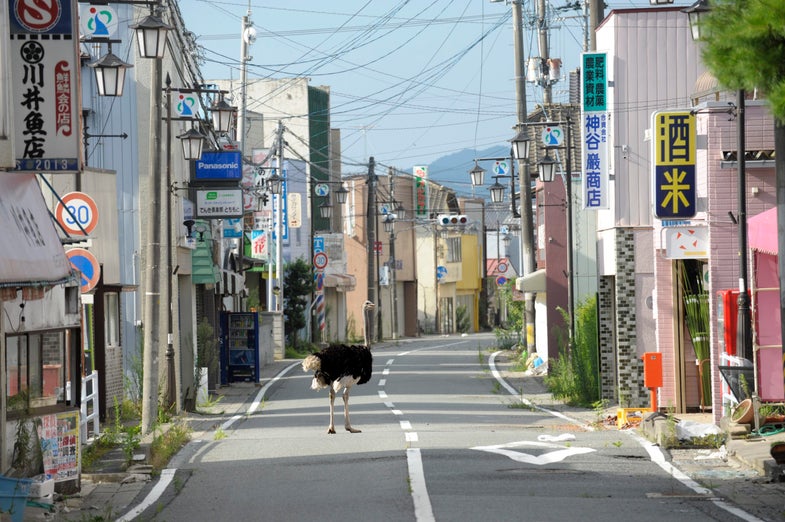 Five years ago northeastern Japan was rocked by a triple disaster: First came the 9.0 Tohoku earthquake, an hour later the huge quake caused a massive tsunami, the tsunami eventually set off the nuclear power plant meltdown at Fukushima. More than 18,000 people died that day and approximately 400,000 were displaced.

The catastrophe was one of Japan’s most devastating, and in the age of social media, one of the most documented. Because of platforms like Twitter, Facebook and Youtube—which survivors utilized in the days after the disaster to alert loved ones of their whereabouts and spread news about the conditions in the area—the repercussions of 3/11 were felt around the globe.

To pay tribute to the fifth anniversary, New York’s Japan Society is hosting In the Wake: Japanese Photographers Respond to 3/11, which opens today. The group show features 17 Japanese photographers whose work contemplates the devastation and ongoing recovery efforts in the country.

“It was one of the most photographed disasters,” says Yukie Kamiya, Gallery Director of Japan Society. “It was such a big shock, we often didn’t realize what had happened. Photographers had some distance, an objective point of view. The process of photography is similar to the process of recovery.”

First organized by the Museum of Fine Arts, Boston, the New York show features nearly 100 images that are divided into three distinct sections: journalistic coverage, experimental photographic techniques and the development of a visual narrative for Tohoku, the remote region that was the epicenter of the quake.

The exhibition opens with an eerie set of photographs and a letter written by photographer Leiko Shiga, addressed to “everyone who has been worried about me.” Shiga was living and working in Tohoku when the disaster struck.

“The tsunami was nature in all its raw power. It was terrifying beyond imagination,” she writes. “When I think of all those who died, swept away in that unequaled terror, my mind simply stops working. No amount of caring for them on my part can reach those who [were] swallowed by the water [and] lost consciousness in such terrible suffering.”

Her heartfelt words set the tone for the exhibition and inspire the question that each artist seems to grapple with: How does a country begin to heal itself after such a powerful natural disaster that was experienced in a variety of ways?

The first gallery is where viewers will find the most traditional journalistic approach to attempt to answer this question. This portion of the exhibition includes Yasusuke Ota’s image of an ostrich roaming the abandoned streets of Fukushima, Rinko Kawauchi’s digital slideshow features two domestic homing pigeons in searching for their home amongst rubble and Naoya Hatakeyama’s large scale landscapes of the devastated remains of his hometown. The work slowly transitions into the more abstract.

At first glance Shimpei Takeda’s black and white photographs resemble the starry night sky. They are actually samples of radioactive soil from the Fukushima disaster site exposed directly to photographic plates—the bright “stars” in the images are actually the radioactive particles. Takashi Homma’s still lifes of contaminated mushrooms are reminiscent of the infamous atom bomb image from Bikini Atoll.

Japan’s traumatic modern history is revisited yet again in Takashi Arai’s series of daguerrotypes. The photographer used the 19th century process to preserve iconography from the atomic bombing of Hiroshima and the Fukushima meltdown. Mounted in floating glass, these daguerrotypes take on a jewel-like quality when they are viewed in person.

As viewers move into the south gallery the images become more experimental in nature. Tokyo based Nobuyoshi Araki violently slashed his black and white negatives in rage and despair on 3/11—a response that Kamiya explains was the way for the photographer to chart the change that he felt in himself after that day’s events. In one image the black scratches pierce into the umbrellas of city-dwellers crossing a busy street and are reminiscent of the black rain that followed the bombing of Hiroshima.

The final section of the exhibition is dedicated to Tohoku and prominently features more work from Leiko Shiga. This region of Japan has a rich history of folklore, happens to be a a major source of food production for the entire country and was at the epicenter of the disaster. Shiga, whose letter is presented at the beginning of the exhibition, lost everything when the quake and tsunami hit including her home, a studio, cameras and nearly a year of photographic work. As Tohoku rebuilt Shiga began working on a collaborative and surreal body of work with the village people of the region called “Rasen kaigan (Spiral Shore)” to recapture the essence of this region’s mythical roots and remember what was lost on 3/11.

“The different experiences coexist together,” Kamiya says, explaining what she was thinking about as she organized the work into the three distinct sections. “My question was how can we remember this disaster in a variety of ways, not just in one way.”

In the Wake: Japanese Photographers Respond to 3/11 will remain on view at the Japan Society through June 12.