Insider Views of Life Behind Bars As a Teenager

The complicated nature of making pictures inside prisons 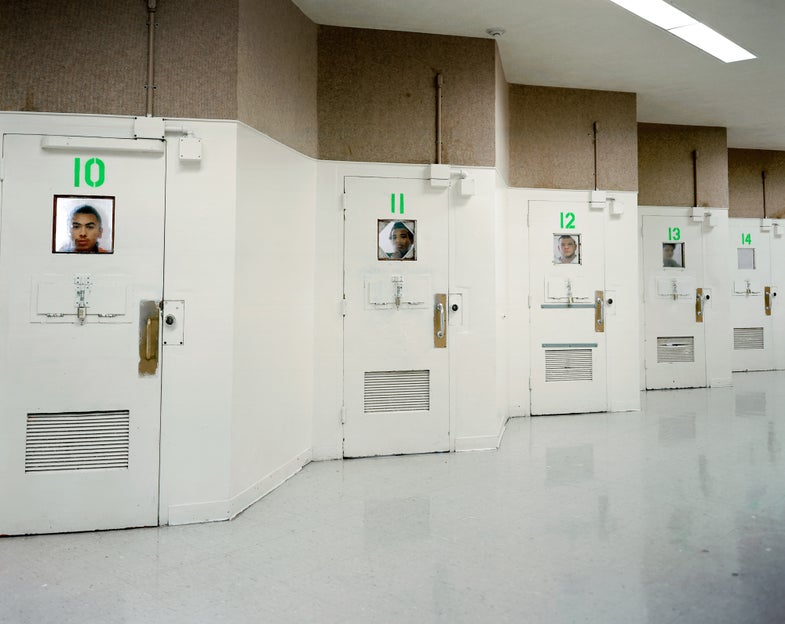 Steve Davis spent nearly a decade working in youth prisons throughout Washington state, although when you ask him he still thinks it was a bit of a fluke that he ever got access to begin with. What started as a once a week gig teaching photo workshops to a group of young inmates in 1997 eventually turned into a multi-year project that had Davis shooting formal large-format portraits of his incarcerated students.

In total, Davis spent eight years on the project, teaching and shooting in different facilities across his state. Although Davis stopped actively working on the project in 2005, it has picked up traction recently. The inmate-generated work was featured in the Pete Brook’s Prison Obscura Show at The New School earlier this year and now, Davis is looking to publish a book through Minor Matters. “Unfinished” will bring the formal portraits, stark prison interiors, and the images created by young inmates together. Davis is currently pre-selling copies of the book through Minor Matters’ site through Aug. 15, 2015. If he hits his pre-sale goal of 500 copies, for every copy that is sold, Minor Matters plans to donate a copy of the book to current residents of youth detention centers.

In the final week of his pre-sale period, Davis spoke to American Photo about gaining access for the project, the importance of imagery for incarcerated youth, and how sometimes it takes a few years for an audience to catch up to your work.

How did you first start photographing inside these youth prisons?

I was asked to go and photograph this program where they bring in artists to teach various workshops: music, drawing, theater… I was there to photograph it for an annual report. We got into a conversation of bringing in a photographer and I was very enthusiastic about that. It was two years before I heard from them again. They invited me to go in and begin teaching a workshop at a place called Maple Lane. I think they thought I could also just take more photographs that would help promote their whole residency program.

They wanted basic day-in-the-life prison pictures. I wanted to do something very different. I asked if I could do it more in the form of portraiture with a large format camera. I approached it in a way that I personally had never seen it approached. They said, “Sure.”

So were you doing the portraits and teaching these teens photography simultaneously?

There was some overlap. I might spend part of the day working with the kids, with their cameras, or bringing back pictures and editing them. Then, maybe I spent a couple of hours taking pictures. Other times, I would just go in on a weekend with the camera. There was a lot of grey area as to what I was doing at any given moment. Once I was in there, there was a lot of confusion—especially with the kids—what they can point the camera at and what they can’t point the camera at. Cameras were confiscated. It took a little while before people sort of understood that the cameras were part of the landscape as long as I was there.

Why were you interested in shooting large format portraits?

I think I have a photo-masochistic tendency to a certain degree. I’d done a little bit of 8×10, but not much. I thought, this is a chance to embark on something in a whole different way than what I would normally do, and what they think I’m going to do for them. That’s always attractive to me when I do a photography project. I didn’t want it to look like standard photojournalism either. Part of the way you come in is with a little bit of theater too. I wanted the quality of the 8×10 camera, but I also wanted the dynamic to be a little different. I figured, if I go in with an assistant, lights and this giant camera, the kids are going to think this is some real big deal. They did and they were all begging to get photographed. If I asked them, they inevitably said yes. It was an exciting little moment, I think. That was the theater part of it.

Why were these formal portraits an interesting way to approach the story?

I think what I wanted to do was I wanted to say, “Let’s forget where they are and try to focus on who they are.” That is as far as it goes. Here are some actual identities. Here are some actual faces. I’ve been criticized because I don’t attribute what they did to get there. I wanted you to approach them with a certain degree of neutrality. Some people have said, “Well, they could just be high school portraits.” That’s a compliment. I want that.

When kids came and sat for a portrait what kind of direction were you giving them?

I would sometimes give them a little bit of direction. It’s not like I can take 20 pictures. I usually never took more than two of anybody. I’d be very careful with the placement of their heads. I might ask them to look over here or look over there or just look straight into the lens. The actual shooting was usually pretty quick once they actually sat down in front of me and my set up. It was not a real elaborate thing where I got to spend a really long time with any one subject.

I understand that you would always try to give the kids a copy of the portrait that you had taken of them—can you speak to the importance of giving these young inmates printed images?

The pictures they took of each other were probably more important to them than the ones I took of them because they were getting to do their poses. As long as they weren’t doing overt gang signs—which they actually did tons of—they could keep the photographs. So they would sell them to the other kids and things like that—they were little entrepreneurs with photography in there.

Eventually you started taking more than just portraits though, focusing a bit on the interiors of these institutions, tell me about that shot where the four inmates are staring out of their cells at you—how did that come about?

I had gone into a facility [Green Hill’s School] and that picture was taken in their Intensive Management Unit (IMU), which is just another name for solitary. They were literally 23 hours in their cell. When they were out of their cell, they didn’t get to play with anybody else. They had no recreation equipment. They basically had nothing to get out their cell for. I saw that when I was in there without a camera. I don’t even know why they let me in that far. I went to one of the administrators that I had a really good relationship and said, “that place looks really scary. I want to photograph it because I think it’s so awful.” I was pretty sure he’d say, “Well, you can’t do that,” but he said yes, which I was not expecting.

I went in a couple of days later with my assistant. On the other side of the hall there are no more cells. They don’t even get to look at kids across the hall from them. They don’t get to see each other. They’re all looking at me, but they don’t know the others are looking at me. I was actually setting up the camera in the other direction to take a picture and my intern said, “Hey, why don’t you turn around?” I turned around and I realized they’re all staring at us and none of them knew the others are staring at us, too. Some people said that’s a setup shot. It’s not a setup shot. That’s just a straight shot. I took two exposures. I think one with a flash and one without a flash.

It’s a really stark image—was that moment one of the more shocking things that you witnessed while photographing in these facilities?

The singular most shocking thing was the IMU. There I saw the outdoor basketball court that hadn’t been used in two years. The balls were all deflated. A rec center that had everything torn out of it. The vents over the doors had been steeled shut with a plate of steel. I saw chairs where they strapped down kids. Kids walking around in chains and shackles and acting like it was nothing—some of them weren’t ever released unless they were shackled. That was pretty shocking to me. It tended to not hit me until I got home, what I had just seen.

You started this project in the late ‘90s and stopped making portraits almost a decade ago, yet there seems to be a renewed interest in the project—why do you think that is?

What happened is the work has caught up with the political news landscape. My work hasn’t changed. You could see this work years ago, but now I think people are trying to unravel it and make sense of it. My work seems to fit into the conversation, which I’m really happy about. I guess the creation of something and the audience of something don’t necessarily exist in the same time and space.

Photographs made by youths in Steve Davis’ prison workshops will be on show in Prison Obscura at the Duderstadt Gallery, University of Michigan, Ann Arbor, MI, from September 10-24