If you’re one of the 9-million people who “like” Humans of New York on Facebook you may have noticed that... 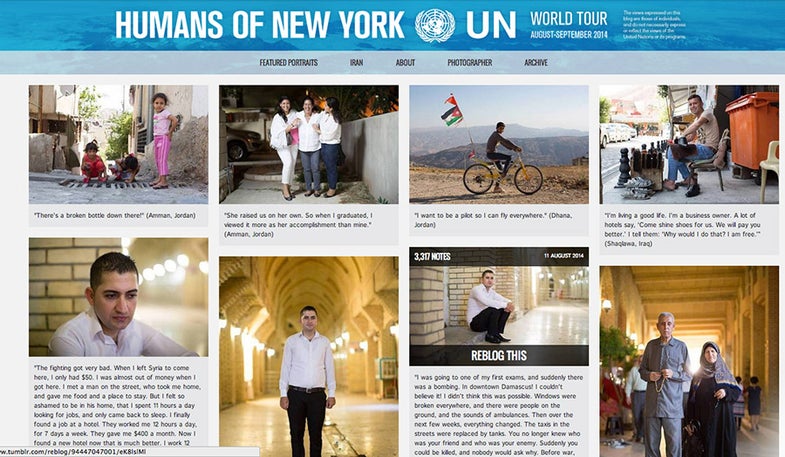 If you’re one of the 9-million people who “like” Humans of New York on Facebook you may have noticed that Brandon Stanton has left the country. Last week, the photographer in partnership with the United Nations set out on a 50 day journey across ten countries to snap portraits and collect stories from people across the globe.

“The point of the trip is not to ‘say’ anything about the world. But rather to visit some faraway places, and listen to as many people as possible,” Stanton wrote to his followers on Facebook.

Although Stanton may have intended not to say anything about the world—his timing made it impossible not to. Stanton touched down in Erbil, Iraq and started photographing a day before the U.S. military started airstrikes over the country and the Isis advancement and the US-led intervention certainly gave his photos from the region an overtone of war. Stanton has a stock list of questions he typically asks his portrait subjects to illicit the anecdotes that become his captions, but in Iraq, these questions weren’t received the same way.

“With people fleeing war, it is absolutely impossible to discuss anything beyond the present moment,” Stanton wrote on his blog on August 8. “Their circumstances are so overpowering, there is absolutely zero room in their minds for any other thoughts. The conversation immediately stalls, because any topic of conversation beyond their present despair seems grossly inappropriate.”

This week Stanton is photographing in Jordan and so far the portraits have been more in line with the type of work Stanton makes in New York. In one image a laughing mother squeezes her two daughters with a caption that reads:

“She raised us on her own. So when I graduated, I viewed it more as her accomplishment than mine.”

Next Stanton will travel to Africa visiting Uganda, Kenya and the Democratic Republic of Congo. He will also photograph in India and Vietnam.