Go Window-Shopping Through the Iron Curtain 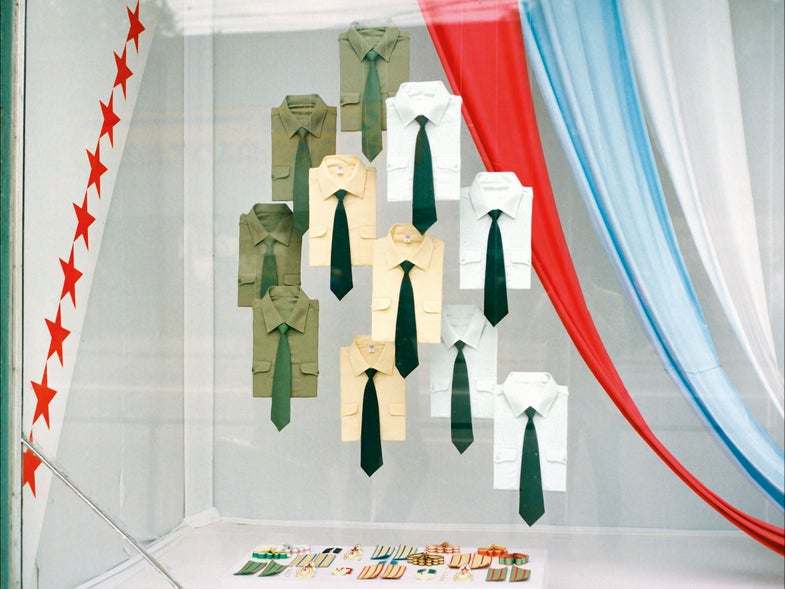 “It may have been that the shop windows were invisible to local photographers and much too quiet for Western journalists,” writes David Hlynsky. “I wasn’t either of those things; I became a walking man with an insatiable camera.”

At the twilight of the Soviet Era, from 1986-1990, Hlynsky, a photographer from the American Midwest, made some 8000 color exposures with his Hasselblad of shop windows and storefronts throughout the Eastern Bloc capitals. A selection of those are being published for the first time in his new book Window-Shopping Through the Iron Curtain (out this month from Thames & Hudson), some 25 years later amidst revived Russian aggression in Europe, and renewed interest in the East-West divide.

When he first arrived in Krakow in 1986, Hlynsky, who was raised in the McCarthy era at the peak of nuclear brinksmanship, was anticipating “cloak and dagger scenes of violent repression.” Embarrassed to admit it, he says, “a small boy inside me was still ready to teach those poor folks about American-style liberty.” But, considering the culture of violent repression in our own American South, it was ironic that all he encountered was “a kind of familiar, plodding banality.”

What bothered the West most about life in the Eastern Bloc, at least according to the party line, and the deeply entrenched stereotype that ensued, was not political, religions, or artistic repression. We had enough of that ourselves. Pity only really derived from the thought that the ‘poor folks’ had nothing to buy, nothing supposedly for which to shop.

“The banality of the shop windows,” Hlynsky says, was what “understored a real cultural difference between East and West.” The landscape lacked all the commercial glitz we’re bombard by here, and with that a particular urgency. No one was was selling you luxury, status, novelty, or fertility. There were no logos, no spokesmen, no brands, no consumer mythologies. Advertising under Socialism, as a direct inversion of our system, was meant to lower expectations, rather than inflate them. The windows, “were designed to showcase generic products with no frills,” he says. “A radio was a radio. Milk was milk. Meat was just meat.”

His simple, mediative images, to a Western-born viewer, might suggest—through their barrenness and crumbling facades—scarcity, indifference, decay. Like vitrines of a history gallery, they displayed the quagmire of bureaucratic inefficiency. “I saw these windows as a vast ad hoc museum of a great failing utopia,” Hlynsky says.

However, if we read the windows only on the surface, we risk missing the depth of their meaning. These shop windows revealed nowhere near what they obscured about the Socialist economy, so much of which operated in the shadows and alleyways through unauthorized hard currency exchanges. In reality, the best commodities ended up in the back rooms rather than the storefronts in anticipation of shortages. Advertising was replaced by rumor and gossip; currency supplanted by favors.

“Through chronic shortages and stockroom pilfering,” otherwise known as “strategic habits” of the Soviet consumer, a kind of “petty sabotage” of the system, “window-shopping in the East had been distilled to a survey of the leftovers,” Hlynsky says.

We know what capitalism has wrought in post-Soviet states, and what a tool of suppression and control consumer comforts have become under Putin’s brutal regime in Russia today. We know what catastrophic environmental consequences await us for our own move further to the right after the fall with unrestrained big box mass consumption, the scale of which has never existed. Might we now see these shop windows in a different light and hold them up as a mirror to reorient our habits?

“We’re perpetually unsatisfied,” he adds, “because our system is built on growth and if we don’t grow, if we don’t consume more next year, then we consider ourselves failing.” Which anticipates, if anything, all but certain environmental disaster. “Should we really be as proud of it as we are?”