The 2013 Pulitzer Prizes were announced this week, and it’s not a surprise that the winners for Breaking News and... 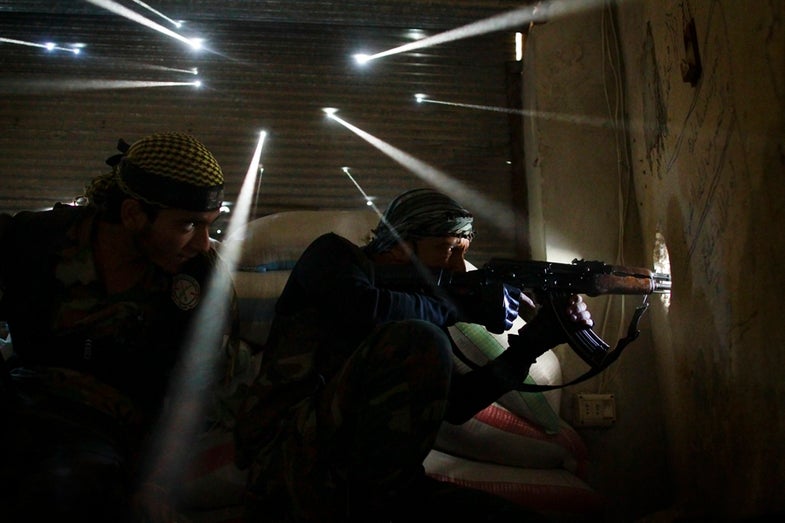 Two rebel soldiers stand guard in the Karmel Jabl neighborhood of Aleppo as over a dozen holes made by bullets and shrapnel peppered the tin wall behind them. The dust from more than one hundred days of shelling, bombing and firefights hung thick in the air around them as they took turns guarding their machine-gun nests. The precincts of Karmel Jabl and Al-Arqoob are strategically important because of their proximity to the main road that separates several of the main battlegrounds in the city, from one of the largest rebel-controlled regions in Aleppo. It is hard to know how many troops the regime has deployed along the Karmel Jabl / Al-Arqoob neighborhoods (considering that this region is one of many frontlines, most of them scattered along the Western and Southwestern sections of the city). Moreover, the popular belief is that if the regime ordered its infantry (most of it is largely composed of Sunni Muslims) to charge the rebels, a large number of the soldiers would defect to the opposition. For this reason, face-to-face combat is rare. Instead, the regime relies mostly on tanks, indirect fire (mortars and artillery), airplanes and snipers. Snipers can hold a line of several streets and can take weeks for the rebels to locate and neutralize them. Both sides (the Free Syria Army and the regime) rely heavily on snipers - the cat and mouse game of Aleppo's frontlines. Two regime snipers had closed several side streets keeping the rebel positions in check. As the Free Syria Army soldiers attempted to flank them (by punching holes on the walls of houses, both sides can travel several blocks from house to house without being seen by the opposing side - most importantly, without been spotted by the snipers), the regime forces reinforced their positions with tanks (which only move a few meters at a time, mostly under the cover of night in order to minimize their exposure to RPG's (rocket-propelled grenades). © Javier Manzano/AFP. Javier Manzano
SHARE

The 2013 Pulitzer Prizes were announced this week, and it’s not a surprise that the winners for Breaking News and Feature photography are sourced exclusively from what was probably the world’s most dangerous place in 2013: Syria.

Hoping to limit international exposure of their violent suppression of rebellion, the Syrian regime essentially stopped issuing press visas. That meant reporters had to find alternative means of access, putting themselves in greater personal danger in the process. For war photographers, the story’s going to be told, no matter how antagonistic the regime or risky the journey. And if you’ve been following our weekly photojournalism roundup, you know that they succeeded.

It’s not a huge surprise, then, that this year’s Feature award was given to a freelance photographer for the first time in 17 years—the challenge is especially appealing to those with no major affiliations. Javier Manzano’s image of rebel snipers holding a position in Aleppo as pins of light streamed through bullet holes in the wall was picked up by AFP during the 9 months he spent in Syria. It’s one of many singular shots—you can see the rest on his Shutterstock here.

But the major wires were on the ground too, of course, and doing equally amazing work. The Breaking News award also went to work from Syria by AP’s team: Rodrigo Abd, Manu Brabo, Narciso Contreras, Khalil Hamra and Muhammed Muheisen. Their ongoing coverage of the civil war and all its destruction. You can see a sampling of this work here.