In late 2013, a three year long battle between photographer Daniel Morel and Getty and AFP appeared to draw to... 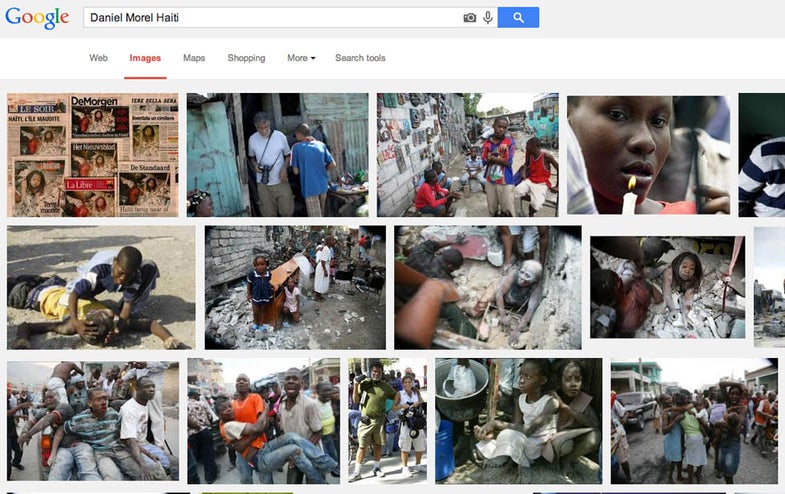 In late 2013, a three year long battle between photographer Daniel Morel and Getty and AFP appeared to draw to a close, when a judge awarded Morel $1.2 million in damages for both agencies widely using his photographs of the 2010 Haiti earthquake without permission. However, the two news organizations are now appealing the ruling, adding yet another wrinkle to the long-running case.

In 2010, Morel was one of the first on the scene of the Haiti earthquakes, capturing a number of early images of the disaster, which went on to win him a 2011 World Press Photo award. However, soon after he took the photos and uploaded them to TwitPic, they were rehosted on Twitter by someone else, at which point they were picked up and run by AFP and Getty. From there, they were spread to the Washington Post, CBS, ABC, and others — all of whom settled with Morel out of court. However, AFP and Getty, opted for a court battle instead.

Perhaps the most galling side of the story is that after Morel first objected to the misuse of his images, AFP filed a countersuit against the photographer, claiming instead that “that the agency had not infringed upon his copyright and that instead he was interfering with its business practices,” according to the New York Times. They claimed that Twitter’s terms of service allowed them to re-use the images, though this argument was quickly dismissed.

In January, a judge ruled in Morel’s favor, and in September a jury awarded the maximum possible damages of $1.22 million, some $275,000 for each of the eight infringed images — 1,000 times what the defense had requested.

Now, and perhaps unsurprisingly, AFP and Getty are appealing the ruling, calling it “a miscarriage of justice,” and claiming their actions were not willful, and the infringement was accidental. This goes against the initial rulings, which found that the agencies had quickly known the images were Morel’s, but still distributed them for weeks under the name of the person who originally stole the images. If a new ruling finds the infringement was not willful, the awarded damages will drop significantly.

In this case, there’s no doubt that Morel’s images were used improperly, and without the proper checks made for attribution, which saw his photographs used by some of the largest media bodies on the planet without him being paid or acknowledged. The battle comes down to if AFP and Getty did so intentionally or not.