Writer Esther Honig has undertaken an intriguing look at world standards of beauty, and the way that women’s images are … Continued 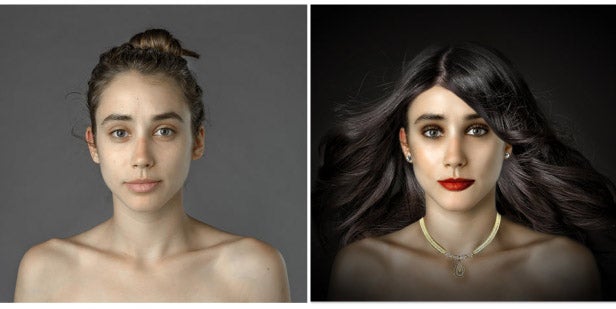 Writer Esther Honig has undertaken an intriguing look at world standards of beauty, and the way that women’s images are often modified to meet them. For the last few years, we’ve seen a considerable amount of criticism of heavy use of photo retouching with images of women—but it’s not according to a universal esthetic. From country to country, beauty standards can change substantially, and Honig set about to examine that by having her image retouched by Photoshoppers around the globe.

Using the freelance hiring service Fiverr, which allows you to contract a digital service for $5+, she sent her image to 40 individuals in 25 countries, some amateurs, some professionals, from Australia to Kenya to the Philippines. She called the project Before & After, and, as she puts it, “

They are intriguing and insightful in their own right; each one is a reflection of both the personal and cultural concepts of beauty that pertain to their creator. Photoshop allows us to achieve our unobtainable standards of beauty, but when we compare those standards on a global scale, achieving the ideal remains all the more illusive.”

You can see a big roundup of the images at Buzzfeed, and there’s definitely a mix of local standards of beauty and the skill of the artist. In some cases, most obviously Morocco but in many others too, there are definite tweaks that you could align with a local style. But many of the images are far more the product of the retoucher’s skill. While the Ukranian and Venezualan ones seems to have been done with a very light touch, those from the USA, Australia, and Philippines are pretty remarkably dreadful.

It’s hard to pick apart which of these alterations were directly based on a local standard of beauty, and which based on the amount of time, effort, and skill the retoucher was able to impart—it would be a fascinating experiment to see repeated with professional level retouchers only. But no matter how you look at it, it’s an intriguing look into what $5 will do for your portrait.