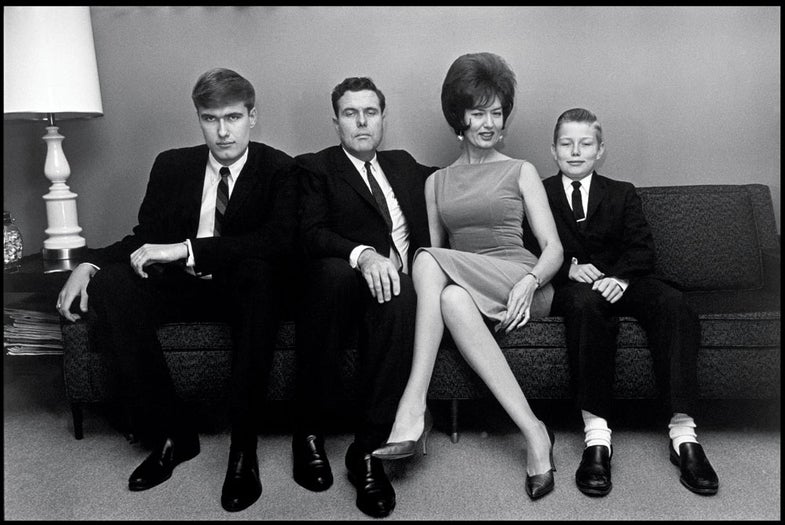 Step off Central Park West and into Elliott Erwitt’s ground-floor studio and you’re struck immediately by the breadth of his success. Hanging on the walls and in the pages of his many books are iconic images that span all genres: black-and-white photojournalism from the pages of Life magazine, celebrity portraits that capture the likes of Marilyn Monroe and a young Arnold Schwarzenegger, and of course his signature dog photos.

Erwitt, dressed in a red Shanghai Tang jacket, is sorting through images as I enter his expansive workroom. He’s just returned from Hong Kong—hence the jacket—and soon leaves for Kuala Lumpur. At age 86, he works hard and consistently, putting together books, shooting assignments, and making appearances for exhibitions. A collection of his color work, appropriately titled Kolor (teNeues), was published last fall. And a large journalistic-style commission for the Macallan Distillers has just been made into a book that accompanies a limited-edition bottle of the high-end single-malt Scotch.

Born in Paris and raised in Italy, Erwitt came to the United States in 1939, first settled in New York, moved to Los Angeles, and began shooting weddings at age 16—right around the time his father took off and left young Elliott to fend for himself. Following a two-year stint in the military, where he shot for the Army and for various wire services, Erwitt was scooped up by the Magnum photo agency at the invitation of Robert Capa. That was in the mid-1950s, and he’s been there ever since.

Erwitt can be wildly modest, incredibly aloof, and apparently uninterested in speaking about his work, but that didn’t stop us from trying to tease out some insight into his long and successful career. Beyond still photos, he has shot a number of documentaries (including one on Dustin Hoffman and another about a nudist colony), done camera work for the Maysles Brothers’ Gimme Shelter, and contributed to Martin Scorcese’s Bob Dylan documentary No Direction Home.

He’s long managed to juggle a roster of work that mixes the editorial, the commercial, and the personal. It can be hard to keep track. “I was not familiar with Elliott’s photos from the 1940s and ’50s; I was more familiar with Dog Days and things like that,” says Brian Wallis, the chief curator of the International Center of Photography, which mounted an Erwitt retrospective in 2011. “His early work is so lyrical and sensitive and subtle. It was a revelation for me. That he would become a journalist and take on the challenges of assignments is impressive. He does so many different things with so much skill and grace and a seeming effortlessness that is very deceptive.”

For a photographer in his eighties who’s put out dozens of books, still maintains a slate of commercial clients (including Jacob Cohen, Artemide, and Lavazza), and continues to shoot his crowd-pleasing dog photos, the Leica-wielding Erwitt reflects on it all with little more than a shrug. When he describes the making of photos as “just composing all the parts in a rectangle,” it’s more than likely that this highly skilled master isn’t just being self-effacing. Wallis remembers the sole color image in the ICP retrospective: “It was a photo of Obama’s [first] inauguration. Elliott told me that he walked into the room, took that one picture, and left.” There were no back-up shots, no working the scene, no hanging out just to see what else might unfold. “What’s unbelievable,” says Wallis, “is his ability to represent these fleeting moments time and time again. He gets once-in-a-lifetime photos with such regularity. It’s astounding.”

Nice jacket. Were you just in Hong Kong? I was traveling, doing interviews for the Macallan project. In each place, we had an exhibition with photos from the book. The receptions were very nice. Some of the questions [from reporters] were rather stupid. In Moscow, there were 500 journalists—supposed journalists. Three or four of them were intelligent. One asked if I was there when the pictures were taken. I replied, “Probably.”

Did you expect your career to thrive for so many years?
I’ve always been busy. That’s how I support my four ex-wives and eight-and-a-half grandchildren.

You’ve shot such a broad range of subjects, but many people know you for your dog pictures. How did you get so into photographing dogs?
It’s simple. I like dogs. They’re nice and they don’t ask for prints. They’re everywhere and we bark a common language. I’ve done eight books on dogs and had a dog until recently. I had him for 17 years. He went to heaven.

Are you shooting mostly digital or film these days? Both. Digital is more convenient. But I like film. People like digital because you’re finished up on the day that you shoot. You have the results. For advertising people, digital is safer, more convenient, and cheaper.

But… But I am used to film and I like it better. I like the results better.

Is there something psychological about not seeing the picture and letting things progress more organically?
I don’t look at the digital images as I’m going. I just use the first in the same way that I would use a Polaroid, making sure that the light is right. Last time I did digital was a shoe piece for Town & Country and a fashion job for Jacob Cohen.

What’s the most recent commercial job in which you were really happy with the outcome and you figured that you would have done that job for yourself?
I would never have done a commercial job for myself. So that takes care of that. But what job did I like best? The Scotland book [for Macallan] was a good one. I got hired to take pictures in Scotland of anything I wanted. It started out as a 10-day job. I liked it, and made three trips. They were hysterically happy to send me back. They wanted me to do whatever I wanted to do.

How did that work, in terms of what you shot?
I went to the main cities and the countryside and to whisky producers. It’s all pretty obvious. They’re a whisky company. It’s not a brain challenge. I hired a car, went around, met people.

Do any particular images stand out? We went on a hunt. There’s a day of the year that is the opening of the grouse-shooting season and we went with a bunch of grouse-shooting people. This gets taken very seriously. It was very interesting. Eating the birds afterward was not so interesting. You can break your teeth on the pellets that are still in the birds. Freshly killed grouse is an acquired taste. Scottish cooking is not the best.

What made you decide to do your most recent book, Kolor? The designer I work with thought there was a book in there. I didn’t agree. But we started looking through the material, and after a year I thought there was enough. I got kind of talked into it.

The cover is that great, iconic picture of yours from the set of The Misfits, with Marilyn Monroe and Montgomery Clift. What comes to mind when you look at it now? It’s just a picture of people in a movie. It may be interesting because they all died after the movie came out and they’re famous. Shooting famous people and non-famous people is pretty much the same thing, except that famous people sell. Very often the non-famous person is the better photo, but if you want to have your work sold, it’s better to stick with famous people.

You obviously prefer shooting black-and-white over color. Why? It looks better. I have more control and everything is out of my darkroom. I work with a printer and supervise everything. I was surprised. I never thought much about color, but looking at it, the color is pretty good. The color is mostly for assignment—ads or journalism. When I take pictures for my own amusement, it’s black and white. I prefer that for personal work. For professional work, I don’t care.

Is there a new book in the offing?
Right now I am working on my next book, images of women. It’s a big project. I look through my contact sheets, I make work prints, and I see what can be put together.

What is a typical day like for you?
When I’m here, a typical day is to get up in the morning, go through my archives and look for images. I’m just at the beginning of the women book. I’m going through 60 years of work, so I don’t know that much yet, but I did find some stuff that’s good.

Can you tell me about what you found? Some pictures.

Can you say what they are or tell me how you felt when you saw them?
How can I describe a picture? You look through your stuff, you find some good pictures, you print them. What’s there to describe? You have to see the pictures.

Can I see them?
No. No! I’m at the beginning of a huge thing. I’m just making contact sheets.

How did you come up with the idea for Sequentially Yours [which shows photographs of Erwitt’s plus the ones that preceded and followed]?
That’s a strange question. I just thought of it. I look through my work. That’s my alphabet. It’s like with Kolor. That book was never meant to be. But I warmed to it.

What convinced you that it would work?
Pardon?

How come?
I think that the work is what it’s about. I hope that the work is what it’s about. You ask me what makes me do the Kolor book. It’s because I thought it was a good idea. Maybe it’s not a great idea. I just think you have all this material, you just look at the material, and maybe you decide if it’s worthy or not. If it is, you do it. If it’s not you drop it.

How quickly can you tell whether or not it will work? How long is a piece of string? I hope that the one I’m working on now will work. If it doesn’t, I’ll do another collection. Or maybe shoot something new if I have the energy.

Is there anything you are looking forward to shooting? At the moment, no. I’m tired. After this trip to Kuala Lumpur, I am going to vegetate for a while.

And figure out what to do next? I’ll go to my house in the country and probably fish.

You’re into fishing? I’ve never done it. But I might try it. I hear that they have fish up there.