The Dakar Rally, one of the most extreme events in motorsports, started as a mad race from France to Senegal.... 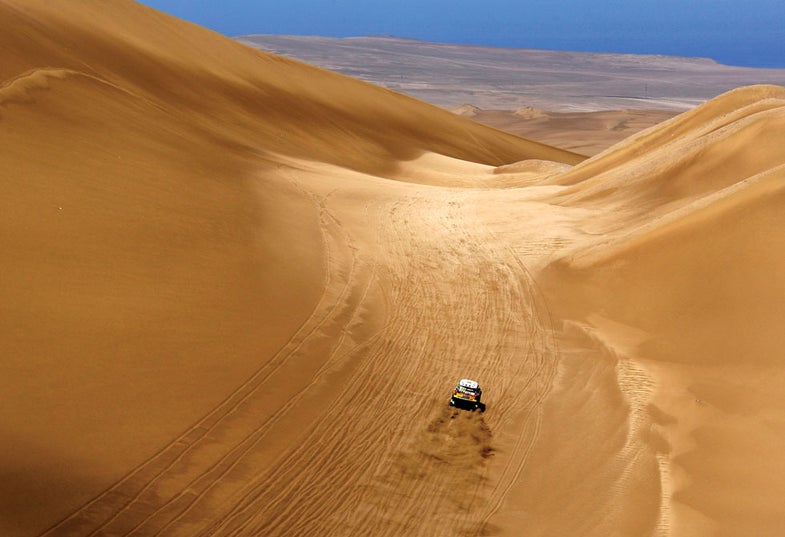 The Dakar Rally, one of the most extreme events in motorsports, started as a mad race from France to Senegal. In 2009 the event’s organizers decided the race was dangerous enough without navigating Africa’s security perils (a driver blew off his left foot after hitting a land mine in 2001). They kept the name, but moved the race to the less politically volatile climes of South America.

Buried ordnance aside, though, the move hasn’t made the course any more forgiving, unfolding as it does through treacherous desert, mountain and jungle terrain. Hundreds of drivers astride motorcycles, purpose-built rally cars, quads and trucks vie to be the first to complete the wallet- and spirit-draining 5,157-mile circuit. This past January, the course took drivers through Argentina, Chilé and, for the first time, Peru. There were 443 vehicles at the starting line; 249 made it to the end.

Why subject yourself to such a difficult, even deadly ordeal? Because it’s a difficult, deadly ordeal. These men and women thrive on the terror and joy that comes from pushing their abilities to the limit across a changing and unpredictable landscape. “On a very quick bend,” said bike racer Joan Barreda Bort, “where I was at 120 kph, I hit a stone with my foot and I thought that the impact had torn my leg off. When I arrived at the refueling zone, I took some painkillers and it was OK.”

Even with buckets of money and the best laid plans on your side, Dakar holds more challenge than most can withstand. Even American NASCAR driver Robby Gordon, who outdrove many competitors this year, suffered too many breakdowns (as well as a technical penalty regarding a tire inflation system) that left his race-hardened Hummer in fifth place overall. The winners? Two French racers, Stéphane Peterhansel and Jean-Paul Cottret, who crossed the finish line in a Mini. Yes, a Mini. Thus is the roughneck splendor of Dakar. Strategies may shift, but its unpredictability never changes. AP