Can you spot the women in these photos? 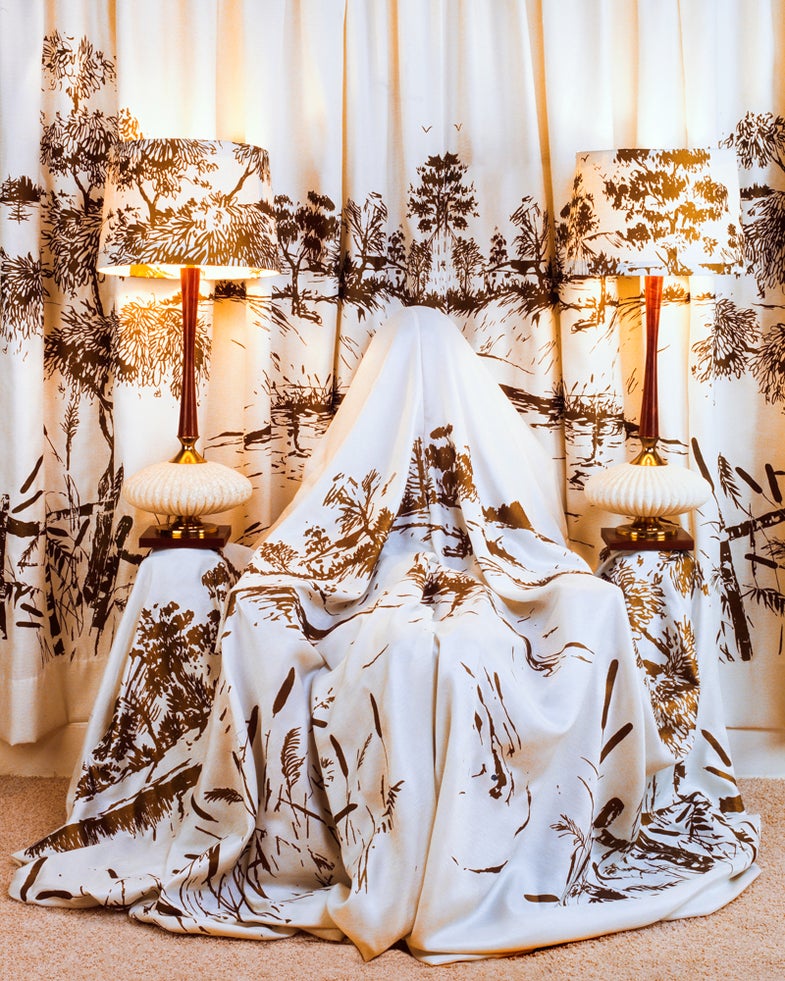 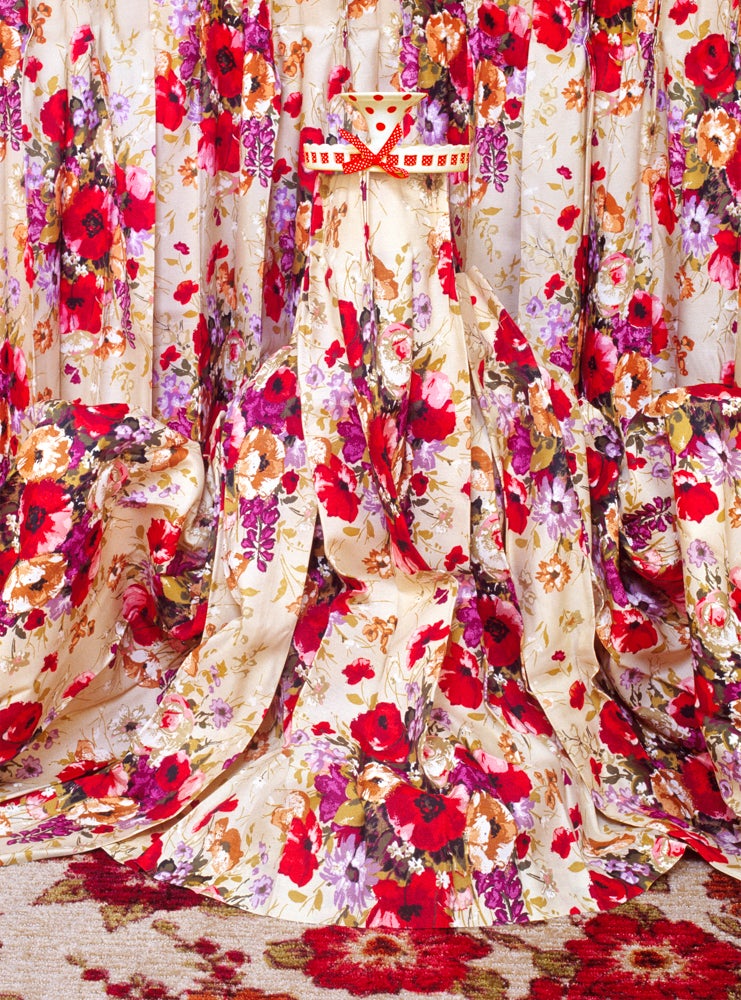 In her new photo book Anonymous Women, artist Patty Carroll mixes in several quotes from writers who provide pithy counterpoints to the vividly provocative imagery. Most of these have been contributed by friends and admirers of the project. The book’s epigraph, however, comes from the pen of Virginia Woolf: “For most of history, Anonymous was a woman.”

Carroll’s elaborate mise-en-scènes explore the mysteries and complexities of femininity and domestic life. “Home is a myth,” Carroll writes in her afterword. “Home is comfort, the most familiar place you can go. Home is also where personal psycho-dramas play out.”

Created over two decades, Carroll’s images depict women in various phases of anonymity: the partial obscurement of her models in the mini-series Heads; their envelopment by fabrics in Draped; their peek-a-boo hiding among accoutrements in Reconstructed; their fate of smothering within their own stuff in Demise. “The photographs comment on obsession with excessive collecting, accumulating, designing and decorating,” Carroll says. “I wanted the woman to be part of her ‘stuff,’ which creates her identity while simultaneously overwhelming and obscuring her.”

Images from Anonymous Women have been shown in exhibitions around the world, including a current show at Wright Gallery at Texas A&M University in College Station through March 16. The monograph from Daylight Books represents the most complete collection to date. Here Carroll shares the intents and methods behind her dazzling photo series. 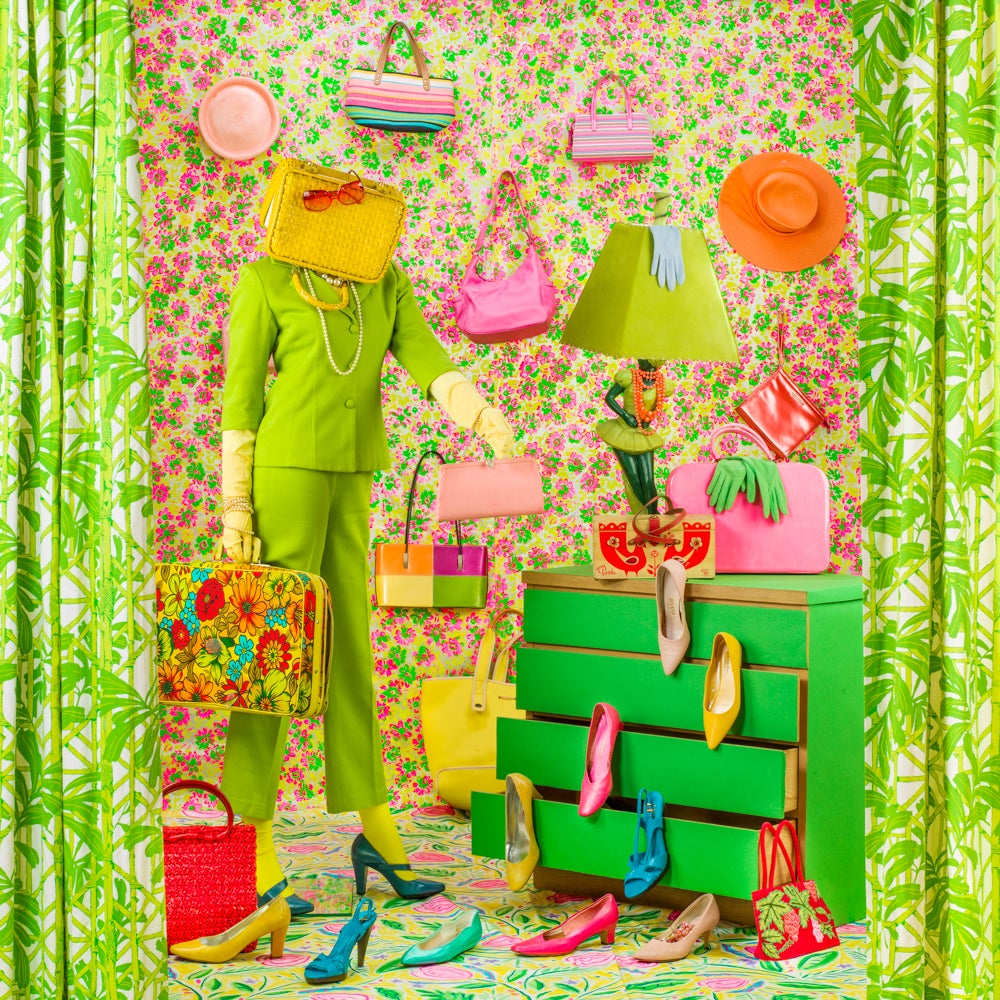 What was the inspiration for Anonymous Women? When did you decide to do this project?

Well it came about because I was living in England. My husband and I had moved to London in the mid-’90s for his job [as director of the Royal College of Art]—and I was teaching too—and it was very difficult for me. My fine-art work up until then had been based on American culture, and suddenly I was cast into this world that I knew nothing about. And I was known as Mrs. Jones—people did not call me Patty Carroll—and I had no background there; I didn’t know people; I had to reestablish my life. So I felt literally anonymous and almost lost. I was having sort of an identity crisis. So the first part of the series, Heads, was a response to that. 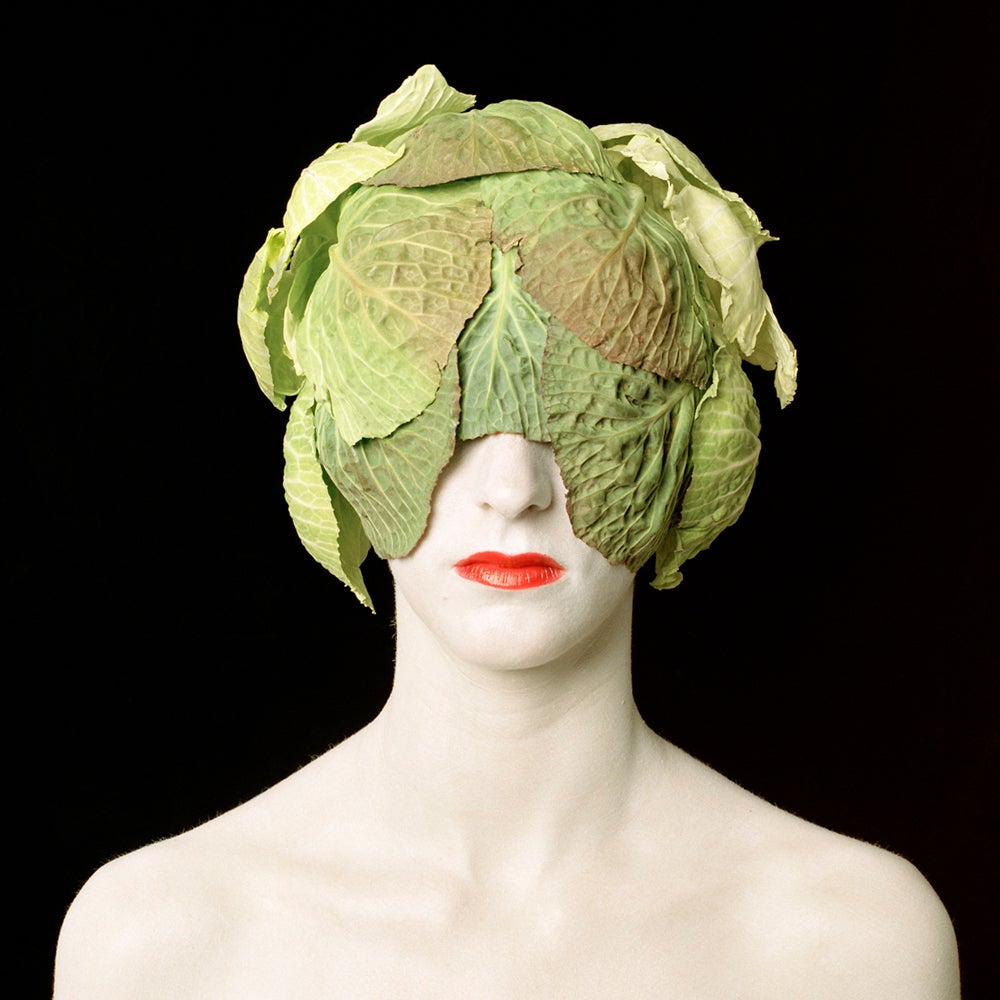 Still, it must be an adventure, almost liberating in some ways, to be anonymous like that, wasn’t it?

Yes, it certainly started a whole life for me. This is a strange leap, but when you look at women who are fully covered with a burka or whatever, they are sort of invisible. We in the West often think, “How terrible, they’re so repressed, et cetera,” but in some ways it’s very safe and comforting to not have people not know who you are on the street and not to have to deal with that. So there’s something about it that’s liberating, that allows you to do whatever you want, because no one’s ever going to know! You can sort of slip through the cracks. 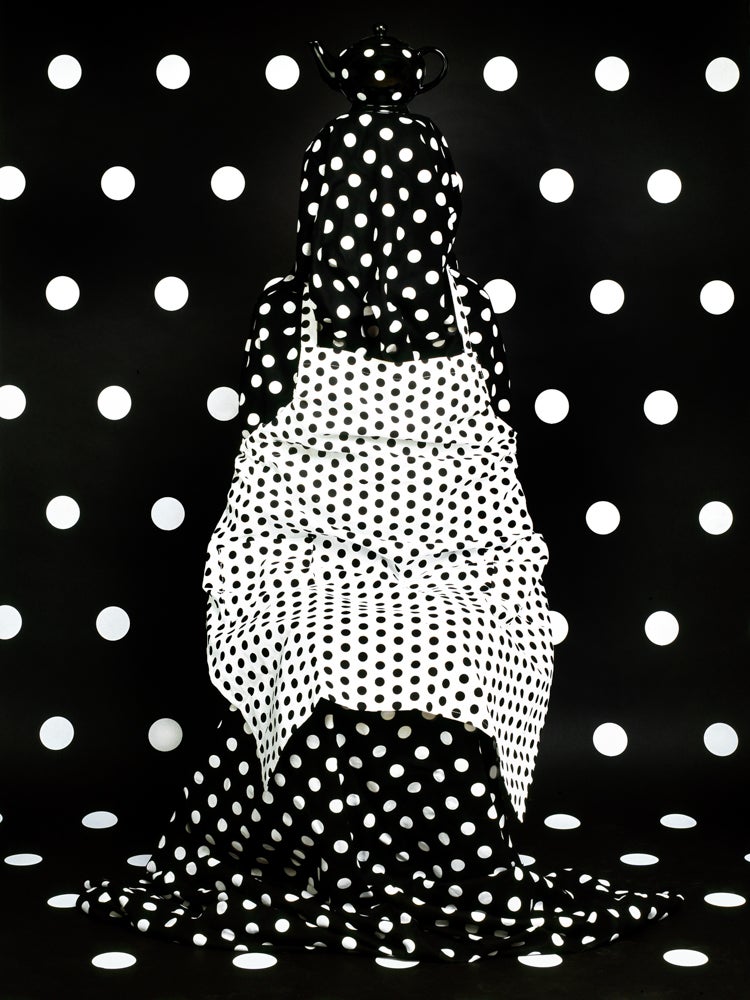 It’s like a mask. The cultural aspect of the burka seems to tie in with this work, especially the Draped series. Was that on your mind? As a metaphorical item?

On some level, yes. But mostly my influences really had to do with my own world. I went to Catholic school for twelve years, and I was taught by nuns who wore habits. And that kind of covering almost does the same thing, because with nuns as teachers, you never really know them. Sister Mary Agnes: You never know what her real name was or what her family was like or anything about her. You only know her as Sister Mary Agnes and she’s always in that habit, and there’s this kind of leveling of identity that goes with wearing all that cloth and covering up everything. 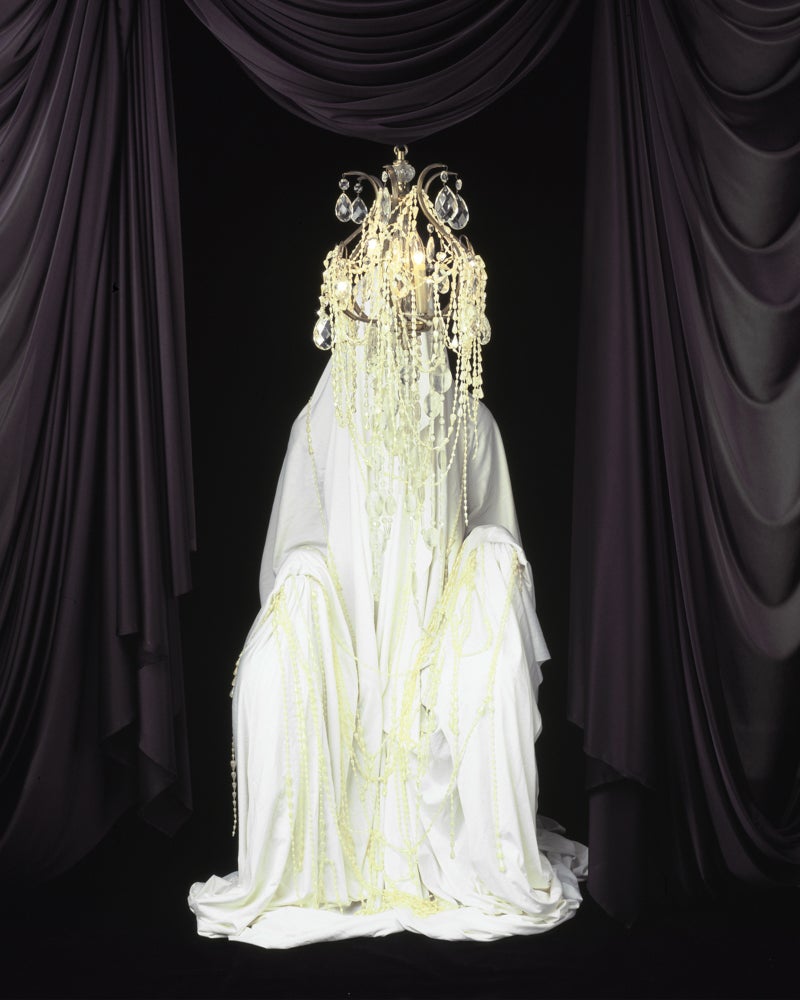 When I started the Draped series, we were furnishing a new house and that was part of it. At the same time my niece was deployed to Iraq, in the Marine Corps as a logistics officer. It was right at the beginning of the [2002] war in Iraq. I was completely scared and worried for her. It was ironic that a woman, my god-daughter, was in a group going to this foreign place. I started thinking about the women there, and how I was building this home and making it perfect and kind of obsessing about it—and these women were now going to have no homes. Their lives were going to be destroyed by this war around them. So home, not just as a metaphor but as a physical place of comfort and safety, was going to be very suspect. I did think about women who were wearing burkas and living in a more traditional society. That’s how the drapery work fit in. 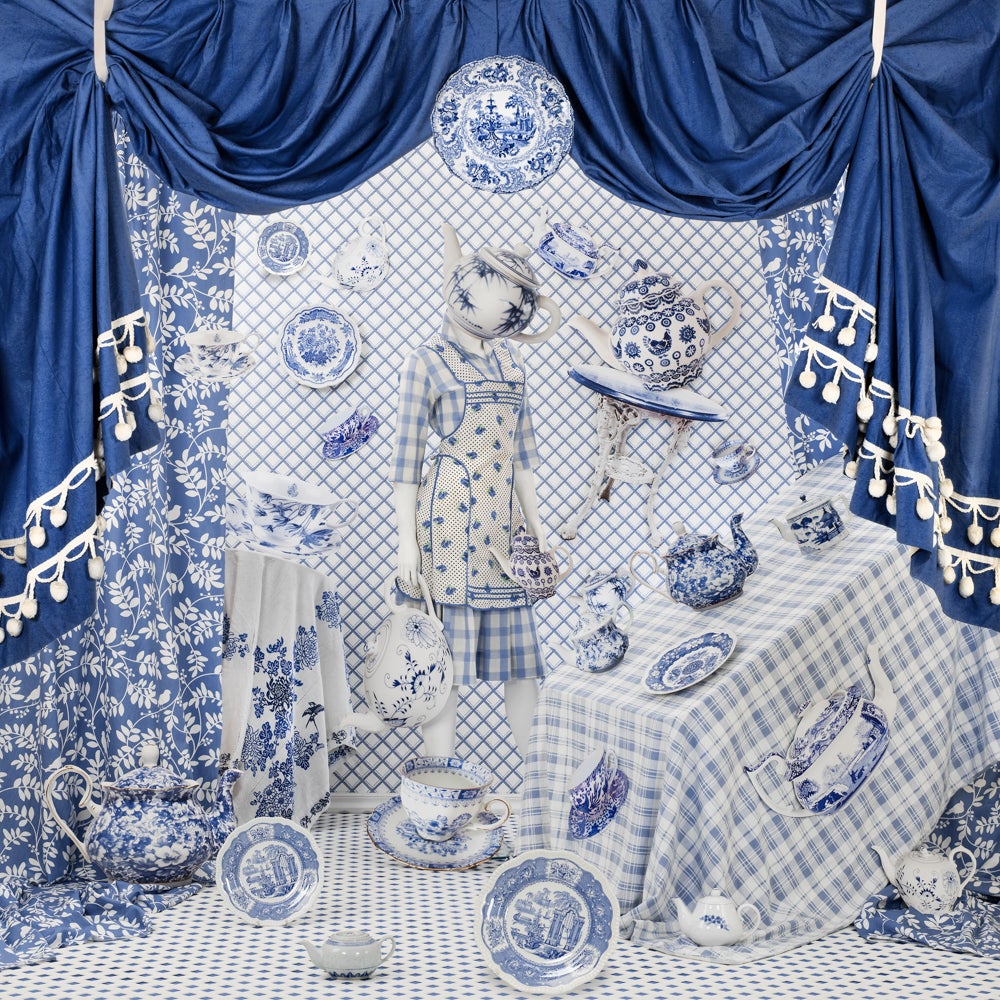 These pictures are all about the sets. You must spend lots of time on them—that’s a big process in and of itself…

You got it! The Heads series started out simple, with a model with something on her head, and we painted her white. Then in Draped there is a woman camouflaged, either in a pattern or maybe with one or two props, and fabric and drapery surrounding her. And then the next series, Reconstructed, involves building a set that’s eight by eight feet, sometimes with walls on the sides. And it became more about the stuff, because a lot of women don’t just identify their homes as part of their identity, but also their collections. Some women collect art, others collect plates or little ceramic thingies, all kinds of stuff. Everyone has their own collection of something. So this is both a critique of that as well as a celebration of it, with I hope some humor in there. 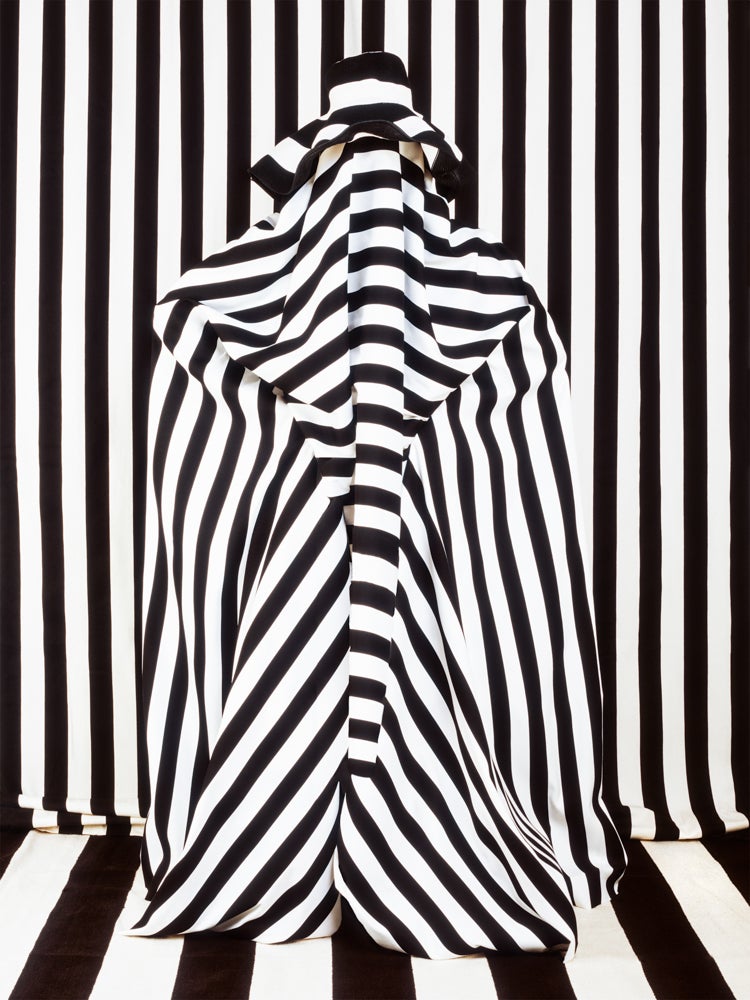 How do you find all this stuff? Do you spend a lot of time in flea markets and junk shops?

Yes, you name it. I cull thrift stores or antique stores or flea markets, all kinds of places. So we get an idea for a picture, and then I have to accumulate the stuff. Sometimes I’ll have part of it. Now I have enough drapery and fabric and knick-knacks that we can often re-use something in the next set. There’s a little bit of recycling, but mostly it’s accumulating more stuff. 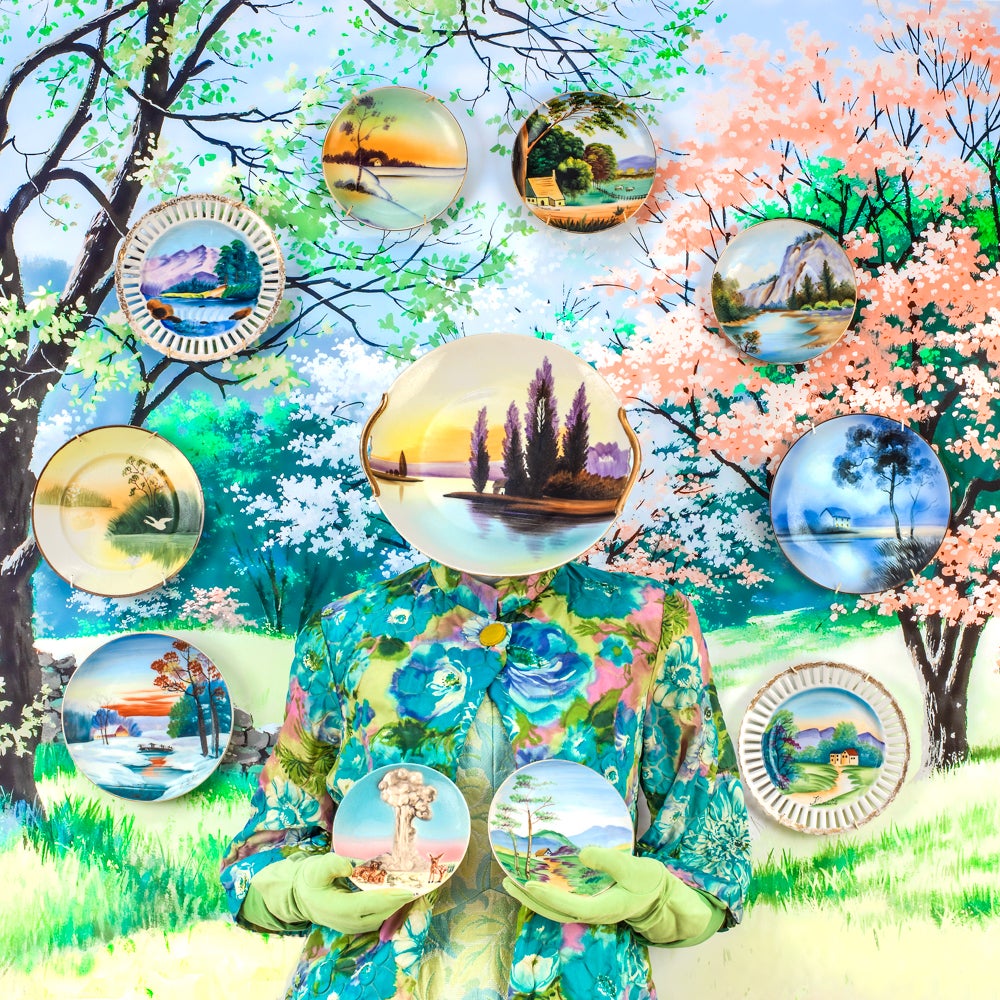 So you get an idea—say, “I want all these telephones hanging around the frame”—and go to work on it?

Well, in that particular case with the telephone picture: I was awarded a studio in Kansas City, because my husband has taken a job there [at the Kansas City Art Institute]. Now I’m back and forth between our home in Chicago and Kansas City. In Kansas City, the artist who runs my studio is a collector. One day I noted his pile of telephones and he said, “Oh I’ve got tons of them.” I said, “Can I borrow these?” So sometimes it’s just serendipity like that. I got a bunch of garbage bags and dragged them back to my studio in Chicago. 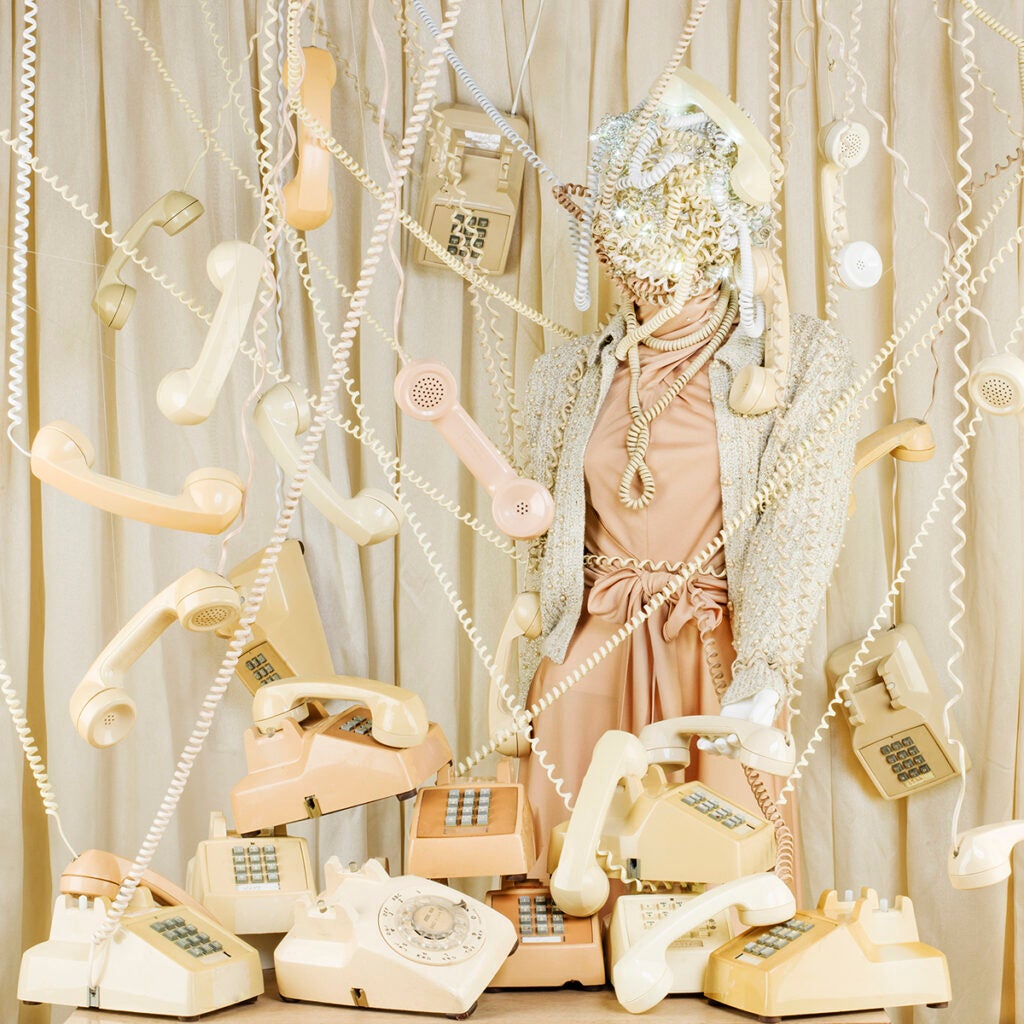 These are shot in your studio and you bring the stuff in? What’s your gear?

Yes, exactly. I use medium-format [2×2 on a tripod with an 80mm lens]. When I started out doing Heads and Draped, I had a Hasselblad film camera and I was scanning the film. But I finally bought a digital Hasselblad. And I use a lot of big studio strobes. 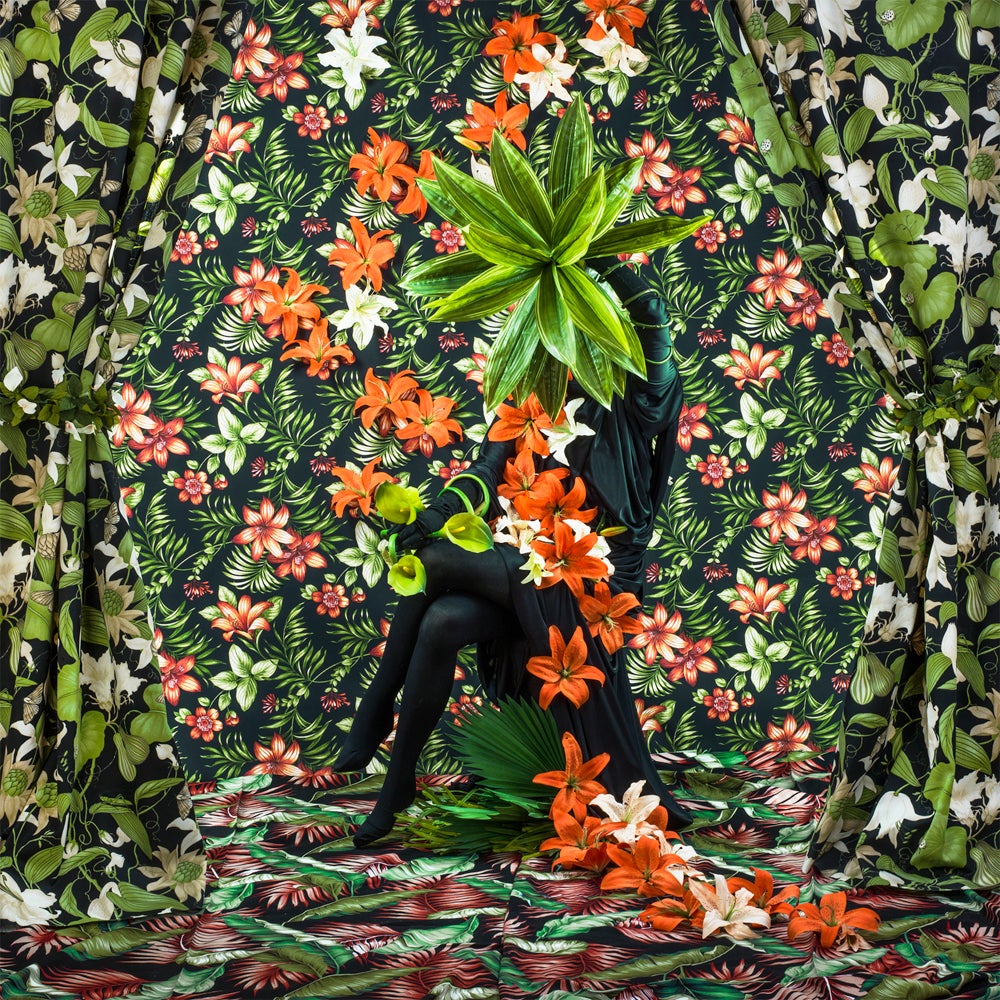 What about the models—are they different women?

In the Reconstructed series where it’s all about the stuff, we use a mannequin. But in Draped, it’s always a woman behind there. It’s just depended on who was around, either one of my assistants or a model. When I started making videos of them, we hired a woman who is a dancer, because she was able to move in certain ways and take direction over and over and hold poses.

I’ve had several shows of this work in China—they love it for some reason—and at the introduction to one show in Shanghai, these people kept asking, “Who is under the drapes?” And I said, “It doesn’t matter—it could be any of us. The whole point is, she stands in for all of us.” And they were like, “We know all of that, but who is it really?” So I just told everyone it’s Meryl Streep. And that ended it! 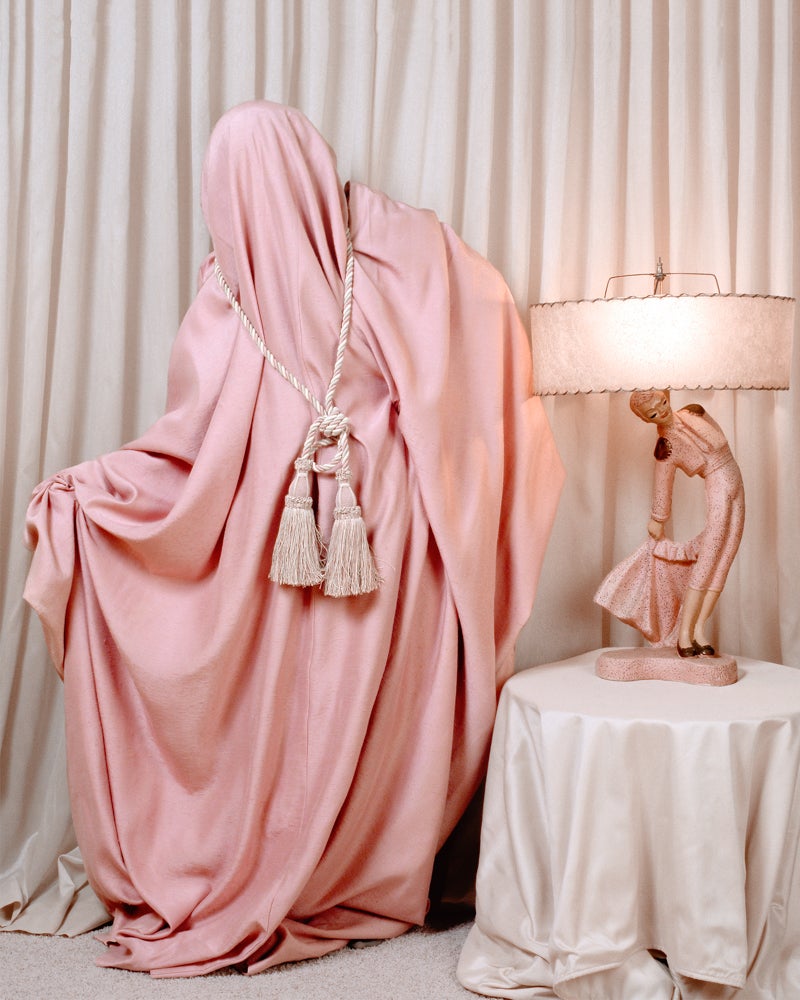 Yeah, exactly. It’s whoever you want it to be. Now I’m killing her off, by the way. I’m trying to end the series but I’m doing it by killing her off, where she’s reaching her own demise through her own stuff and activities. This is the Demise section. 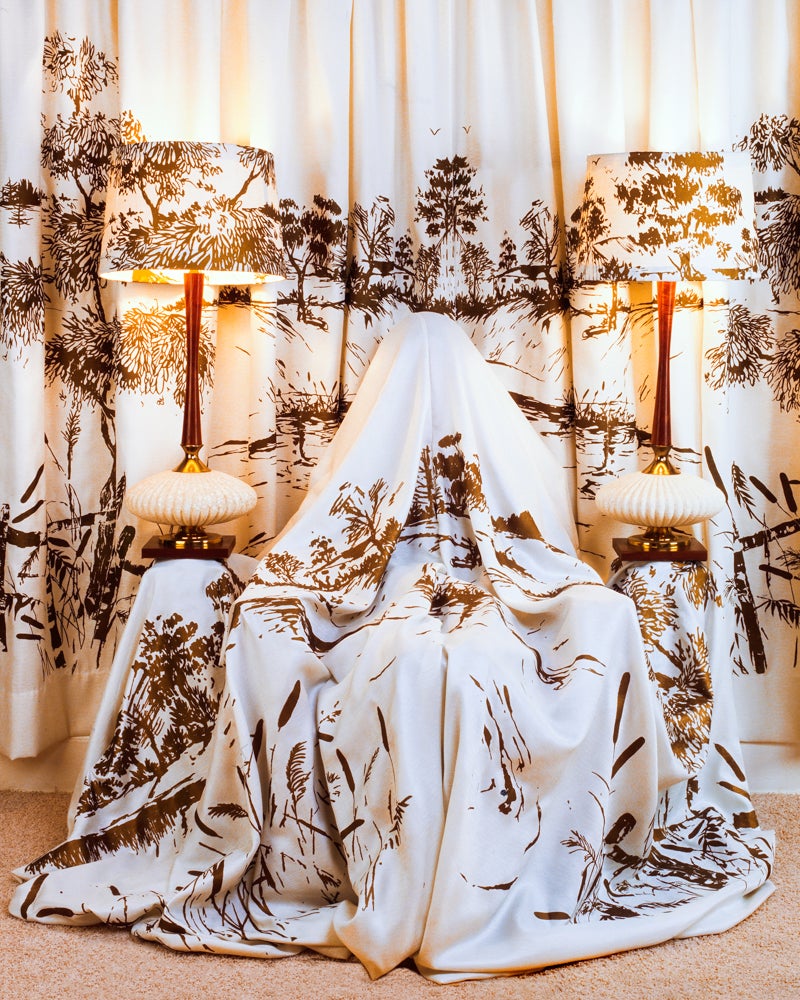 Does this mean the series will end?

Well, one hopes at some point! In the meantime I have started some other still lifes in Kansas City, so I have two projects going on at the same time. We’ll see how this goes. When I started killing her off, it came naturally, but I also started thinking about the game of Clue and how each room has a certain meaning in that game. And of course there’s the different objects that people get killed by. So we’re kind of loosely going through the rooms. But in this case, it’s really her own stuff that’s killing her. It’s the stuff in her home and her own obsession with it.

So while much of this work is humorous and decorative, it has some heavy underpinnings.

Right. You know, we are all smothered by our own stuff, on a level. 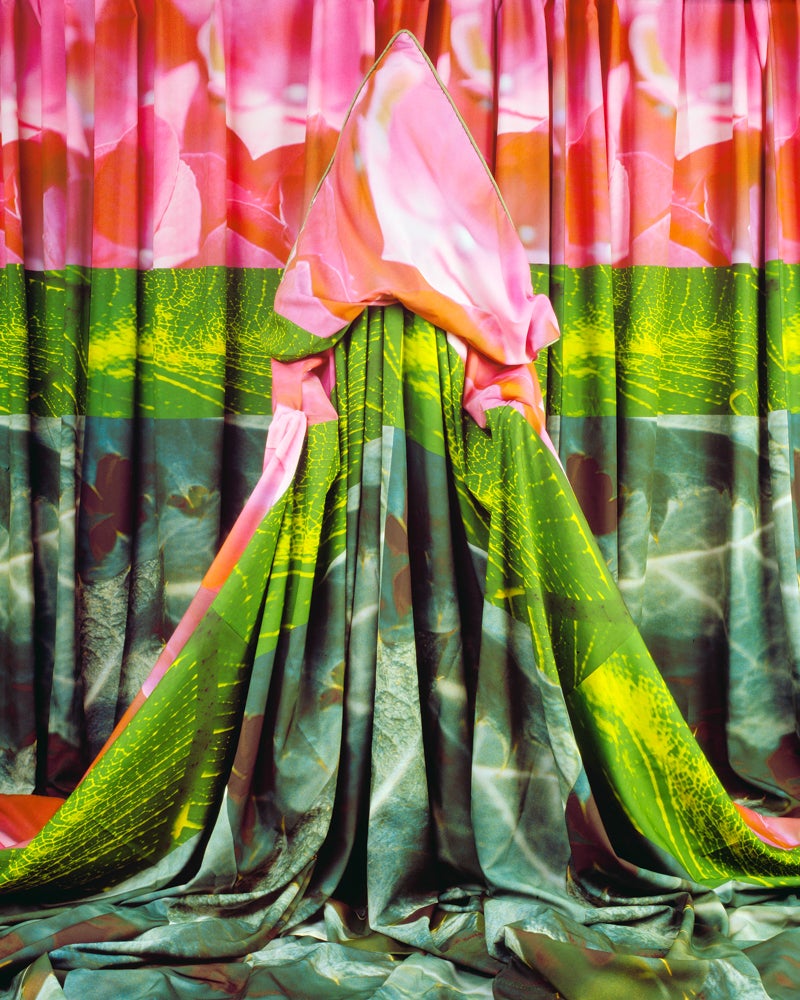 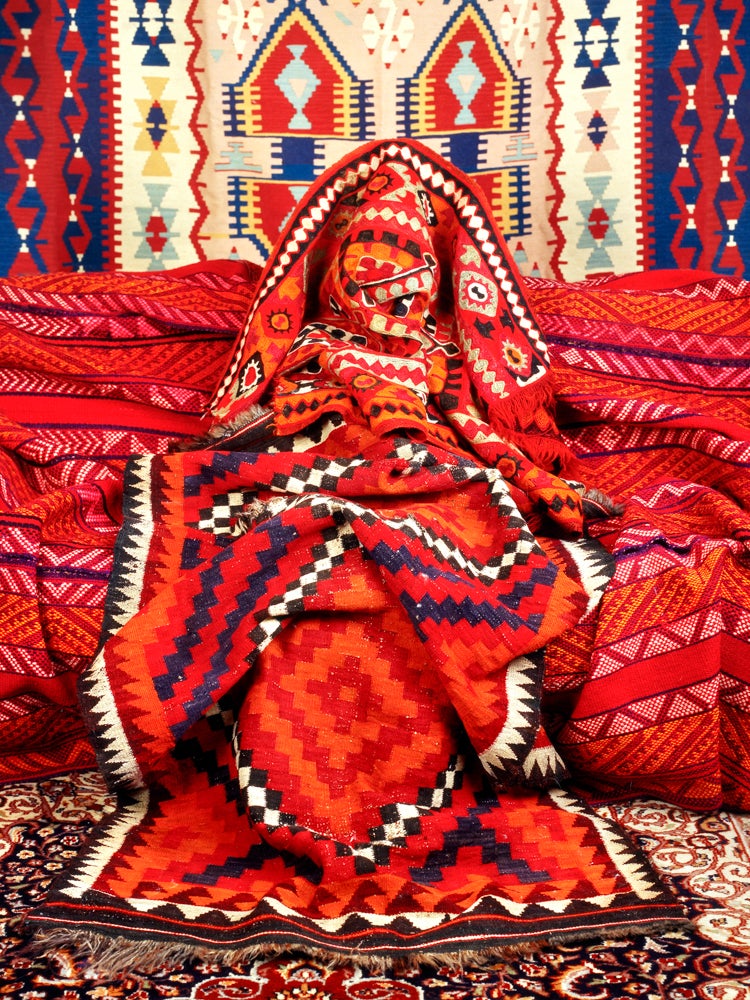 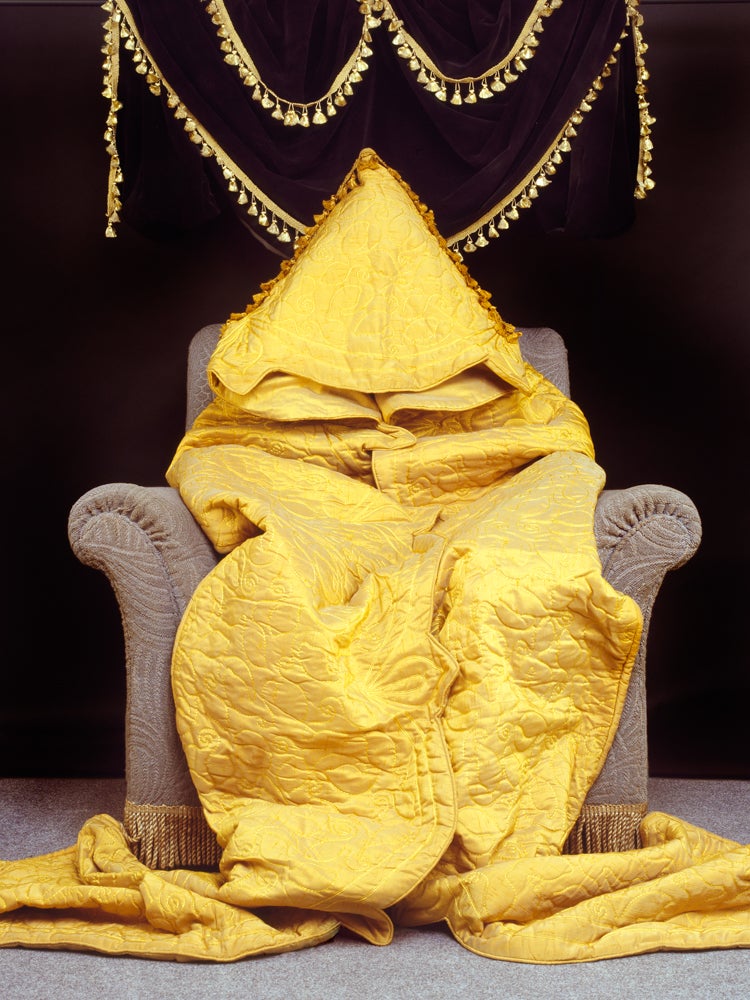 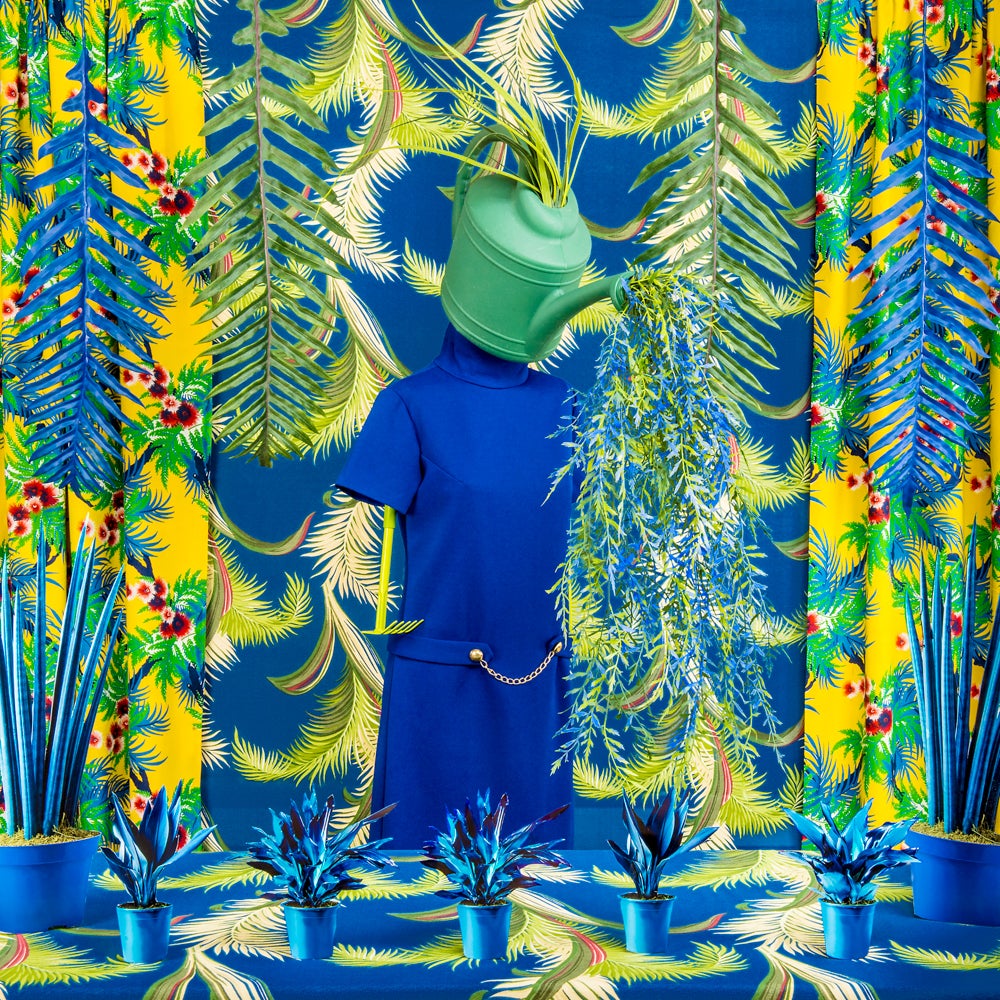