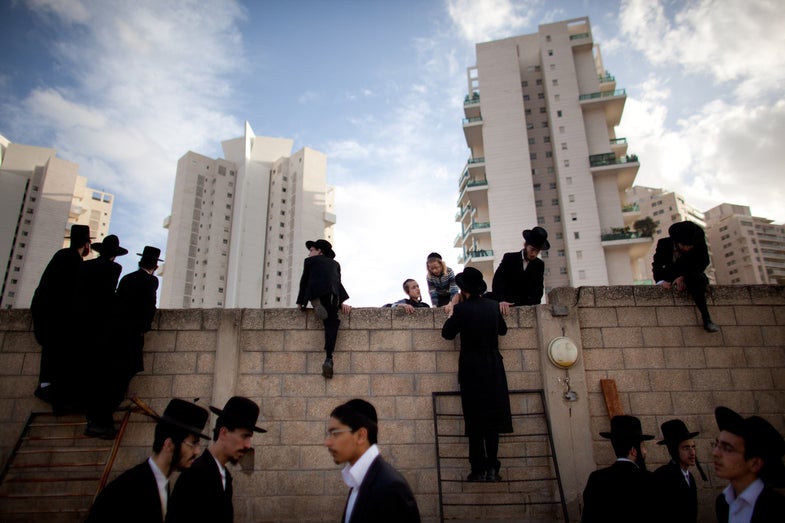 BNEI BRAK, ISRAEL - MARCH 14: (ISRAEL OUT) Thousands of ultra-Orthodox Jews of the Vizhnitz Hasidic dynasty stand on ladders as they follow the funeral procession of their rabbi Moshe Yhoshua Hager's body wrapped in a prayer Shawl before his funeral on March 14, 2012 in Bnei Brak, Israel. Rabbi Moshe Yehoshua Hager, who was the head of Israel's second largest Hasidic community, died aged 95 and was buried beside his father's grave in the Tel Aviv suburb of Brei . (Photo by Uriel Sinai/Getty Images). Uriel Sinai
SHARE 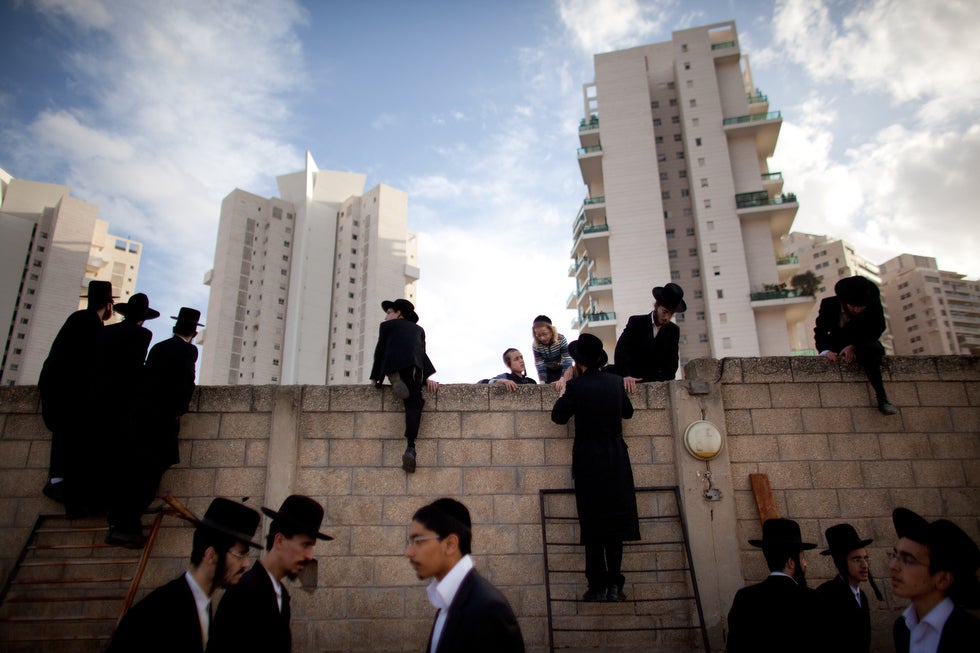 Photographer Uriel Sinai captured this image of ultra-Orthodox Jews attending the funeral of Rabbi Moshe Yehoshua Hager in Bei Brak, Isreal. Hager, who died at the age of 95-years-old, was the head of Israel’s second largest Hasidic community. Sinai, who is a stringer for Getty, recently won first prize in the annual World Press Photo contest for his work in the region. You can see more of Sinai’s images on his Website. 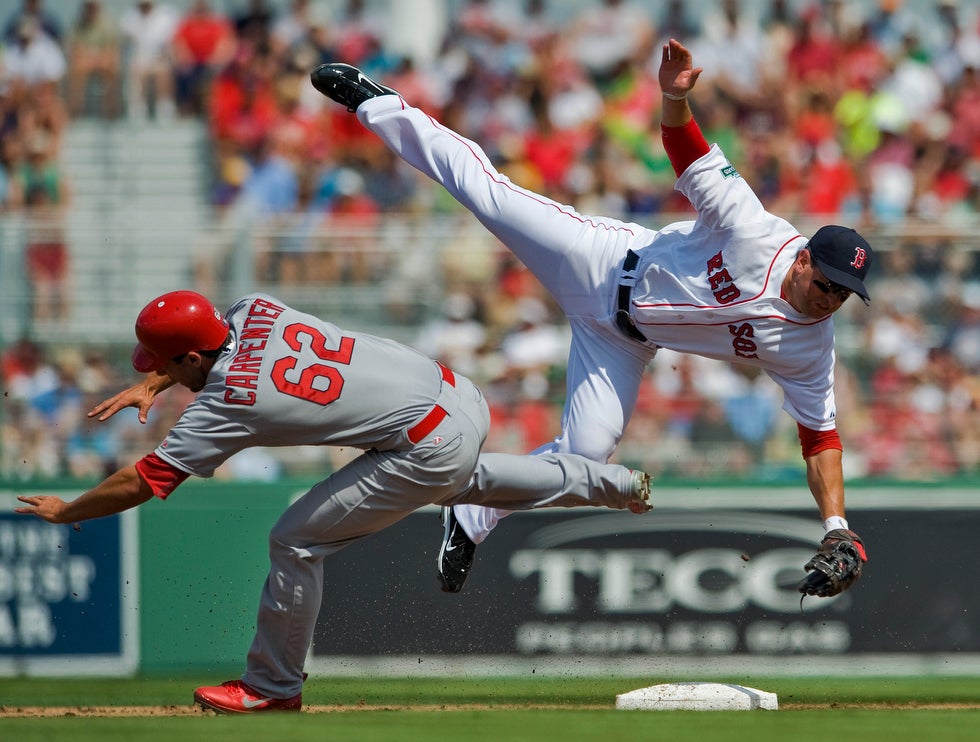 This impressive high-speed fast-shutter image, captured during a Red Sox vs Cardinals spring training game, was shot by Reuters photographer Steve Nesius. A former photo editor for the Associated Press, Nesius now covers a wide range of photographic assignments in the Tampa Bay-area for a variety of clients, including Reuters. 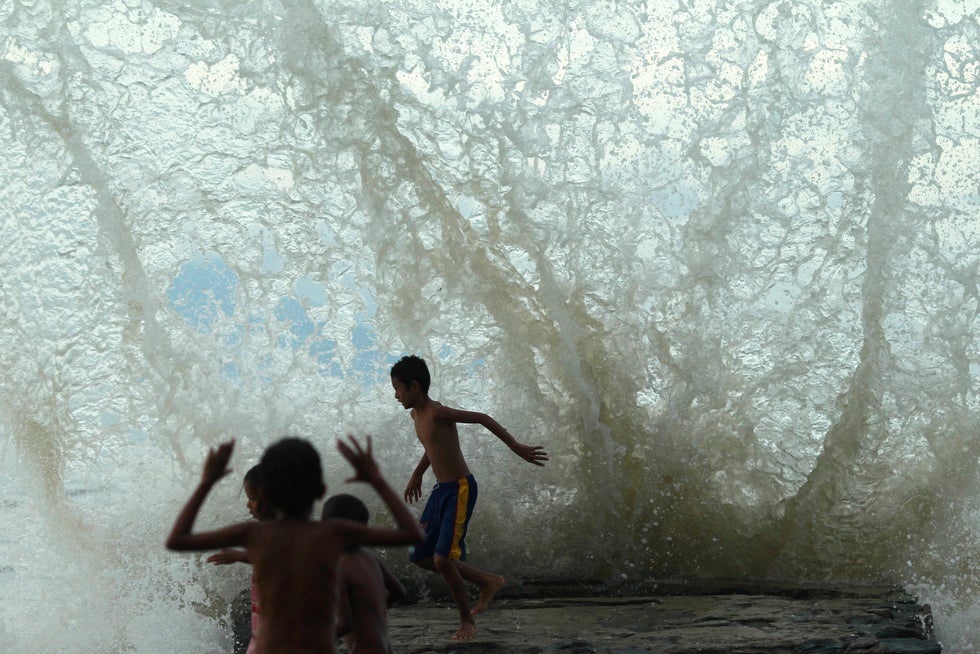 Eastern Timorese children run as water hits a seawall at Dili Beach on the tiny nation’s north coast. Reuters photographer Beawiharta, who made this image, often updates his blog page on the Reuters’ Website, you can keep up to date with his shooting adventures here. 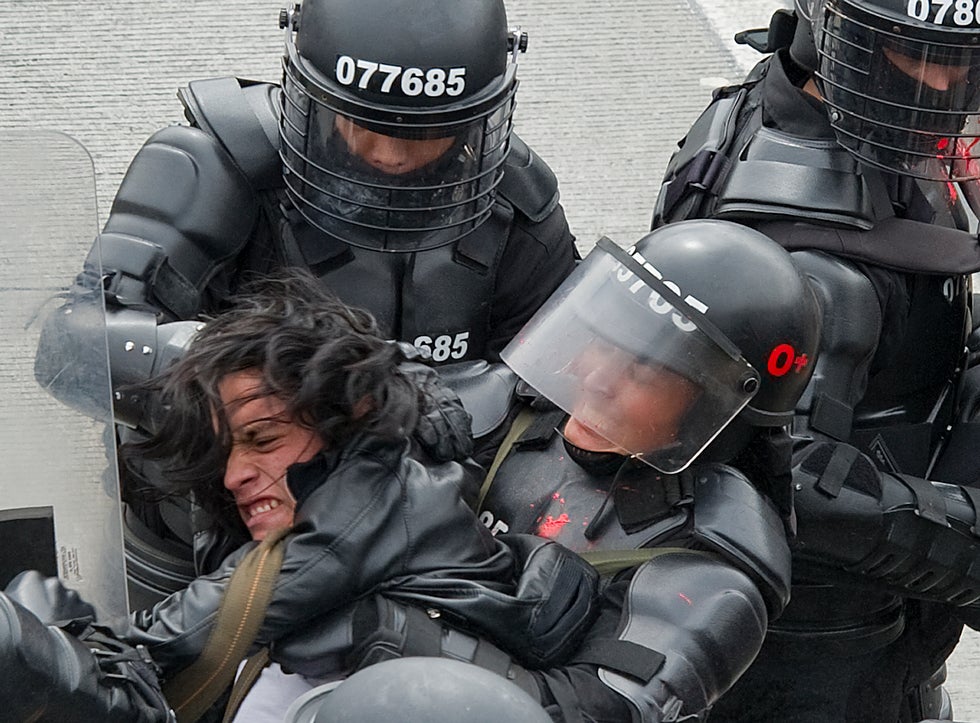 A student protesting against the high pr

Riot police arrest a student protesting Columbia’s public transportation system during a clash in the city of Bogota. Luis Acosta, who made the image, is a Getty Images staffer covering the Columbian region.

Reuters photographer Yusuf Ahmad made this photo of a worker carrying bags of rice into a storage facility in Indonesia’s South Sulawesi province as part of a story on food inflation in the region. You can see more of Ahmad’s images on his Lightstalkers page. 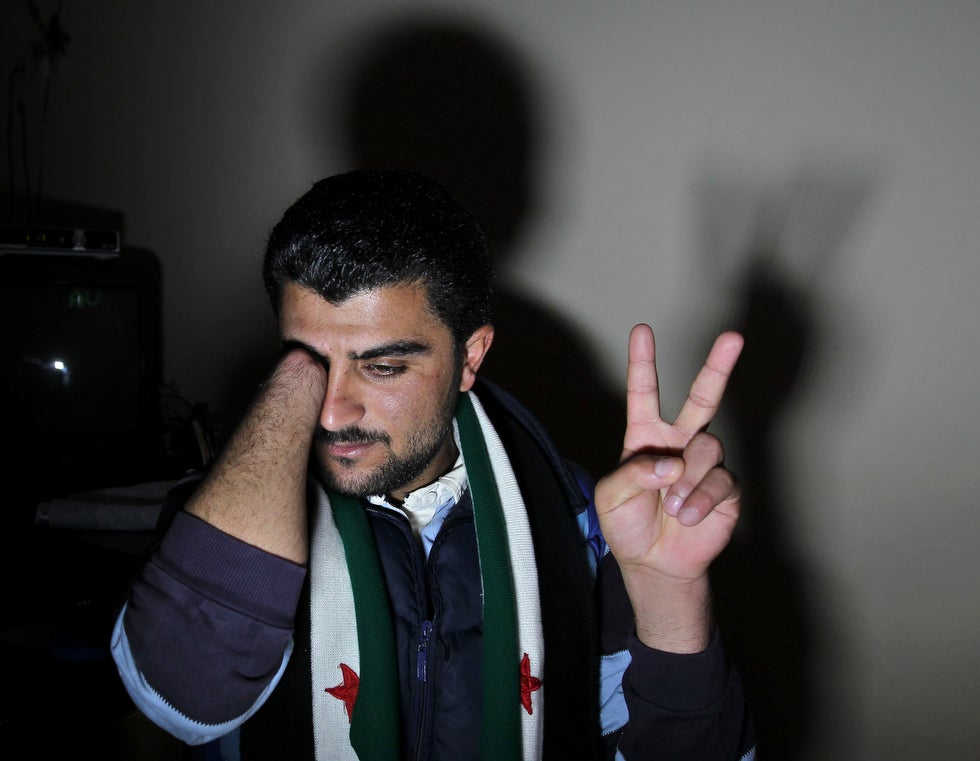 Zaher Al Hariri, speaks to the media in Amman

Reuters photographer Ali Jarekji captured this powerful image of Zaher Al Hariri, a Syrian citizen, speaking to the media, after an ordeal in which Syrian security forces chopped off his right hand at a local hospital. Al Hariri had originally gone to the hospital to address a bullet wound he sustained during a pro-democracy rally (fired by Syrian security forces).