Behind the Cover: Peter Hapak’s Double-Exposure Portrait of Christina Hendricks

“It was a constant marathon of concentration,” says Peter Hapak. The Director of Photography at Variety, Bailey Franklin, had called... 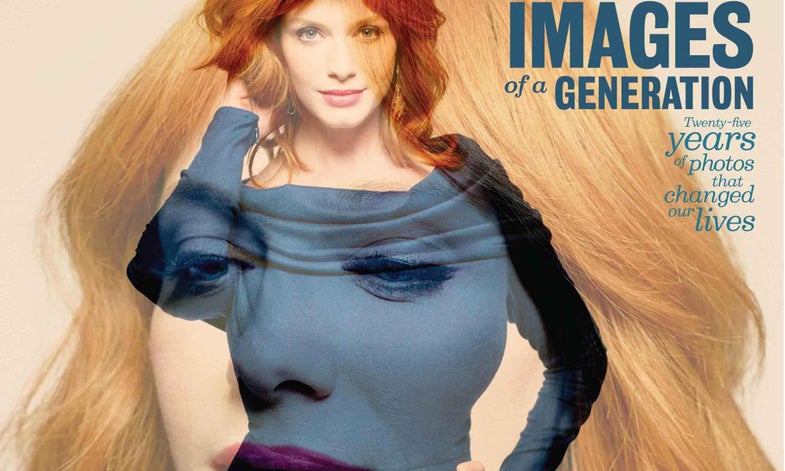 “It was a constant marathon of concentration,” says Peter Hapak. The Director of Photography at Variety, Bailey Franklin, had called him up and asked if, for his first assignment for the weekly entertainment publication, he would be interested in photographing 56 actors in two days. “I said of course,” he tells American Photo.

In a conference room, he created three different set-ups, shot color and black-and-white, and used strobes as well as continuous lighting. “We were basically jumping from one set-up to another,” he says. “Somebody had two minutes, others had five or 10 minutes.”

Along with this epic portfolio of Emmy nominees, Variety also asked the prolific portraitist and contract photographer for Time magazine to shoot three distinct covers for the issue, one of which featured the actress Christina Hendricks of the TV show “Mad Men.”

To offset the covers from the images inside the magazine, Hapak revisited a stunning multiple-exposure technique he had adopted during a recent and successful commercial commission with the artist Beck (see video below). He cited the photographer Eadweard Muybridge and art director Alexey Brodovitch as references for this method, but says he began honing an eye for layered imagery even as a child working with collages.

“The effect was really kind of magic,” says Hapak, recalling the first time he had exposed a roll of medium format film, reloaded it, and exposed each of the negatives for a second time. He had been photographing theater actors at the time, noting that performers seem to be uniquely qualified subjects for the method, perhaps given their necessarily multi-faceted personas.

During the Variety shoot, Hendricks may have proved this true. “She understands the camera and herself very well. Basically there were no bad directions, but there were many different directions that she was giving me,” he says. “She’s a very beautiful woman and a very interesting character. When those come together something happens, something unexpected. It was really nice to work with.”

Whether creating multiple exposures in-camera, or shooting single images to overlay in post production, Hapak says he starts off knowing almost exactly how he wants the forms and layers to turn out. “I’m zooming in and out on the subjects and trying to bring together those positions and ideas that were previously in my head.”

The fun part, according to Hapak, is exploring the images after the shoot and finding the unexpected. “That’s why I do portraiture,” he says. “You always start with a concept, an idea, but since you’re dealing with people, they are defining the final moment with their gestures, with their expressions. All these elements can define or change the original idea.”

The final images seem to draw the viewer in like none other. They offer an alternative way of thinking about what a portrait is and what it does for the subject. “It’s the overlay effect that’s playing with your eyes,” he says. “It pulls in your attention much more and you examine the image much closer, trying to understand what’s happening, and while you are understanding what’s happening you are discovering these details, these interactions. It creates a very different dimension.”

Hapak says he has and will continue to use the technique more and more, citing a growing interest on the part of clients and audiences wanting to see faces, products, and movements represented this way.

“This is not a technique I discovered,” he stresses. Hapak comes from a photography family, and “grew up in a lab” where he recalls his father experimented with similar effects in the analog process. “What I’m using is just a very contemporary tool to recreate what I had in mind and how I want to express myself. It’s just in a very different era.”