Be a Virtual Witness to the Iranian Revolution

Video games these days are not just about shooting stuff. Today’s finest games draw on compelling narratives and use realistic... 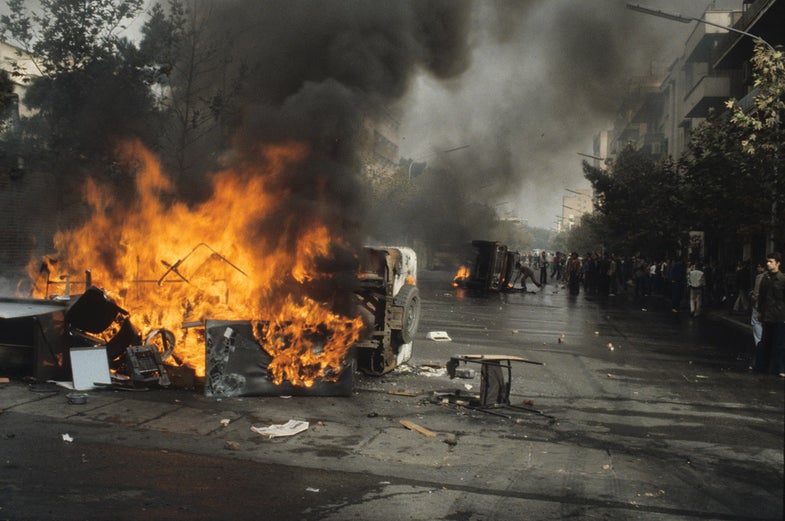 Video games these days are not just about shooting stuff. Today’s finest games draw on compelling narratives and use realistic graphics to unveil multifaceted stories. Case in point: 1979 Revolution, a forthcoming episodic game for iPad that tells the tale of the Iranian Revolution by using the renowned historical images of French photojournalist Michel Setboun. Another planned episode will focus on the events surrounding the American hostage crisis.

Setboun remembers that tension-filled era well. “It was not like being in El Salvador or Afghanistan—it was not a shooting war,” he says. “Not so many journalists were being killed.”

Yet it was a time of historic drama. Because 1979 is interactive, encouraging the player to roam the streets and alleys of Tehran, Setboun is pleased that the game will offer “a new way to use these old pictures for young people. It’s been 35 years, after all.” He adds that it’s important to share the photographic memories so the history does not fade. Not only have many details of the revolution become murky, Setboun says, but now “Iranian people love America—the culture, everything.”

The game’s creator concurs. “The people [in Iran are] no different from the people in New York or Helsinki,” says Navid Khonsari, who cut his teeth as a video director at Rockstar Games, makers of the billion-dollar-selling Grand Theft Auto series. “The main thing I learned [at Rockstar] was to over-deliver, to give people more than they expect.”

To achieve a level of realism, Khonsari asked Setboun for permission to use 40 photos to help tell the game’s story, which centers around the fictional Reza, a young photographer with no political allegiances. “He uses his photographic skills initially as a kind of thrillseeker, daring to put himself in the middle of something that could be explosive,” Khonsari says. “Eventually, he shifts from witness to participant.”

While games from Pokemon to Uncharted have used photography to help solve puzzles, 1979 uses Setboun’s work as both a game-play device and a way to delve into history. Khonsari notes that the control panel simulates a camera from the era, before the advent of digital. You focus carefully, read exposure levels, deal with the limits of 36 photos per roll. You mix chemicals and develop film. “And there’s always the potential of being caught by police,” he says.

Convincing Setboun to come on board was the least of Khonsari’s challenges. When a conservative Iranian newspaper heard that the game wasn’t completely pro-Iranian, they labeled the creator an enemy of the state. Khonsari, the grandson of a former Iranian culture minister, can no longer return to the country to do research or visit relatives. When he tried to raise funds in the U.S., some game makers told him they would give him money only if he would make it “more pro-American,” Khonsari recalls. “But I just want to tell an even-handed story.”

Setboun’s arresting images help. The game’s first photo—a stencil on a wall depicting the Shah of Iran with horns and fangs—is stunningly scary and politically charged. And there’s a key shot amid the Black Friday protest, a “quintessential moment when people feel like they’ve almost been defeated, yet the tension is at such a height that they feel they can almost do anything,” observes Khonsari. But there are also pictures of calm beyond the crisis: markets full of food and consumers haggling, people praying, families socializing while sharing a meal. “It’s not just about the violence,” Khonsari says.

With its first episode, “Black Friday,” due this summer, 1979 Revolution will let players step into a historic drama. “These pictures are mine,” says Setboun, “but the story belongs to everybody.”