The photographic pioneer's birthday is today, and Google celebrated with one of their Doodles. 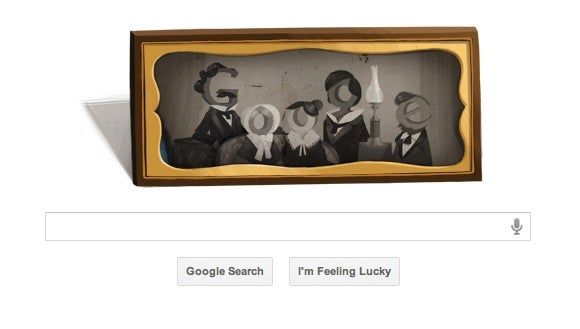 Today marks the 224th birthday of Louis-Jacques-Mandé Daguerre, photography pioneer and inventor of the dageurrotype — the first commercially successful and widespread photographic process. In celebration of this day, the logo on the Google homepage has been swapped for one modeled on a daguerrotype.

The famous technology was a direct positive print onto a silvered copper plate, and while wildly popular, it had the major downside of being extremely fragile, where the print could be rubbed off by simply touching it. Thus, the daguerrotypes were placed in boxes and frames, and hung so as not be disturbed. Rather than patent the technique and sit on the funds, in exchange for a lifelong pension Daguerre gave the rights to the French government, who released it “free to the world” on August 19, 1839. Daguerre is thought to have taken the very first photograph of a person, and while the technique was only widely used for around 20 years before newer technology replaced it, it popularized the photographic medium around the world.